I could have grabbed a perfectly aligned image from their website, but I wanted to find one in the wild, which proved more difficult than I expected.  They're disturbingly common, especially in the places where non-bigoted signs are stolen as soon as the non-bigot's back is turned.  (That's not, strictly speaking, legal yet I doubt any arrests will come of it.)  Anyway, after going much farther than I thought I'd have to, I saw a political sign I'd never seen before, cheaply designed and with only two colors, as if whoever put it out couldn't afford three, I wondered what it could be.  When I realized it was a Romney sign I thought that surely I'd be able to find some of the hate I was looking for in the area, so I headed over and sure enough found this: 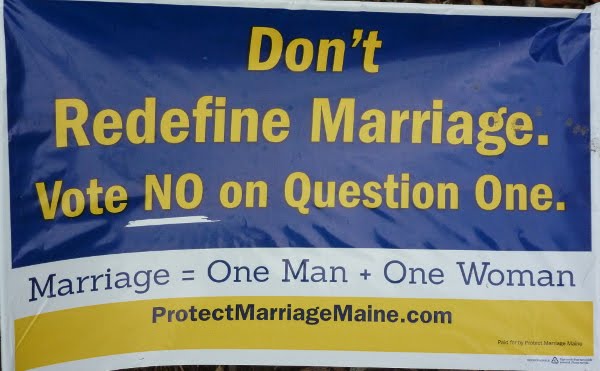 Did you catch that?  I may have to turn in my math major card because it took my mother pointing it out for me to see it.  At this point I'm just so used to hearing, "Marriage is between a man and a woman" that my mind sort of glossed over the words and symbols used.

What the sign presents is an equation with an equals sign.  In so doing it defines marriage.

An equals sign means both sides of the equal sign are exactly the same thing.  You don't get to say 2 + 2 = 5, and then argue that it's true because, hey, if you add a one to it then 2 + 2 does equal five.  Equals signs do not work that way.

Take the adult population of the world (so we're talking about men and women not boys and girls) pick two at random.  Put them together.  (In the same general place at the same time, no Frankenstein's monsters please.)  There's about a 50% chance that, according to the makers of the sign, that counts as a marriage.

The makers of the sign have redefined marriage to mean any pair of people in which one is a man and the other a woman.  Any pair.  No other requirements.

That is a radical redefinition of marriage.
Posted by chris the cynic at 3:56 PM

Email ThisBlogThis!Share to TwitterShare to FacebookShare to Pinterest
Labels: I have a blog, politics, Silly