So I just saw this ad: 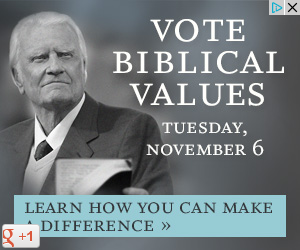 Now, first off, that would be illegal.  'Round these parts November 6th is known as "Well you sure as Hell put it off till the last minute, didn't you?" day.  That's not actually true, but I did already vote and the ad isn't exactly being truthful either.

I'm not talking about the ad purporting to be from Billy Graham even though as near as anyone can tell all of the letters supposedly from him of late have been written by others and the sentiments expressed in them place these letters in direct conflict with the 93 year old's actual words and deeds.

I did not see a place where I could vote to require people to build a parapet around every roof they make to prevent the bloodshed of someone falling off of it (Deuteronomy 22:8, if you were wondering).  This is of particular interest at the moment because I recently heard the story of someone dying by falling off a roof (though have forgotten the exact details at the moment.)

I did see a place where I could love my neighbor as I love myself and since that's a biblical value I agree with I did vote in favor of legalizing same sex marriage.

But for the most part, not much in the way of biblical values on the ballot, just a bunch of candidates running for this or that.
Posted by chris the cynic at 8:16 AM

Email ThisBlogThis!Share to TwitterShare to FacebookShare to Pinterest
Labels: I have a blog, politics