The came across a machine built around a violin, complete with bow.  The machine featured a lot of actuators and a complete lack of any aesthetic sense.  At the moment it wasn't doing anything, but the monitor attached to it featured a continuous scroll of code.

"What's it saying?" the human asked.

"I wouldn't call it language," the android said, "but if I'm correctly interpreting the intent behind sharing these specific outputs, its microphones have all failed, rendering it unable to determine if it is playing in key.

"It seems to be quite distressed by this development, and --if I'm interpreting correctly-- is requesting repairs.  Repeatedly."

The human nodded at this and then took off its backpack.  "Tell it that the new ears I'm giving it, though better than nothing, are pretty crap."

"We have other priorities," the android said.

"Won't take but a minute," the human said while rummaging through the backpack.

"It will take significantly longer than a minute."

"You shall have to educate me, at some point, on the difference between a figure of speech and a baldfaced lie."

"Just make sure it knows to expect low quality replacements," the human said.  "I don't want to get its hopes up and then--"

"I do not think that it has hopes."

The android ignored the machine's keyboard and connected itself to a port while the human started to work on the machine.

"I have relayed your message," the android said.  "It is repeatedly indicating that processes are requesting audio input and receiving none.  I note that these processes are discretionary in nature, and there is no reason to run them in the absence of input."

"It wants to hear," the human said.

A few minutes passed in silence.

Finally the human finished working and said, "That should do it, two new ears--"

"Back up communicator microphones are not ears," the android said.

"--and you should be hearing."

The machine responded by playing the violin ensconced within it.  What it played conformed to no existing style of music.  The note lengths followed no pattern, it exhibited no structure, most of the pitches weren't on any scale, and it certainly didn't have any identifiable time signature.

In the human it evoked and abstract and jumbled sense of joy.

"I think it's happy," the human said.

I have no idea why the human and android are going through the kind of place where one might find a violin bot in need of maintenance.  Nor do I know why the android is being snarky.

I was looking at something, and something led to something else, and the somethings kept on piling up until I came across a robot that plays the violin.  This, in itself, is nothing new.

The 1910 World's Fair had "self playing violins".  In fact it was three violins, each with only one string, that were all played by the machine in which they were mounted.  This obviously leaves one with serious questions.  Questions like "If this method could only play one string per violin, why didn't you install four fucking violins?"

Questions about playing a four stringed instrument with three strings aside, though, its worth noting that it didn't take long to go from "Let's make a piano into a computer, and have it play songs when fed the right program" to "Let's do that with violins too."

Given that the stock market crash completely killed off the player piano industry (higher quality phonographs as well as radios had already wounded the industry), and that the self playing violin existed only as a luxury feature on certain player pianos, the dream of robots that played violin sort of disappeared.

That's what I found myself looking at: 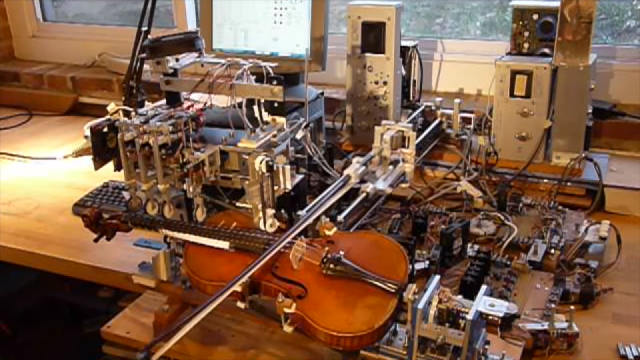 Here's a video.  (That links to a portion where it's playing for a bit, if you want an explanation of how it works and such, go back to the beginning.)

And that left me thinking thoughts, some of which led to the above.

Something not featured above was imagining the evolution of player and instrument.

If you want a robot that plays violin, and making it a good violinist is your only concern, there's a lot of ways you can go about that and none of them look particularly humanish.

Imagine that you took that as far as it could go.  Multiple generations of refinements, improvements, and innovation until diminishing returns meant there really wasn't much more room to improve.

Then take away the violin (bow too.)

Then, without a violin in mind, have someone design an instrument that takes full advantage of the form and functioning of the robot.

Already we're probably talking about an instrument unlike anything anyone would ever design for a human being.  But there's no need to stop there.

No matter how well the new instrument is suited to the robot, if you'd started from scratch with the intention of building a robot to play the new instrument, it probably wouldn't end up like the violin bot.  So do that.

What sorts of things do you end up with when the process has been going on for a while?  (Both in terms of robot musicians and in terms of the instruments they play.)

I have no idea whatsoever.  Seems interesting though.
Posted by chris the cynic at 5:32 PM 1 comment:

Email ThisBlogThis!Share to TwitterShare to FacebookShare to Pinterest
Labels: Original

It's been two years

So that this won't all be doom and gloom, here's some good news:

I wrote something.  Its not good, it's 15 pages of people taking in circles with an abandonment / betrayal based breakdown and some comforting through hugs and such.  It was supposed to be a quick "I'm going back home, I need you to watch this magical object that keeps the connection between our words active" and that was it.  Didn't turn out that way.

What it did do, what gives me hope, is that if flowed.  That's something that hasn't happened in a long time.

If you want to read it, it's here.

Two years and two days ago, but in the evening so not a full two days, I broke my ankle.  I've talked about it a fair amount.  Slipped on the top step, ended up on the basement floor, broke it in three places, needed a plate and a screw installed.  And it used to be my good ankle.

At this point it's very, very clear that the ankle itself was the least of the resulting problems.

You see, two years an two days ago in the morning and afternoon, I was the best I can ever remember being.  That's not the same as "the best I've ever been" because there was a time, as a child, before I had depression at all.  I have only snippets of memories from that time, and none of them really give a good sense of my overall mental state.

Being forced to be sedentary is usually not the best thing for depression, but the larger problem was bloodclot risk associated with surgery and post-surgery.

I had to go off of my hormones and the effect was . . . very similar to going off my depression meds.  It wasn't the same, and I doubt very much that I'd ever confuse one for the other, but those two things are in a category on their own that nothing else really compares to.

Eventually I was allowed back on hormones and things improved.  I was so relieved at the improvement that I thought it was over.  It wasn't, but I probably spent a year telling myself that I was back to normal and never acknowledging that, while significantly better than being off hormones, the state I was in was pretty definitively crap.

In the middle of last year, I had a series of breakdowns that led to me finally realizing that my mood had never recovered from the stuff surrounding my ankle breaking.

At around the same time, things got worse.  The big thing was that the Cape Elizabeth Land Trust did their backstabbing.  (The house and greenhouse have been demolished, by the way.)

Things got worse and they didn't get better.  Every so often I think that might be breaking.  Look at the note I have to remember to attach to the top of the post pointing out that, while not particularly good, I did recently manage to write something.

Every time I've thought it was breaking, though, I turned out to be wrong.

So I don't know.  Maybe I'm finally moving back to bad and away from worse.  Or maybe it's another one of those times when you get your hopes up only to have them shattered in a way that hurts all the more than if you'd never had hope in the first place.

What I do know is that I've spent the last two years barely functional.

I've been on hold.  The world has not.

My father's father has died.

We lost the farm including the part that we were very definitely supposed to keep as promised at every stage of negotiations.

That loss meant my sister was driven from her home.  Since she didn't have much time to look for a place to go, she settled for a place that was in a pretty terrible state (with the intention of fixing it up.)  Turns out that it was even worse than it looked (to everyone, including the inspector.)  Very much so.  It's not a long drive for being in a different city, but it's enough that I never see her or my nephews or my niece.

There was no Christmas or Thanksgiving last year because of how spread out the family has become.  Don't know if I'd have been able to take any joy in them if they had happened.

Other people have had changes that I'm not sure it's my place to talk about.  (They're not in my immediate family.)

All around me everything seems to be falling apart and I'm completely helpless.  I only ever leave the house for appointments, sporadic food shopping, and when I need to catch a bus to visit Lonespark.

I've been failing at taking care of myself so very hard.

My appetite went away, and I tried to stay on top of getting enough food, but last week or the week before (everything runs together) I discovered that I'd been failing at that.

Undernourishment will augment depression pretty hard.  So will dehydration.  Or sleep deprivation.

It's been two years, and that's way too long.  I want this shit to be over.

During that time my psychiatrist moved to a different practice, which means that while we should have been trying to adjust meds and such I was instead trying and failing to actually connect with the replacement.

Now we finally are working on it, but the process is slow.  "Let's make a slight change and wait a month to six weeks" slow.  And if I can't stay on top of the "eat-sleep-drink" trifecta that'll mess everything up and we might not be able to tell what works from what doesn't even at that snail's pace.

That's where things stand.
Posted by chris the cynic at 11:03 AM 1 comment:

Email ThisBlogThis!Share to TwitterShare to FacebookShare to Pinterest
Labels: Depression, I have a blog
Newer Posts Older Posts Home
Subscribe to: Posts (Atom)