My sister is back in her home, I'm back in mine, and there are puppies

All told, my sister was in the hospital for several hours less than two weeks.  I spent almost all of that time away from my home.  Most of it was at her house, but for several days at the end I was staying across the street from the hospital.  (There's an apartment building set aside for the loved ones of patients who don't live in the area.)

At no point in that time away from home did I sleep well.  It's over a week and a half since I got back home, and I'm still not sleeping right, which leads to not eating or drinking right, and also getting my medication schedule all screwed up.  Which is part of why it's been over a week and a half since she got out of the hospital and I'm only just now publishing a post saying she got out the hospital.

So, all of that said, she seems to be doing pretty well, though she's actually back in the hospital today for minor surgery.

The day she got out of the hospital she gave an interview to a woman named Donna Perry.  You can read the resulting article here.  You can also read it in several other places, which come up well before that on Google, but that's the newspaper Ms. Perry actually writes for.  There's some stuff in there that I didn't know about until I read the article myself.

People have a tendency to want to help someone after something goes wrong, and if you can afford to and you want to, there are three ways you can do that.

The thing that would (probably) get her help the fastest at the moment is this Amazon wishlist, since if you pay for something on there it'll be shipped straight to her house right now.  She had me set up Paypal and Ko-fi accounts too, but I don't have the information needed to connect those to her bank account, so any money donated is going to have to wait until she gets around to that.  (If you happen to be reading this in January, though, presumably that's been done.)

On the subject of Amazon wishlists, anyone reading might have noticed that everything I've been writing has had an MLP bent for over two years now.  If you'd like to help me in that arena, I set up a list that has reference books along with a few RPG things that I'd use as reference books.*

Lastly, puppies.  Thirteen were born the day before my sister's birthday.  These were taken when they were three days old: 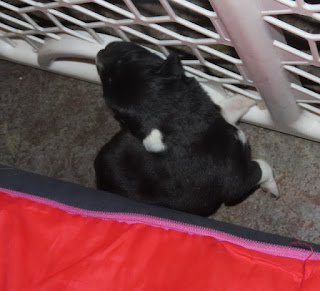 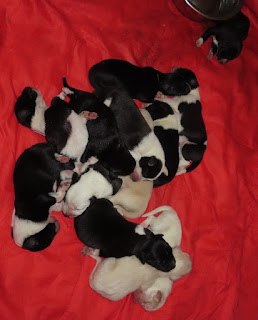 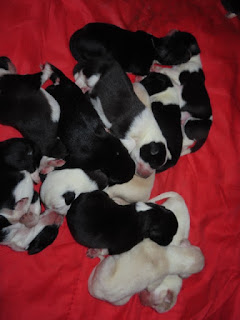 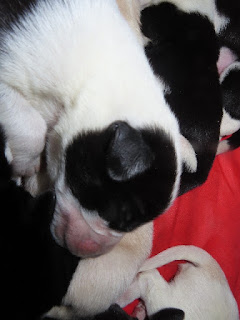 * I mean, I could try to use them as intended by actually running a game, but:
a) I've never done anything like that before
b) I'd have to wait for my sister's younger two to be old enough. (Once upon a time I was told eldest loved all things unicorn, but if it was accurate, it appears to have stopped being true since then.)
Posted by chris the cynic at 8:55 PM 1 comment:

My sister was run over (by her own truck)

[Getting run over isn't a pretty thing, I'm going to be talking about the aftermath.  This is your warning, read at your own risk.]

It happened on Tuesday, much of the information I've been given was third hand (I didn't go up to my sister in the emergency room and order her to regale me with the story of how she got there; I didn't do that in the ICU either), so it's possible some details are off (or missing) but I'll tell you what I know.

The daycare my sister's middle and youngest child attend is one of those smaller more personal affairs where it's run out of the provider's home.  That home is on a hill.  Maine, especially non-coastal Maine (after losing the farm, my sister's family moved inland), is cold in late November.  To keep the kids from freezing, my sister left the truck on (and thus the heat on) while she got them in.  The middle child, a three year old, knows how to unbuckle himself.

In what is, so far as I know, his first time shifting gears in his life, the three year old put the truck in neutral.  My sister's luck being what it is, she was down hill from it.

Email ThisBlogThis!Share to TwitterShare to FacebookShare to Pinterest
Labels: I have a blog
Newer Posts Older Posts Home
Subscribe to: Posts (Atom)