What I've been doing for the past week

The careful observer will note that in the past week I have written all of one thing, and that thing was the Deus Ex post I wrote today because I didn't want to go another week without a Deus Ex post.

I've spent most of the week, which was a vacation from university, working on a project to make a puzzle.  Not as in jigsaw, much more along the lines of a Rubik's cube.  I suppose if I were a traditionalist I'd make my puzzle out of wood (Ernő Rubik made his original cube out of wood) but I don't have wood working skills or tools so I make puzzles out of plastic.

I use Alumilite products, and had some left over from the old days but I discovered, to my dismay, that the silicone rubber I use to make my molds apparently will not age perfectly if you leave it sitting untouched for years on end.  So first I had to get more of that.  That took some time.  The casting resin I use does apparently last (either that or it was more recent than the rubber, but I think they 're the same age) but I ordered more of that too.  (It just occurred to me that if this does sound interesting to anyone, I should probably point you to a starter kit that has everything one would need.)  While I was waiting my plan was to try to use some molds I had left over from times before with the resin I had to get a start in making some stuff, but that turned out to be a lot of frustration.  I made the molds before I knew some tricks I now know to make casting a less aggravating process, though I definitely get aggravated anyway.

I also learned that the type of puzzle my plan called for modifying, a Rubik's Revenge which is like an ordinary Rubik's cube but is 4x4x4 instead of 3x3x3, no longer exists in the form I was planning on using.  You can still get it, I think.  I'm pretty sure this is the style of Revenge I was thinking of, but the shipping costs as much as the puzzle and I'd rather not make something designed to fit an out of production thingy.  So when the new Revenge arrived at my door, I took a look, found that it had been changed in a pretty big way, and realized that that set me back another day.  (The puzzles arrived after the silicone rubber.)

On the plus side the new version is a better puzzle in that it is less likely to fly apart in your hands and it is also more likely to work the way I want it to work if I can get my modifications done.  (On the down side it now costs twice as much.)

Anyway, then it came to pass that I was finding myself running low on vacation and still hadn't even gotten through the Ovid I was supposed to do, much less the Vergil.  So I had to put that whole project on hold for the time being while I try to get the Latin addressed.  I'm hopeful that next week I'll be ready to say, "Hey, look what I did," but for the moment everything is way too incomplete for me do to something like that, so I'll just leave you with some pictures, because I have a new camera.  I did not expect that since a camera with warranty costs about as much as filling up the heating oil tank on the house, but it's definitely a gift I appreciate.

(Though I still miss the old camera.)

This is a past project, on the right is the top half, on the left is the more or less identical bottom half that didn't get disassembled quite so cleanly: 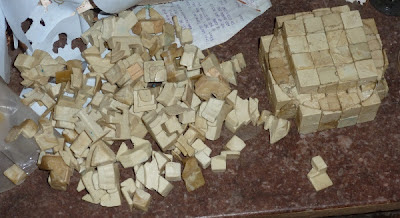 The ball in this picture is what I took apart that past project to get at.  Most of the rest is something called a dogic: 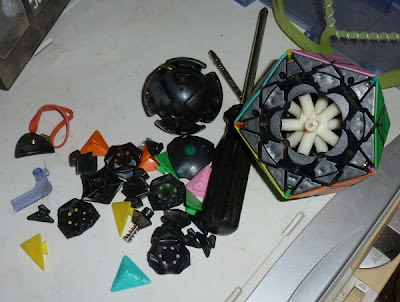 These are some molds: 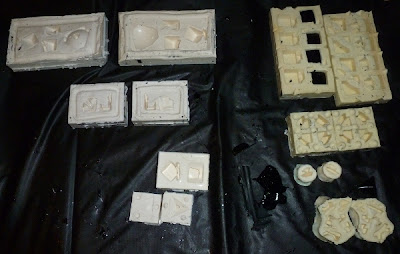 This is what happens to the plastic that doesn't get into the mold: 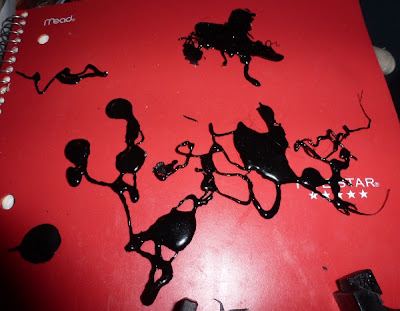 I didn't spill it on the notebook, after it hardened I picked it up and moved it there.  My sister thinks that the blob toward the top looks like a headless crow.  The Headless Crow obviously is famously known for his rivalry with Ichabod Crane.  Of course the fact that cranes are larger than crows makes one wonder just how scared Ichabod would be of a crow that didn't even have a beak with which to peck him.

Finally, I had forgotten about his until I looked through pictures, but I had tangerines.  You know what that means?  If you answered, "It means you have enough seeds to start an orchard," then you're correct but it's not the answer I was looking for.  If you answered, "You made a lamp," then yes.  Yes, I did.  And this time it actually worked how it was supposed to: 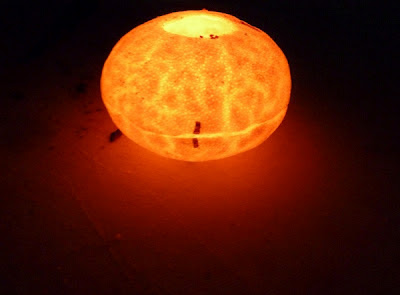 There's not a candle in it this time, that's composed entirely of tangerine and canola oil.  And flame, of course.
Posted by chris the cynic at 4:14 PM