I have a headache. Also a cat. The two are unrelated.

I have a headache.  My sister took the Excedrin promising to get more in return for taking what there was, then there was an Excedrin recall.  I haven't heard about the possibility to getting more headache medicine since.

I was hoping to get at least two posts written today.  One finishing off the first episode of .hack, another finishing off the second map of Deus Ex training.  My brain is not really working though.  I did get six things that I had previously written but not yet transferred onto the blog up, so that's something.

If you haven't been following the situation over at the Slacktiverse, I think I envy you.  Even if you're only tangentially involved it's still incredibly draining.  I haven't read most of the posts, I haven't been keeping up all that closely, it's still sucking the life out of me.  I should probably take this moment to point out how awesome the moderators over there are.  I'm not sure, but I think if I had one of their jobs I probably would have curled up into a ball and hoped that the internet and indeed the world at large would go away if I just ignored it.  Not only did they not succumb to the pressure, they stayed remarkably on top of things at times dealing with problems within mere seconds.  So, much credit is due the Slacktimods that make up TBAT.

So, anyway, I have a headache.  I'm not sure when I'll write what I've been meaning to write.  Hopefully today, we'll see how the headache goes.

I also have a cat. 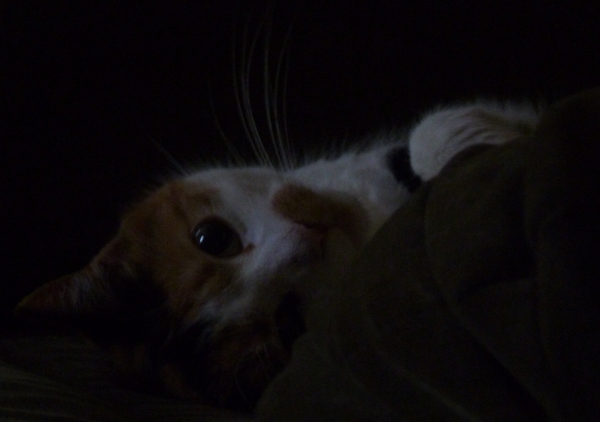 I believe it's traditional to have pictures of cute animals in times of troubles.  It's very hard to get a picture of my cat being cute, she usually stops when the camera comes out, but I think in this case she thought the lighting was bad enough for it not to matter or something.

So that's my contribution to having things nice on the internet.  Also Fred Clark recently posted a link to this video of Ellen DeGeneres in something called a Hawaii chair.  It is hilarious.

Anyone reading have any contributions of niceness on the internet?
Posted by chris the cynic at 4:10 PM