I have a tendency to get into ruts. It's not on a Bella Swan level of never doing anything other than cooking, cleaning, and rereading the same handful for books, but I can definitely get repetitive. Sometimes this involves pictures. If I stop and admire and orange mushroom and decide to take a picture of it there's a decent chance that will leave me taking a picture of every single fungus I see that day. Some of this because it's easier for me to take the picture than it is for me to decide whether a given picture is worth taking. Some of it is just that once I get going I find it difficult to stop.

It can also involve editing pictures. If I start modifying a picture I'm probably going to keep modifying it for a good long while. Perhaps all I mean to do is crop it and adjust the color so that it doesn't look washed out, but pretty soon I'm playing with all manner of things and I just don't stop.

When it comes to the sparklegul I did manage to stop. Not before I'd made a version where the water was purple and the sparkles were green or various other versions with strange colors or other interesting features.

Then I didn't touch it for a long time. At some point I came back to it. Last night when I decided to make this post there were 105 different versions of the image on my computer. I made two sort of excerpt pictures so that I could show portions of in in detail, and then I got distracted again. Now there are 26 others. So that's, 131 different versions of a single image, not counting the detail portions. Of course, those are just the ones I saved. And I've just realized that I left some out of that count because they're saved as vector images and I didn't count those. So there's that.

I don't really have a basis for comparison, for all I know everyone makes more than hundred versions of a picture when they sit down for a simple edit. Somehow I doubt it but the possibility is there. It certainly is nowhere near the biggest rut I've been in.

Anyway one of the the things I mentioned before is that I'd come across a way to make something that looked like brush strokes once upon a time but I couldn't figure out how to recreate that. I still haven't and I'm wondering if maybe what I did then only applied to the particular image I did it to. What I have found are some other things I could do.

Starting with a more colorful version of the sparklegul I tried a preliminary version of something and found that it definitely didn't look like brush strokes. I have no idea what it does look like, but I find it pretty, here's an upclose shot of it because if I scale down the whole image the fun stuff will be lost in the shrinking process: That led me to something else which I think does look somewhat like brush strokes, though could be fooling myself. I don't think it looks like them if you examine too closely, but if you look with an uncritical eye and have some imagination I think it does. So keep disbelief suspended and have a look: 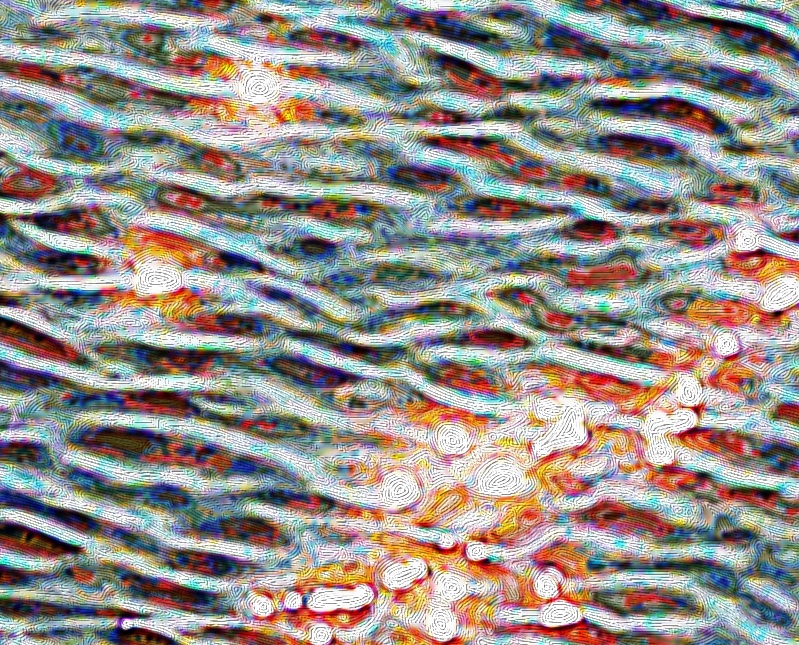 After I made that I had dreams of being able to create Starry Night automatically. So far no such luck with other stuff, I've tried, but I can dream, right?

At this point I've been looking at variations on that so much that I can't close my eyes without seeing the little lines that make up the pseudo-brushstrokes.

If I remember how blogger does things correctly, I should be able to attach the full sized images to this post and have it scale them down automatically (which will make it impossible to see the fun bits) and have the full sized versions open if you click on them.  In the same order as the samples above: 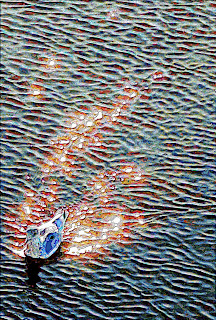 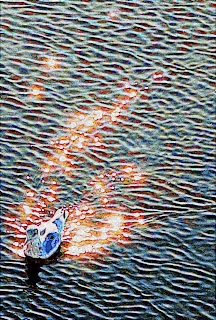