[Added] Apparently you can't post extremely large pictures with blogger, so the actual images have been scaled down to less than half of their original dimensions.  Specifically, the X and Y dimensions have been reduced to 44.625% of what they were, resulting in images about twenty percent the size of what I tried to post.  Also, for some reason unless you choose to open them in a new tab or window it looks like you don't even get to see that, instead you see a version even more scaled down.  To a certain extent I understand, it's generally a good thing if the whole image can fit on your screen, but if I'm trying to show detail it kind of needs to be huge.  So, anyway, that's how it is. [/added]


When I said that I was seeing the lines from the pseudo-brushstrokes of my modified sparklegul when I closed my eyes I was serious. I'm actually seeing them with my eyes open as well, anywhere where there's low enough information and enough noise to create arbitrary shapes, I seem to be seeing them.

But I'm sort of getting ahead of myself. This post is really the story of how I went from this: 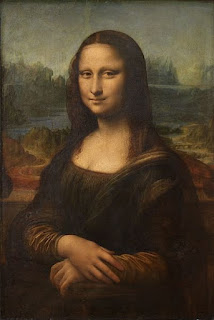 A random picture on my computer to these: 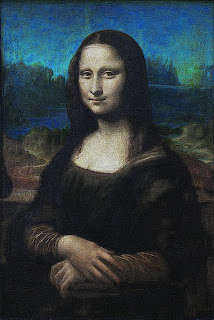 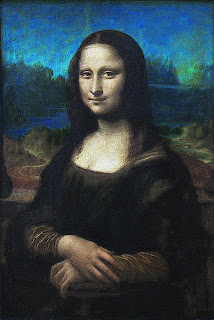 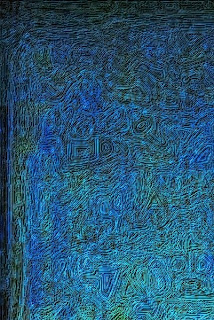 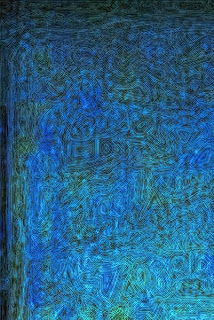 I think the original picture was on my computer because I was wondering about the possibility of making an iconic picture out of marbles, and the picture is notably iconic. I came to the conclusion that it would take a lot of marbles. Anyway, I picked the smallest version of the picture on hand, and then scaled down. This the small version above was the biggest version I had on my computer.

I didn't go to the interwebs to get a larger version, of which there are many, because I was just supposed to be doing something really quick and I didn't see the point anyway.

From the original I made the lines that I would use for brush strokes, but I didn't really quite like how that looked, in particular the lines seemed to have a habit of running together when I tried to apply them to the image. That did not look fun.

So I tried various other things, what finally worked out for me was using lines to combine lighter and darker versions of the image. They did not blur together when doing this.

Also, at some point in here, I happened to hit white balance and the possibilities opened up before me.

So, I made version of the image, original side, that was all lined up, then I scaled it up (almost exactly three times larger in each dimension) and repeated the process. Then I scaled up again (this time only by a factor of two in each dimension) and repeated again. This did not really give a quality of brush strokes, more of a sort of colored line are, except if looked at the lines without the color it's a mess. (You can still make out quite a few features though).

Using a similar process of working in steps allowed me to create a texture that doesn't run together, but I still haven't decided whether I prefer the thing with or without the texture. With the texture it looks messy, without it looks flat, I'm not sure which is better. Hence the two versions. Of course, there are more than two versions.

In my newly created Mona Lisa folder there are now 180 files. Not all of them are necessarily things that are suitable for final consumption, some of them are intermediary steps and such, but I've still got a bunch of versions.

In fact, originally those two weren't supposed to be the final versions. When I made this image: 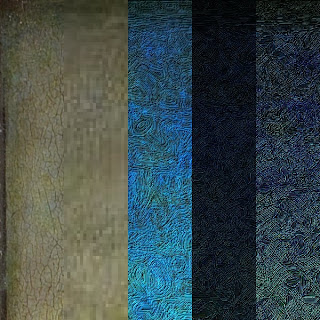 as a demo the middle slice came from what was then supposed to be the final version. The idea behind using the upper left corner for a demo is that the only thing that changes between images is the fine details (the overall shape is always the Mona Lisa) so I could pick any section for a demonstration, the upper left corner is the easiest section to pick.

So, in the demo, from left to right, we have what the actual Mona Lisa looks like (turns out that the the image I started with was a scaled down version of something almost exactly the same size as what I ended up with) then the image I started with which, you can see, is pretty crap. It's been scaled up for the purposes of comparison. Next is was what going to be the final version before I moved on to what I've got now, then a modification of that, then a modification of that.

And then, still thinking that the middle version above would be the final thing, made another demo block of five other things. The last had to be scaled up because it was originally half sized. 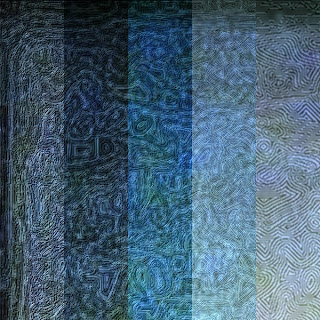 Anyway, I have updated the Mona Lisa. More than once. No doubt these destroy everything interesting about the Mona Lisa, but I never liked that thing much anyway. 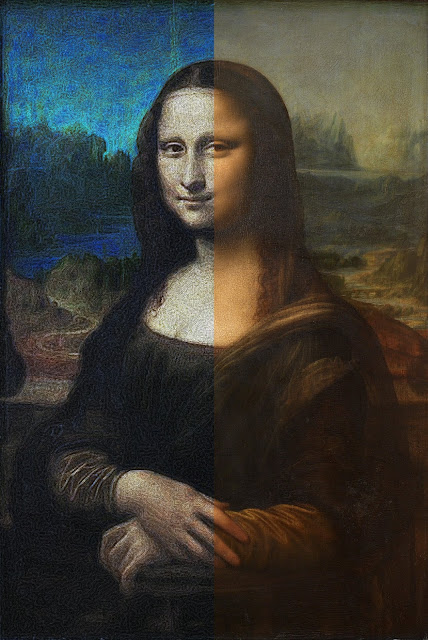