The weather is here; wish you were beautiful (images)

I don't know who had the quote, I heard it second hand from my dad.  Obviously it's a play on, "The weather is beautiful; wish you were here."

Anyway, suddenly being low on heating oil seems a lot more immediate of a concern.  I try to allot myself two hours for walking to school, but it takes closer to an hour and a half.  As a result I have a pretty good feel for how cold it's been, and the answer is nothing like this.

My outdoor thermometer is borked, I have no idea how cold it really is.  Fucking cold.  An online weather site tells me that it feels like 4% Fahrenheit, that I can buy.  It goes on to tell me that much of that is due to windchill.  On that I call bullshit.  There is no wind.  Not where I just had to shovel through shoulder height snow so my house would have an exit.

Actual temperature of 17 degrees my ass.  Two days ago I had to take the long way home to pick up medication on the way; it took a little over two hours and the temperature at the start, before the sun set, was 18.  It was nowhere near this fucking cold.  Not even at the end.  Well, maybe toward the very end.

Anyway, what has motivated me from coming out of my hiatus is, basically, that I took some pictures.

Looking out the front door in the morning yesterday: 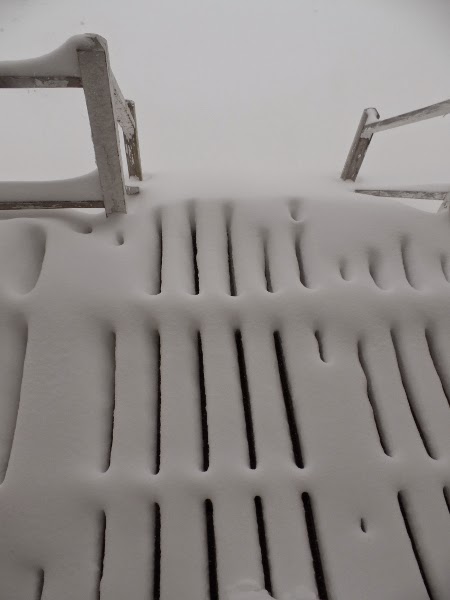 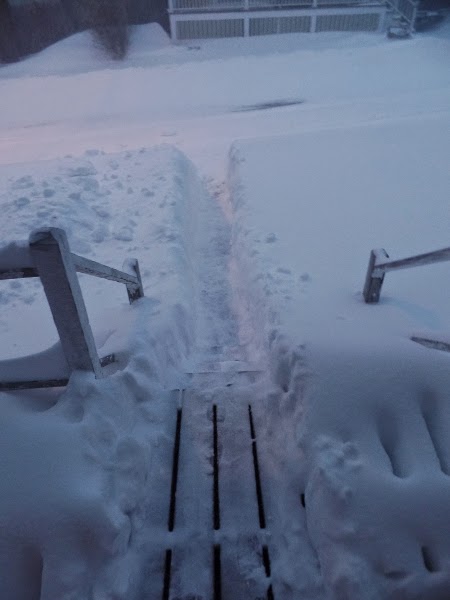 Obviously that image is looking down, how about a level shot: 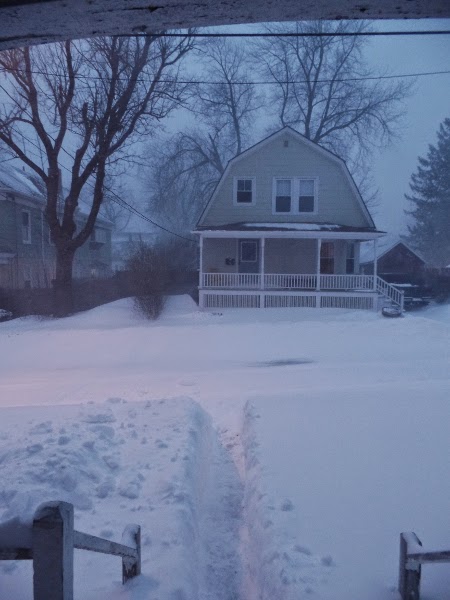 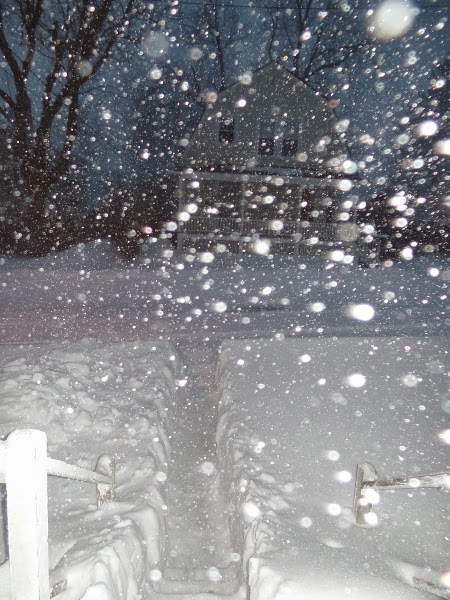 After seeing the snow in the picture with the flash, you can probably guess that the path didn't last.  Here it is at night 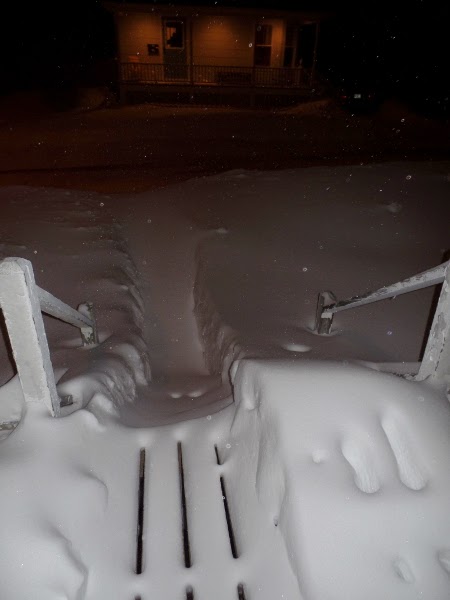 And if you were wondering, the snow hadn't stopped, but it had turned into a much finer snow.  Which is sort of going back to the beginning since when it started it was almost a frozen mist.  Anyway, flash picture of the change in snowflake size and density: 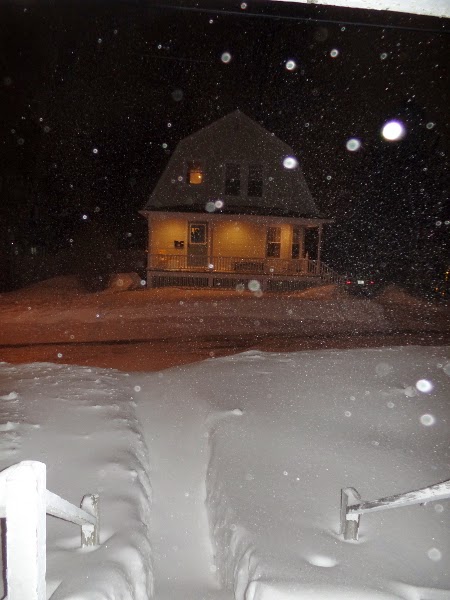 That brings us to this morning.  Now my camera does have a panorama mode that would have made taking this show easy, but flash was required because the day wasn't yet bright enough to get a good shot without it.  That is why you will see --not one, but two-- obvious seams in the image that follows.  As for why the top seam is crooked, I didn't want to cut off the railing tops, but had apparently moved between shots just enough to make it impossible to connect the images without doing that if I used a straight line. 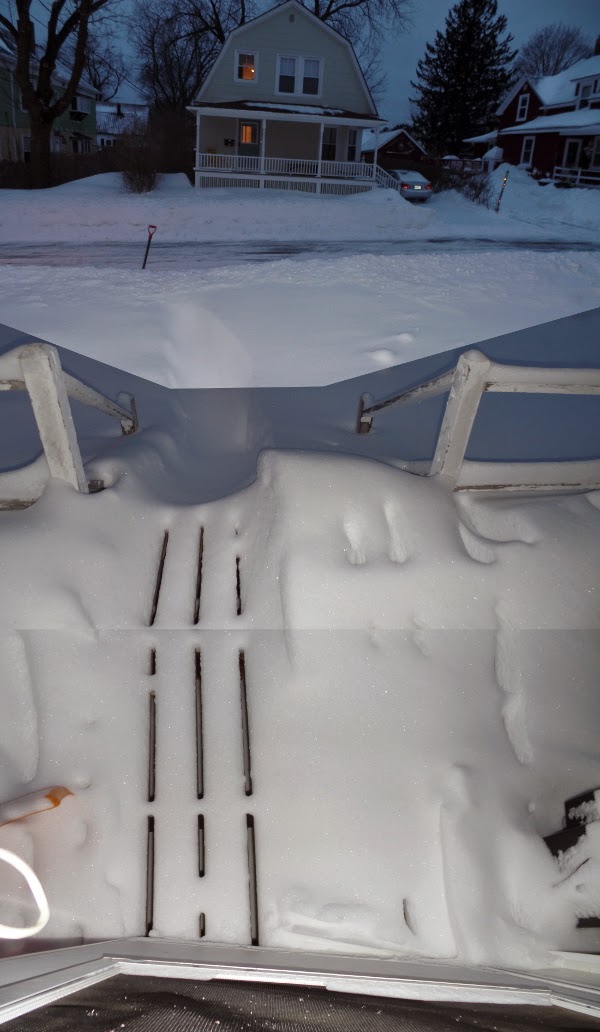 By tomorrow (night, not morning) I have to make it so that my trash and recycling bins can reach the road.  Fortunately, since no one with a car lives here anymore, I can just leave them at the end of the driveway, how hard could it possibly be to get them out? A shot looking back at my house: 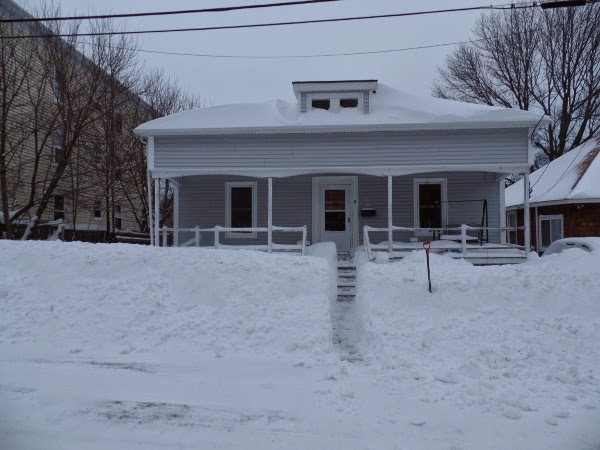 Generally the path up to the door would be twice as thick, I'd clear the side walk, and clear enough in front of the sidewalk for a car to park.  We'll see how much of that I pull off.

Also, that shovel isn't mine.  I have no idea whose it is or where it came from.  It's in deep now though.

If anyone wants to give me money for oil, it would not be unappreciated.  Right now I'm wondering if I should have held off on buying textbooks for school so that I could have put the money toward oil.

Snow is one thing, but as repeatedly noted, it's fucking cold.  The snow won't make my oil burn any faster, if anything it provides a layer of free insulation to the lower part of my house.  The fucking cold, on the other hand, that means my oil gets used faster.

But, all of that said, you (the readers collectively) have already given me more than I ever would have expected or dared to hope for.  So bear in mind that this is an image post not a begging for money post, and don't feel pressured.
Posted by chris the cynic at 9:49 AM