Spending time with people you care about, say Twu Luv and family, in a winter wonderland is a good thing.  Perhaps not often quite so much of an adventure, and even then not so much of a "Do the gods hate us, or are they saving us from much worse things?" kind of an adventure.

But first, I arrived: 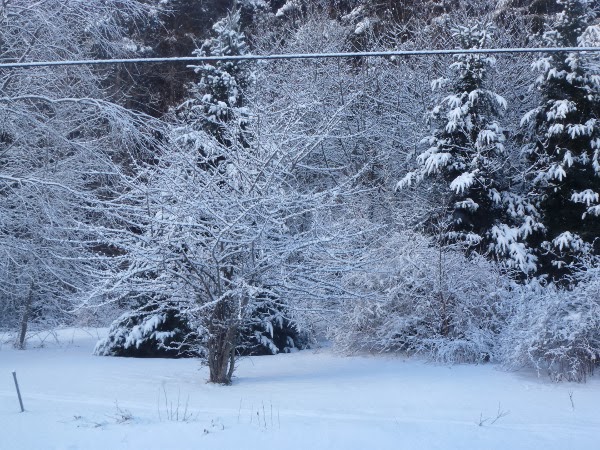 And then stuff, like my first of many (largely failed) attempts to take pictures of frost: 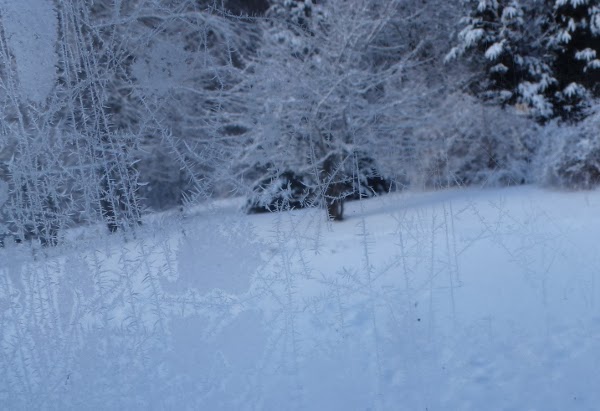 It was a cozy place: 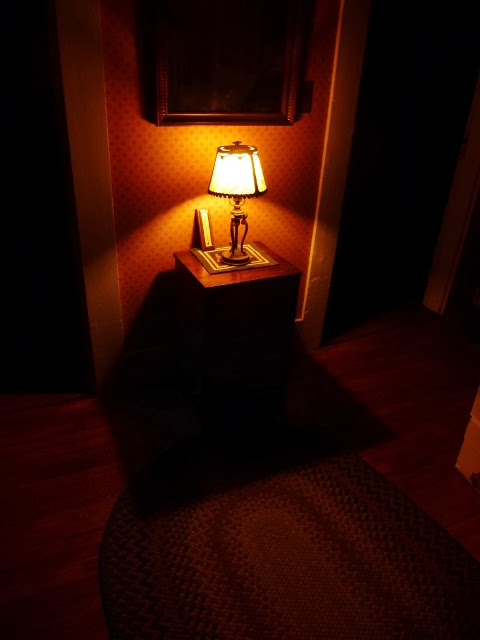 Also giant, I swear the first time I was there it felt like a TARDIS.  You'd think, "There's no way I could open this door and find a room on the other side, it must be a balcony or something," and then there would be a room WITH A DOOR LEADING TO ANOTHER ROOM across from the door you just entered.

Saw The Snow Queen (Russian film redone into English).  The shipping opportunities for Gerda and the girl with the bandits are so very, very there.

Then there was sledding.  The hill was faster than usual, I don't know how fast usual is, but this was, "Did I just break the sound barrier?" fast.  None of the sleds could steer.  There were corn stalks sticking up on part of the hill.  Did I mention you couldn't steer to avoid them?

The sleds took a beating.  Also, pretty horses.  They were across the road having fun.

Now for those who don't know rural New England, the roads are repaired every few decades/centuries and the freezing ground breaks them up something awful.

So it's not uncommon for there to be a repetitive bump sound as you go over the pieces the road has been cracked into by frost heaves past and present.

Thus it took a while to notice that the repetitive bump sound was not the road.

By that time the road wasn't large enough to pull over.  So we drove cautiously until there was such a place.  The bumping became greater, the entire passenger side of the car was noticeably bouncing into the air by the time there was space to pull over.  I can't speak to the driver's side, I wasn't on it.

Moments before we were able to pull over I happened to look out the rear view mirror (there was an impatient truck behind us) and, I believe, said, "Oh My God."  For I could see the tire.  You can't see a tire via a rear view mirror, the angles don't work that way.  But there some rather large piece of it was going round and round.

When I got out and looked at the damage I said, "You're going to want see this, but you're not going to like what you see."

I've never seen something like it.  I've never heard of anything like it on anything short of an 18 wheeler.  I didn't have my camera at the time.  Due to cold.  (Great Fracking Cold) we didn't wait with the car.  So when a party returned to the car to meet the repair guy who had been mustered* I came down with my camera.

* The wrong repair guy, it should be noted.  The truck they intended to send somehow didn't make it so they called him but he was ill equipped to deal with the problem and so it took him over an hour to do what should have been much quicker.  That he did it at all given he was ill equipped speaks well of him I think.

The tire, as it was when we stopped, just a bit more snow on it: 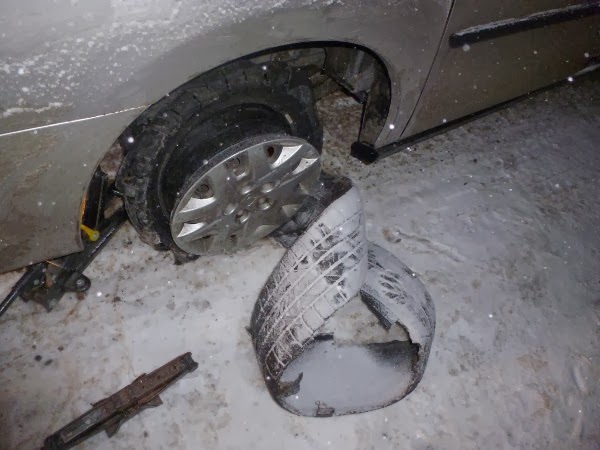 I didn't have good shoes for cold.  My feet got very very cold.  I waited in the car.  Tried to take pictures of frost, this is the only one worthy of note: 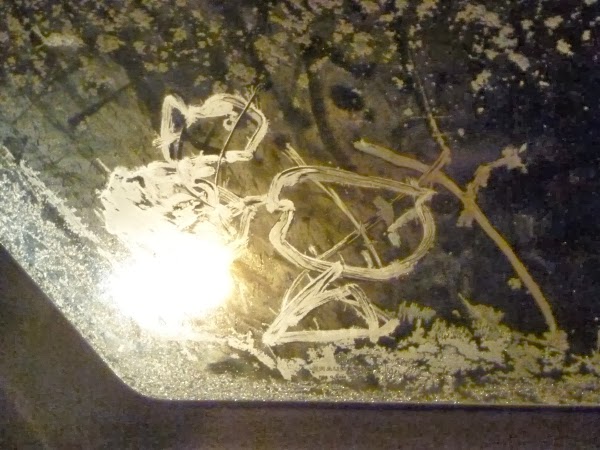 Eventually the wheel was detached and put in the back of the vehicle: 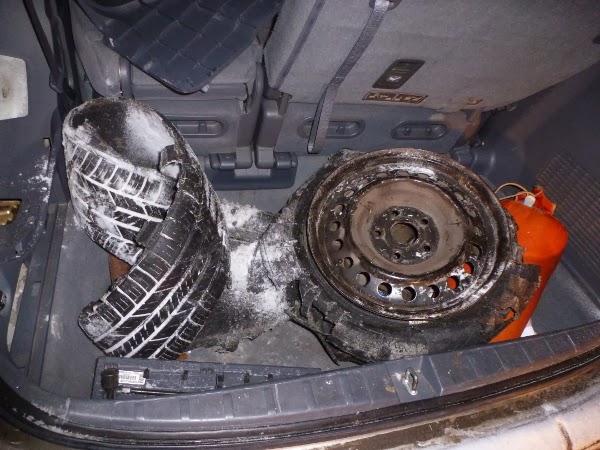 And replaced with this: 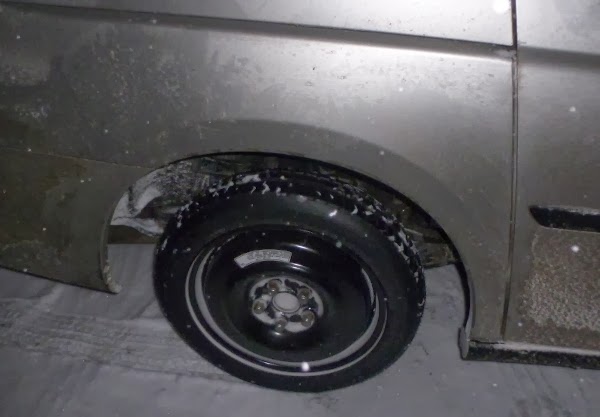 That will be important later.

But for the moment we could get back to having good times and such.  For we were back at the house: 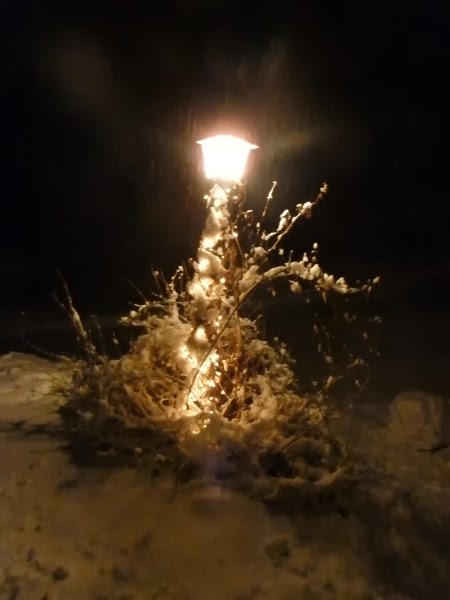 Actually, it might have been this night that we watched The Snow Queen, on account of having way less time than anticipated and it being a short movie.

Anyway, look at a rainbow: 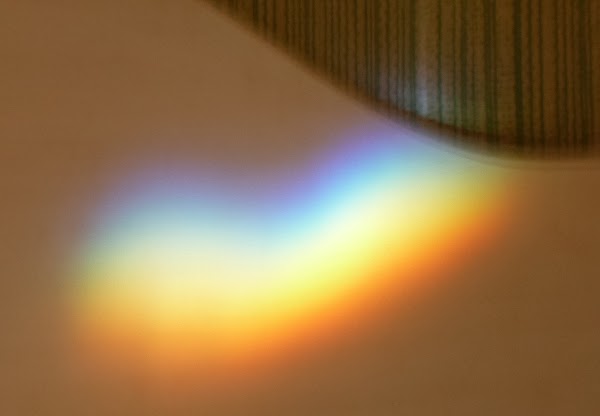 Now imagine a just turned five year old kneeling on a bed and touching it with both hands as if it were magic, because that's what I was hoping to get a picture of but she'd moved on to other things by the time I had my camera.  Of course since I'm not sharing pictures of people in this post if I'd gotten my desired picture I'd have nothing to talk about on account of there being no picture to share.

All things must end and so we headed home.  I think there's something to be said for finding beauty all over the place, hence this picture of oil in the dirty slush of a McDonald's parking lot: 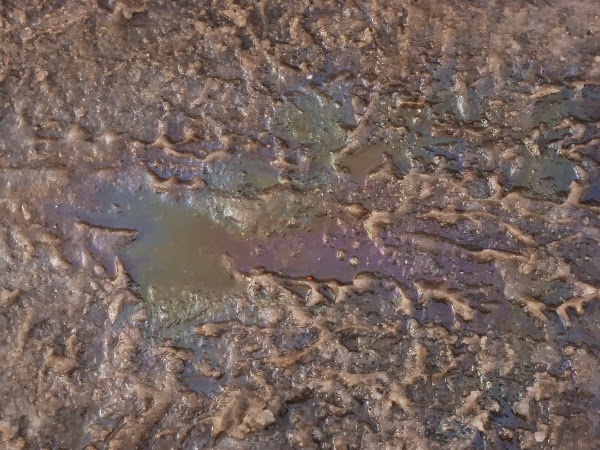 That doesn't necessarily do the colors justice so here's a computer enhanced rendering: 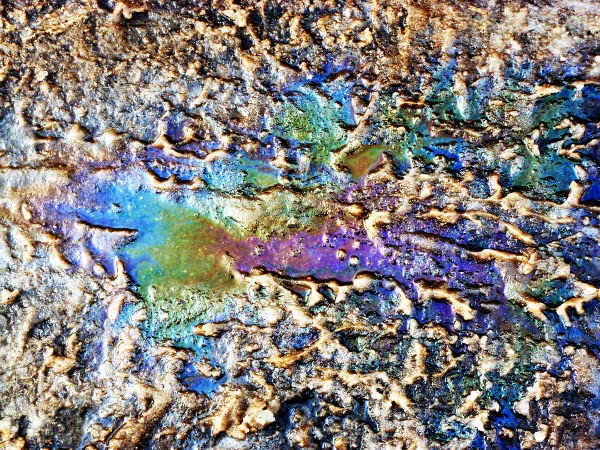 That makes the dirty slush look like some kind of gold-work, but you get the idea. 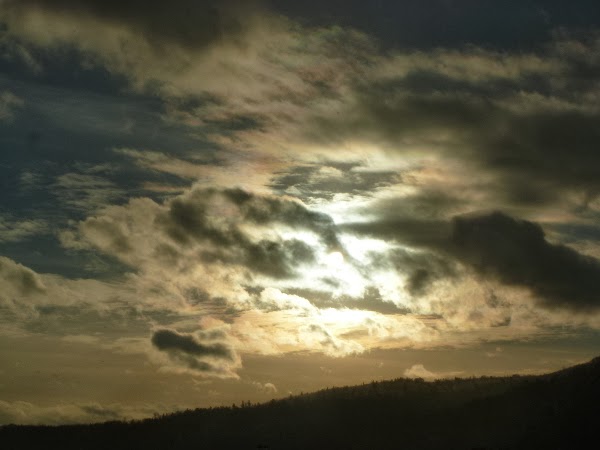 Given the need to drive slowly on the compact spare it was clear that the original plan of dropping me at home had to be abandoned and instead a new plan of taking me home with them and putting me on a bus  in the morning was formed. 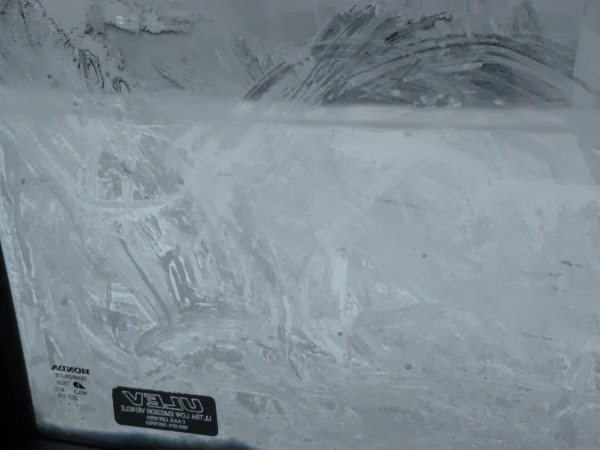 One of the first things we had done was make sure the compact spare thing had its full quota of air.

There was a repetitive bumping sound.

We pulled off to a gas station and rechecked the air.  Not enough.  We tried to put more air in.  It either wasn't taking more air or losing it as fast as we put it in.

Triple A was called.  The operator and the tow truck driver disagreed on what was possible but other than loading extra stress onto an already stressful situation I don't think it caused any problems.

Before that... well do you know what it's like trying to keep a five year old and a seven year old calm and not assholic in a gas station while you wait for the AAA guy to come?

Apparently I have the same limit as the gas station people because just as I was telling the kids to put on their coats because they had to take their energy outside a gas station employee made a similar point about their behavior being unacceptable.  Need to refine my limits so that I reach mine before other people reach theirs, then I can stop the kids before the employees feel the need to intervene.

Also, a tow truck doesn't seat four.  Needed to wait even longer after the car was on its way home for us to be on our way to freedom from gas stations.  (Luckily there were two, and the people in the one we were in after the car was towed had no idea how bad the kids had gotten in the other one.  The kids were able to be kept under control, for the most part, after the towing.)

There isn't really enough space for an adult a me in the back seat between two children's car seats, but I squeezed in somehow, and thus the long ride the rest of the way commenced.

The next morning I got on a bus.  It was snowing.


I walked home in the snow with my mind on a warm shower.  My furnace had broken down.  It was 2 degrees (F) outside when I got home which might account for the reason I didn't notice the house was only 38 degrees (again, F) when I got into it.

Fortunately the furnace was mostly fixed the same night.  Though some work is left to do on Monday.

BUT this is one of the stories where the middle is more important than the ending, or more accurately the ending hasn't come yet so how it stops being told doesn't have the narrative force of an ending.

Vermont was good.
Posted by chris the cynic at 2:19 PM