I first encountered #Gamergate via an article about Vivian James.  (This one.)

Vivian James is a fictional character created for the dual purposes of trolling everyone and providing PR cover.  The PR cover is the part that's lasted.

Full version in the link above, but the short version is this:

It came to pass that self-appointed gamers in a certain part of the internet (4chan's /v/) realized that their misogyny was showing and wanted a way to deflect that.  Thus they gave money, some 25 thousand dollars and change, to a group of self-described radical feminists to use on a project that's ... well, actually rather odd.  But trying to describe it would take too long and since the whole thing was (openly, which is the weird thing) a play for PR the stated purposes of the project matter more than the details.

The stated purposes are to increase the number of women in game design and give money to charity at the same time.

Thus the people on /v/ get to say that they're paying to treat cancer (their chosen charity is the Colon Cancer Alliance) and working to increase the number of women in game design.  (The target of their misogyny is a game developer, you see.)

They donated so much money that they got rewarded with the right to design a game character, thus Vivian James. 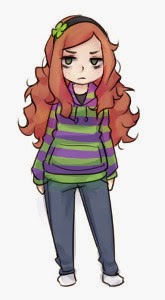 Yes, that was the short version.

Like I said, Vivian serves two functions.  One is to "troll everyone" by being ... normal.  The logic being that no one would expect 4chan to create a character that's not ... well, you know.  Thus they set out to create a normal female gamer.

The second is that she's a shield they can hide behind.  Do an image search and you'll see cartoons that demonstrate (well, think they demonstrate) that the people of /v/ cannot possibly be misogynists because look at what they're doing to support this female character.

The problems of hiding behind a fictional character to deflect responses to being an asshole to real people make up an entire series of topics that I'm not going to get into right now.

But, here's the thing.  When I look at Vivan James I can't help but feel that she can somehow break free of her origins.

Maybe it's because I'm the one who always sees things that aren't there.  I see Susan demanding to be allowed to remain in one world only instead of being ping ponged back and forth, I see her getting that demand respected.  I see Aslan deciding that, to hell with the Deep Magic, passing a death sentence on a child is wrong.  I see the characters in The Voyage of the Dawn Treader being actual heroes.  I see Jessica standing up for Bella to Edward when he pushes her around.  I see the president and his journalist friend canceling the apocalypse.  I see the cast of Left Behind acting as people who are fully equipped with empathy, compassion, and the need to help out where they can.

Maybe it's because I fought shoulder to shoulder with Snarky-Bella stopping the zombie apocalypse in 2052.*

Or maybe it's just because of the look on Vivian's face.  Take another look at her and tell me, is this the face of someone who wants to be the public face of a campaign by misogynists pretending to be feminists while claiming that, actually, it's about ethics in game journalism? 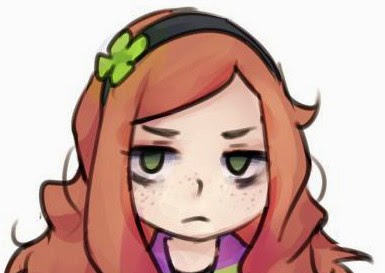 Or is it maybe--maybe--the face of someone who doesn't particularly like what she's being used for and feels like she just has to suffer through this and then maybe later, when the people putting her through this aren't looking, she'll get a chance to do something awesome.

And the look on her face isn't just in the first official shot.  /v/ has been known to get mad when people depict their daughter (yes, they do think of her that way) smiling.

She has a tendency to seem unenthused, bored, aggravated, long suffering, and even pissed off.  There's a range there--she is not mono-mooded--but it's a limited range.  Happy is not a thing she does much.  Which lends to my feeling that the character doesn't want this to be her lot in life.  She'd like something more.

She might not know what that more is, she might not think it's possible, she might not think she's capable of being more than the sock-puppet she was designed to be, but on some level I feel like she's unsatisfied with this life and would prefer to be doing something else.  Perhaps playing video games (since she's a gamer.)  Perhaps saving the world (since she's a gamer.)  Perhaps somehow transforming into a symbol of actual feminism instead of the "We're just doing this so people can't accuse us of being anti-feminist"-'feminism' she's currently a symbol of.

I don't know, but I feel like there are worlds waiting for her if she changes her story (link to a video, so if you can't sound now don't click), and I feel like she's more likely than most to do just that.

And I think we're already starting to see a meta-Vivian James shine through.  Part of the drive to convince people that, actually, it's about ethics in game journalism has been an effort to shut up people pointing to social justice issues by having women and members of unprivileged groups in general say that they're not the journalists' shield.  (Mind you the people attacked aren't journalists so ... I got nothing.)

Where is the meta-Vivian James in all this?  When a Gamergate supporter commissioned artwork with Vivian James holding up a sign saying "Not Your Shield" it seems kind of different to me since Vivian was created as a part of a project to shield the Gamergaters from criticism.  People are actually, undeniably, trying to use her as a shield.  Those people are the Gamergate supporters.

So when she holds up a "Not Your Shield" sign it feels like a rebellion against the very movement that spawned her and even the person who commissioned the picture of her doing just that.

Also, I came across this on the tubes: 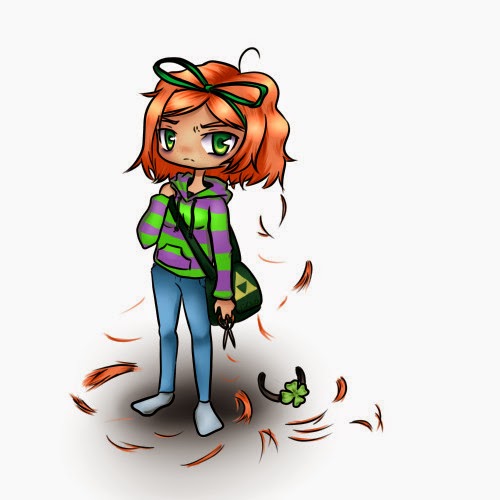 The clover she's ditched is a symbol of 4chan.  (In case you, like me, didn't know that.)

Can we stop using the damn -gate suffix?

* Well, actually Bella, Tsukasa and JC fought to stop the zombie apocalypse and I hid behind them, but what do you expect?  There were zombies.  Besides, one's a time traveler, one's a magic user (technical term: wavemaster) and one is a secret agent/action hero.  How much do you think they really needed me?
Posted by chris the cynic at 8:01 PM

Email ThisBlogThis!Share to TwitterShare to FacebookShare to Pinterest
Labels: #Gamergate, I have a blog