From the archives: Why .hack//Sign matters.

[Originally posted August 10th, 2013.]
[There are seven comments on the original which you may, or may not, want to read.]
[Packbat gets credit for bringing this post back to the front of my mind] 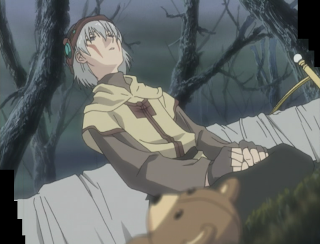 I guess it's worth talking about why I like .hack//Sign.  I started going through it, and Deus Ex, because I like these things immensely.  When I was down, when I was in a hole, they reached me.  They made me feel, they made me care.

I knew I needed more of that in my life, but I also knew that just telling myself, "Do things you like," was doomed to fail.  One of the problems of depression is that often the knowledge something will, or may, make you feel better is completely disconnected from the feeling.  You might know that, for however brief a time, X will lift you up but that doesn't help because you can't feel it.  When you can't feel it it's almost impossible to summon the emotional effort, the motivation, and the energy to actually do a thing.

And so, even when it doesn't stop you from being able to enjoy things, and a lot of the time it does, it stops you from doing the handful of things you still are capable of enjoying.

I thought running a deconstructionish thing would make me spend more time with these things that I cared about.  Obviously that didn't work.  I haven't had a Deus Ex or a .hack post up since I took over the Deconstruction Round Up at the Slacktiverse.

It doesn't explain why, for a time in my life, this was all that I had.

My mother couldn't understand my interest in the series.  I tried to explain, it's been so long I've forgotten the words but it was something like, "You know when he's on the ground and so depressed he can't move except the occasional finger?  I get that."  She didn't get that.  As far as I know she still has no understanding of my connection to the series.

You know that time when all happiness and joy was crushed, hope was but a faded memory, energy and effort were impossible to summon, motivation or even simple caring were listed firmly in the "Things it is impossible to do," column and all was clearly lost forever?  Been there, done that.

If I can get back to writing my posts we'll get there eventually.  But even so far one thing should be clear: this is a show about depression. Depression, isolation, loneliness, the way we push others away when we need them most and the way people who think they're helping make things worse, it's about anxiety and fear, it's about all the sads.  It's about my life.  And for some of my readers perhaps your life.

And it's about coming out on the other side.  It's about getting by with a little help from your friends.

I can't do that.  My depression definitely has a large chemical component, take me off the medication that works and even the most supportive, helpful, non-fuckupful people can only give me moments.  Fleeting moments of up, or emotion, or whatever, before I crash back down to normal.

But that's not what matters because Tsukasa's depression is not my depression and he was never a viewer insert character for me.  He was a fellow traveler. Someone whose problems were a lot, but not exactly, like my own.  Someone I wanted to gather up in my arms, hug, and assure it would be ok (while I prayed it wouldn't turn out I was lying.)

And someone with whom I realized that might be the wrong course of action for because, especially near the beginning (he's skittish and probably doesn't want to be touched.)  But if I were somehow there I'd work with that and do whatever I could do to help even though it wouldn't be my dream scenario.

I cared about Tsukasa and the others.  Hopefully because I'm a decent human being and decent human beings care combined with the fact that really good fiction makes the characters come alive for you so you end up caring about them the way you care about real people.  But possibly because Tsukasa was someone like me on screen.  There was a time when he couldn't summon the energy to move.  He was able to move a hand enough to grope around until he found a teddy bear.  That was it. 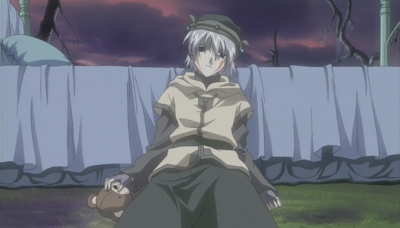 Then he flicked, with one finger, one of its eyes.  Single finger movement, beyond breathing--which I don't actually know if he did (remember the setting)--that was all he had in him so that was all he put out. Flick.  Again and again and again and again...  The same action over and over again.  Taking refuge in repetitive action.  I know that.  Rock back and forth.  Click a pen.  Rub some part of yourself.  (Please keep minds out of the gutter.)  Drag your finger back and forth across something.  (Took me way too long to realize that I was doing this with my left index finger on my inner thigh and that was why all my jeans were failing in the same strange place.)

Eventually the eye breaks off of the teddy bear.  So he switches to the other. Flick. Over and over, and over again.

Then that one breaks off.  And he goes to the finger dragging.  Like my jeans the teddy bear can't take it indefinitely, breaks open, and the motion starts pulling out the stuffing.

I FUCKING GET THIS.

If you don't get this then understand something: You're lucky.  Very lucky.

May your luck hold and may you never understand what it is to be unable to move because you can't care enough to do it.

No doubt there are many people who have never experienced depression who beat me in the "Life sucks" Olympics.  Almost all forms of bigotry leave me untouched.  I may always be on the edge of being homeless and broke, but until that day comes (and I swear it looks more likely all the time) my life style actually is pretty much middle class, give or take.  Oppressive poverty is unknown to me and that's one area where I definitely hope my luck holds.  But even if you're objectively seventy thousand times worse off than me, if you've never known depression, if you don't understand what I'm talking about, that's one area where you're lucky. It may not seem like much from your angle, but from this angle it seems like everything.

Looking at the world through shit colored glasses can make you an asshole.  The worst part of being an asshole: you're an asshole.  Beyond the obviously moral problems with that state of affairs it tends to keep people away.  Another depressed person isn't likely to brave that shit to meet you so the two of you can learn how alike you are.

Depression also tends to prevent you from reaching out. Two depressed people who share all the same interests and are in all the same places might never introduce themselves.  Probably won't even.  So even if I was surrounded by people like me I never knew they were people like me and thus never saw them as people like me.

It's for reasons like this that depressed people stories tend to involve something extraordinary drawing others in. The person is naturally isolated.  Maybe it's a van spinning across the ice rink of a parking lot at absurd speeds through a sea of faces while Edward Cullen is standing four cars down and ... why the fuck wasn't school cancelled?  Or maybe it's someone being unable to log out of a video game when that should be impossible and raises serious questions about the health of their body back in the real world.  Whatever it is something forces someone to push through the wall around the depressed person that depression has built up.  That's the fantasy.

So I'd never really seen people like me.  And then insomnia, the neighbor's loud air conditioner (or maybe something else, long boring story) booting me out of my room, and Cartoon Network introduced me to Tsukasa.  Someone like me.  Someone who wanted to be left alone in spite of being unhappy in loneliness and missing the company of the very people he drove away. Someone who shared my problems, someone who had times when he couldn't even move.  Someone with my disease.

This was a time when I watched The Shawshank Redemption untold and untellable amounts of times because I lacked the energy to get up, cross the room, and put another DVD in the player so I just kept using the remote control to restart it every time the movie ended.  Couldn't move myself, could move a finger.  Just like Tsukasa.

This was a time when I'd sit and stare off into space because I allowed a moment of freedom to enter my life and without being forced to do something I would do nothing.  Forever.  Except for small repetitive motions.  Those I would do. Just like Tsukasa.

And that's why the show matters so much to me.  It's not a show about me.  My depression is different. It's a show about someone like me.  It's a show about someone like me where hope triumphs even though it seems impossible.  Where the light at the end of the tunnel isn't a train (or a white phosphorus fire, or a death ray, or a spotlight the bandits are using so they can shoot you before you even see them, or a...)  Where hope is a good thing and no good thing ever dies.  (I told you I watched The Shawshank Redemption a lot.) 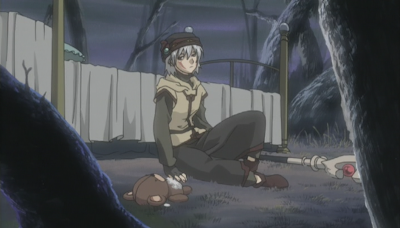 It wasn't, and I want to stress this so much, a show with a viewer insert character.  Tsukasa was himself, not an identity I could slip into to vicariously experience the fictional story.  It wasn't a show about me, or one I could pretend was about me, it was about someone LIKE me.

And that is also why it's important to have characters, not as tokens or stereotypes, exist that reflect the vast diversity of humanity.  Having a show about someone like you can make a huge difference in your life.
Posted by chris the cynic at 5:46 PM

Email ThisBlogThis!Share to TwitterShare to FacebookShare to Pinterest
Labels: .hack, Depression, I have a blog