.hack recap: Subaru and the Silver Knight just had a conversation about what should be done and what can be done regarding Tsukasa.

Silver Knight: You're being rude.
Sora: Hey.  Looks like we need to talk to little Tsukasa.  *beat*  Don't you think so?

The question is one that Subaru seems to at least entertain, if not endorse.  The beat of pause is on her and her expression is neutral.  The Silver Knight has other ideas:

Silver Knight: We eliminate all characters who violate our regulations.  There is no need to listen to their excuses.

First off: OUR regulations.  The Crimson Knights are not a police force, they are not a part of some government elected or otherwise.  They are a private paramilitary group who has taken it upon themselves to try to impose some level of order on a basically chaotic system: a game with no rules.

They're a player group like any other group of players, and they have banded together for common cause and that cause is more or less good and such, but they're no different from other citizens of The World.  They're players pushing their own agenda, not administrators handing down rules for all to follow.

Second, there's no need to listen to their excuses?  Really?  What if there excuse is, "I didn't illegally edit my character, someone else did it to me and I'm the fracking victim here"?  Because, if true, that's a pretty good excuse.

Third, eliminate?  Sora kills other characters (as with BT), the Guardian kills characters (he did it to the Silver Knight), but to eliminate someone is something beyond execution in this game.  This is a place where physical pain does not exist (except for Tsukasa) and dying just sends you to your last save point.  To eliminate someone...

And to go back to the "no need to listen to their excuses" bit, that's not setting yourself up as judge jury and executioner, that's taking the courtroom out of the equation and skipping straight to the execution.

Sora: Can you?  Can you eliminate him?

Good question Sora.  And the answer is no.  The Silver Knight can't.  He's overstepping his bounds, or at least overstating them.

Subaru: The Sys Admin has the power to do so.

This is not stated as a correction, but it is in fact a rather big one.  For Silver Knight it was, "We eliminate all characters who violate our regulations," now we're being told that it's someone else entirely who can.  No "we" no "our".  The system administrators who, just last post, we were told are having their minds boggled.

But Sora isn't concerned about that aspect of things.

Sora: That is, if he can go ahead and use those powers.
Silver Knight: What is it you want to say?
Sora: That's what I'm telling you.  You need to talk to little Tsukasa.  Let's capture him.

And now we've gone from "eliminating" the character to kidnapping the character.  Wonderful.  Except there is nothing really new about this.  To capture him they need to find him, and they can't find him.  Fortunately (for a given value of that word) Sora has a plan.

Sora: Tsukasa's not on his guard right now.  He's seen around everywhere, yet still does what he pleases.  He seems to be going around with the monster that defeated you, Sir Knight.  Maybe it's going to his head.
Subaru: Please continue.
Sora: Well first, make it harder for Tsukasa to move around.
Silver Knight: How so?
Sora: A wanted notice.  Yeah, you could put a bounty on his head and turn it into an event.

This is something that the Knights have not done.  This is something the Knights have never done.  They've been the de facto police force of The World for some time now, as far as the Silver Knight is concerned they are second only to the System Administration (the actual rulers of The World, even if for them the whole of the law is, "Do what thou wilt, but don't fuck with the code.")  They have responded to countless crimes and oddities that they have identified for themselves as well as calls for help.  In that time they have never, not once, put out a wanted notice.  They have never singled out someone for the general population to go after.

When they've felt the need to deal with someone they've done it themselves within the confines, and thus oversight, of their own organization. 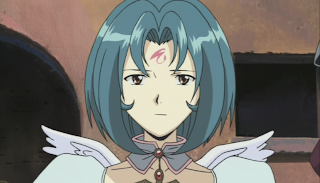 Subaru: But that's...
Sora: You don't want to do it?!
Subaru: I can't do that.
Sora: You can, you can.  Then, eyewitness reports will come flocking in which will allow you to determine his behavior pattern.  You'd then be able to come up with a strategy against him.  I'm sure you can do it.
*Subaru makes a "hmm" sound*

And then Sora talks about himself, because he's Sora.

But before we get to that, Subaru is opposed to this plan, and makes that opposition explicit, and yet eventually comes to consider it.  Subaru is not an especially pliable character, and Sora is not particularly persuasive, so this can't be viewed as like when Achilles comes on strong and then crumbles because that's what Achilles does (I'm leaving and taking my men with me.  Fine, I'll stay but I won't fight or let my men fight.  Well, ok, if the Trojans reach the ships then I'll authorize fighting.  Ok, fine, the men can fight.)  This is instead more a thing about the situation.  Subaru will elaborate on that more, albeit in the form of a statement that trails off before you can quite tell where it's going, but first Sora:

Ok, Silver Knight first.  "Letting".  He was letting Sora talk.  Because other people need his permission.  And if he doesn't like what the people have to say the sword comes out.

A lot of the characters really could be from anywhere, but the characters are all Japanese and I can't help but wonder if Silver Knight sees himself as a Samurai in the game.  Specifically from the time when it was legal for Samurai to simply behead anyone they felt was being disrespectful toward them.

Subaru: Silver Knight.  You want to talk to the wave master because of the Key of the Twilight.  Isn't that so?
Sora: Yeah
Subaru: I don't believe in its existence.

And that, right there, is Sora's motivation.  He wants to start an unprecedented system-wide manhunt for Tsukasa --using Subaru's organization-- so he can have a chat with Tsukasa about something Subaru doesn't even think exists.


Subaru: However, how he can exist in the way that he does...
Sora: You want to know.  And if you eliminate little Tsukasa, that answer will be lost forever.
Subaru: It makes me worry so.

[Previous][Index]
Posted by chris the cynic at 7:34 PM

Email ThisBlogThis!Share to TwitterShare to FacebookShare to Pinterest
Labels: .hack, I have a blog, Slow Reading