The continuing utility of paperclips.

So, my glasses have magnetic sunglasses that can be attached to them.  This is very important to me because light and I don't mix.  That song whose name I don't know but will once I look up the lyrics ("Tonight and the rest of my life") resonates with me when it says, "I prefer a sunless sky / To the glittering and stinging in my eye," because sunny days hurt.

I remember being on a cruise, and I must have been on the lower decks with indoor lighting before we made our first stop that sunny day because when I stepped out into a clear day in Jamaica I was blind and in pain and I stumbled over to the nearest street vendor where my mother bought me a pair of cheap sunglasses.

That's sunny days for me.  Without sunglasses I tend to look at the world with one eye closed because both eyes open is too much fucking light (also I think my right eye deals with the light less well or some such) and even then the open eye will be watering like [insert something that waters a lot here] and begging my brain to please, for the love of all that is holy, close.

As such, the fact that I have lost the magnetic sunglasses designed to attach to my glasses is a bit of a problem.

The solution is obvious: wear sunglasses.  But I can't just wear sunglasses alone.  My right eye, when looking at anything at a distance (it's not that bad up close) makes the world look like it was painted by a very bad impressionist.  My left eye is sub par too.  (Note to any golfers: to the rest of us "sub par" means "worse than it should be.")

Those I do have.  In four colors, but the green is missing, which is a shame because it was my favorite.  The orange and blue just don't feel right.  Orange is my favorite color, but apparently it isn't good for sunglasses.  The purple on the other hand, it worked.

These glasses can definitely fit under my normal glasses, they sit so close to the eye that my eyelashes have a habit of touching them.  So they're more or less ideal for under-glasses sunglasses.  The problem is the same as over-glasses sunglasses.  Glasses are all designed to sit on, more or less, the same part of your nose.  If you've got one pair sitting there, the other pair can't.  So it will tend to sit farther down your nose, and thus end up too low.

What is needed is a means of support beyond the normal nose-resting-on things.

Enter paperclips.  Or in this case, paperclip.

Before I went off on the bus to Boston I made a very basic expansion of the temple of the sunglasses.  Just a simple loop around it to make it wide enough to hold up my normal glasses.  It worked in theory, and for a very short time in practice, but it had nothing to hold it in place and so had a tendency to slide out of place thus resulting in my normal glasses collapsing to too low, also there wasn't much margin for error.  Consider that more a proof of concept than a prototype.

Fortunately the shortcomings had become somewhat apparent by the time I sprinted out of the house desperately hoping I wouldn't be late.  As a result I threw what remained of the paperclip and a pair of pliers into my bag.

First off, I was lucky to get on the bus because I forgot my photo ID (and was late), and thus wasn't supposed to be allowed on.  Instead the pile of cards I'd picked up included two credit cards and foodstamps.  Since I did have three cards with my name on them the rules were bent and I was allowed on.  Of course that created a lingering fear: I had bought round trip tickets.  I definitely wouldn't have ID for the trip back, so if the rules weren't bent again (they were) I didn't have ride home.

Anyway, it was difficult finding a paperclip in my backpack on the crowded bus, but I did manage it.  I discarded the proof of concept modifications and made the first glasses support: 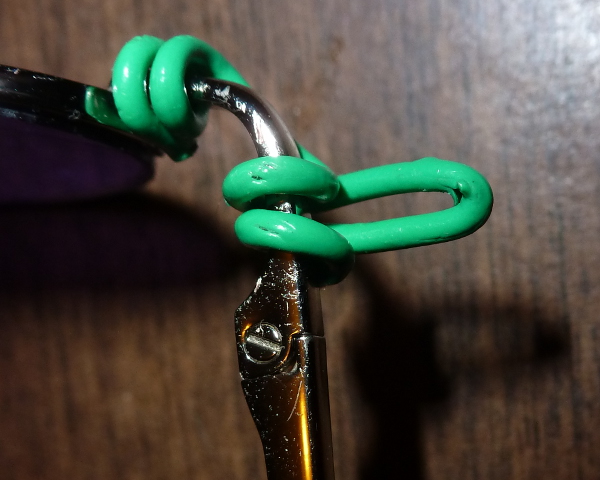 That's more or less ideal.  It's secured at two spots which are at right angles to each other so there can be no sliding, there's no sharp edges sticking out, the support comes out from under the temple so the sets of glasses will be aligned.

I wish the same could be said of the lefthand glasses support but, unfortunately, I was running out of paperclip and basically tried to make anything provided it could be done with what I had left.

The result was this: 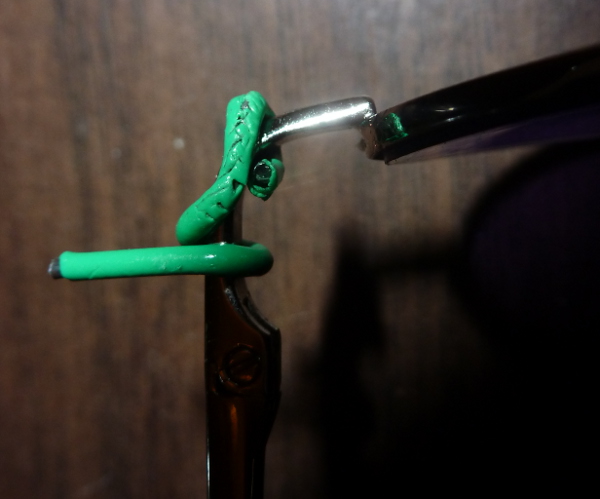 It's less aesthetically pleasing, there's less support connecting it to the glasses, there are sharp edges, and it's backwards.  Well... upside-down.  The support goes over the temple instead of under leaving the two sets of glasses to be misaligned.  If both were wrong it wouldn't be so much of a problem as they'd be uniformly misaligned  but since the right is right and the left is wrong it means the corrective glasses end up crooked.

Still, for a mark one prototype created on a crowded bus with less than a full paperclip (I'd used part of the paperclip for the proof of concept) and no elbow room, it's not that bad.

Image of the modified glasses closed:

Image of the modified glasses opened: 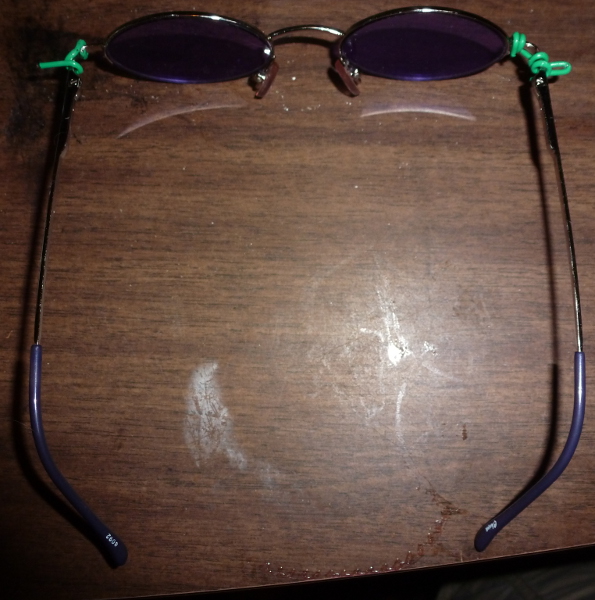 Image of how the two sets fit together: 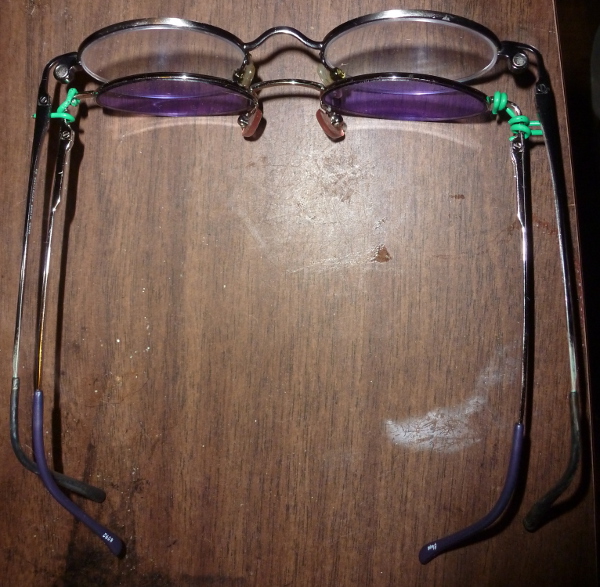 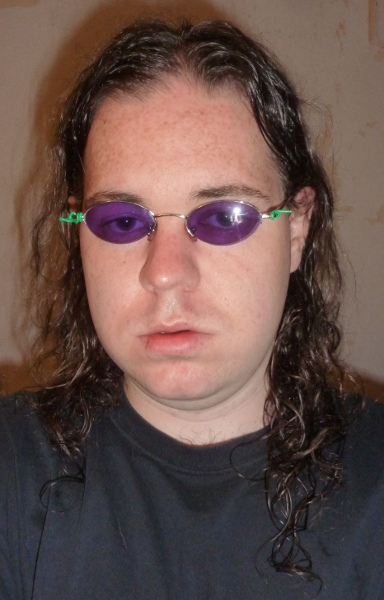 Me wearing both sets: 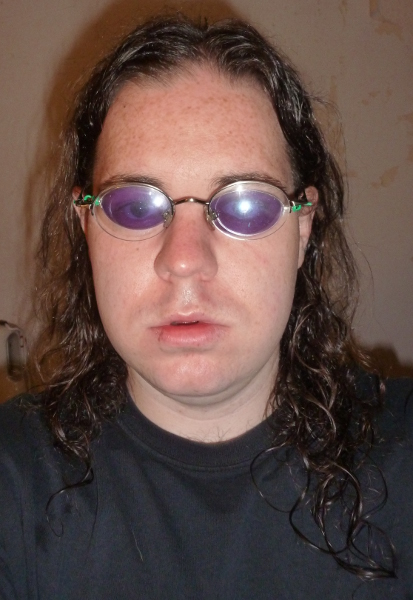 (At some point I need to learn how to smile for pictures.  It's like some secret esoteric skill that no one in the know ever shares.)

Even with the over under problem making my corrective glasses crooked they worked quite well, I was able to make the bus rides up to Boston and back fine, I was able to ride in cars fine, I was able to go to a zoo fine (the snow leopard was amazing, the bats were adorable, things were nice.)  I was not blinded by the sun.  The prototype modified sunglasses mark one are a definite success.

This post brought to you by paperclips.
Posted by chris the cynic at 11:15 AM