All description of what's being done can be found in the previous post on this topic, this is just to show you what it looks like at full size.  Full size which is, notably, kind of small.  I mean this is a famous painting so it's possible to get it in a size of 44567 x 35291 where full size for this little project was 1280 x 1014.

Regardless, the point here is to take excerpts of the images and thus not have to scale down at all and thus lose no detail.  So I'm just going to be taking the center of the picture here.  Start: 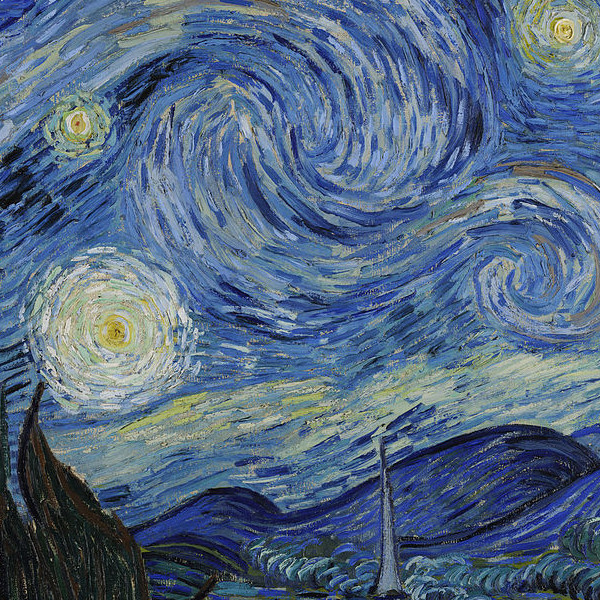 Interestingly I think the center works pretty well here even though a lot of the detail of the image is distinctly non-central, we've got the tree, a star (or three), mountains/hills, the church steeple the swirls in the sky.  It's nice. 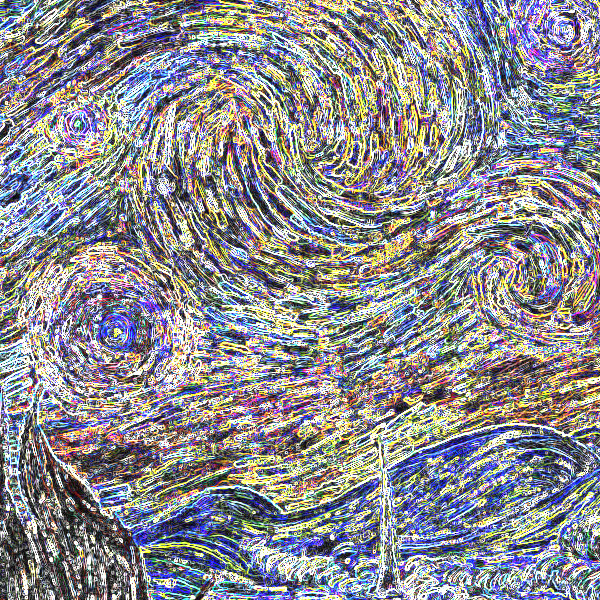 And then blurred which is way more in line with what I was doing for The Sparklegul Revisited than, say, the Mona Lisa.  Anyway: 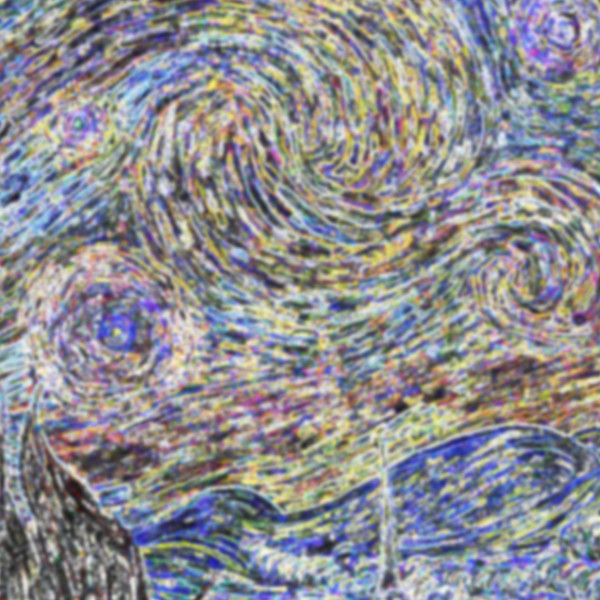 So, here's the obvious thing.  Using blurring makes things blurry.  Which is, kind of, sort of, annoying.

I find the above pretty, but it's also blurry.  It's not like there's an unblurrify button and beyond that I blurred for a reason, note the difference between this and the one above.  So the problem then becomes, "How do I take this and make it not seem so blurry?" which is exactly what was going on with the modified sparklegul and pretty much what was going on with trying to scale up a small image of the Mona Lisa sixish times without making it look like I just used cubic interpolation.  The dragon thing too.

The major difference between things like this and the sparklegul and things like the Mona Lisa and the dragon is that since this doesn't involve scaling I don't have to worry about the jaggedness/blockiness that scaling usually involves.

Anyway, one way to make a blurry thing seem less blurry is to give it a texture, the texture breaks up the blur with it's own finer details.  And an easy way to do that is with a bump map, but you need something to use as a bump map first.

So back to the beginning, edge detect is my friend: 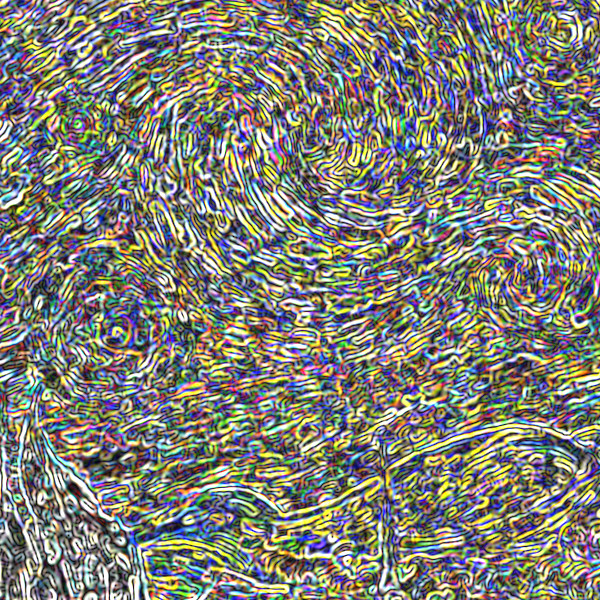 The blurring tends to result in nice smooth features here.  Which is nice as far as it goes.  Bumping with that gets us this: 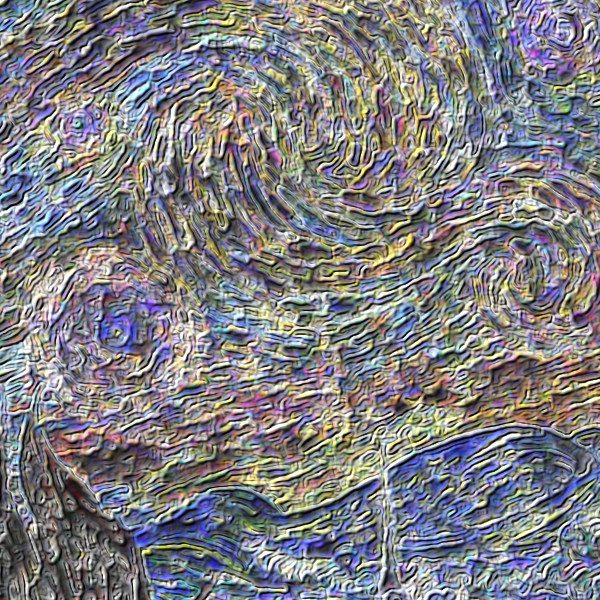 Which feels sort of oil painty to me, but that could just be me.

Going back to the edge thing and doing a different sort of edge detection twice over gets me this:


Which, while quite useless on its own, does give us a fair amount of fine detail we can hit the above image with, which, applied as a bump map to the oily thing gets this: 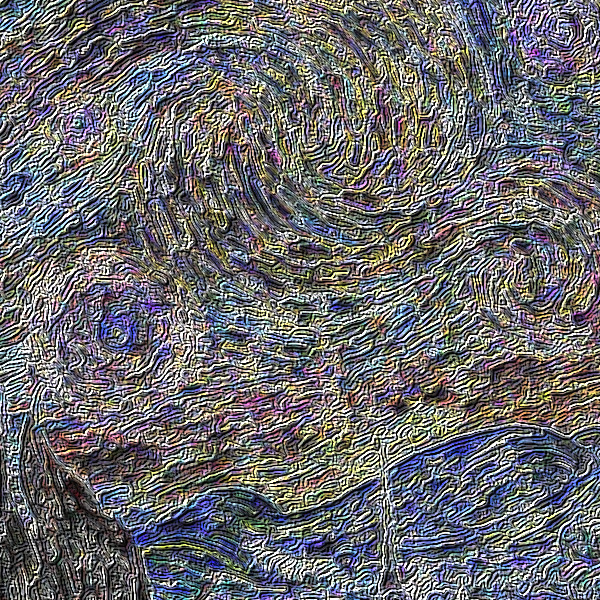 There are doubtless many aesthetic complaints one can make about this strange image, but being blurry isn't one of them.  Mission sort of accomplished.  Assuming there was a mission.

And then I messed with saturation because, why not?  So this: 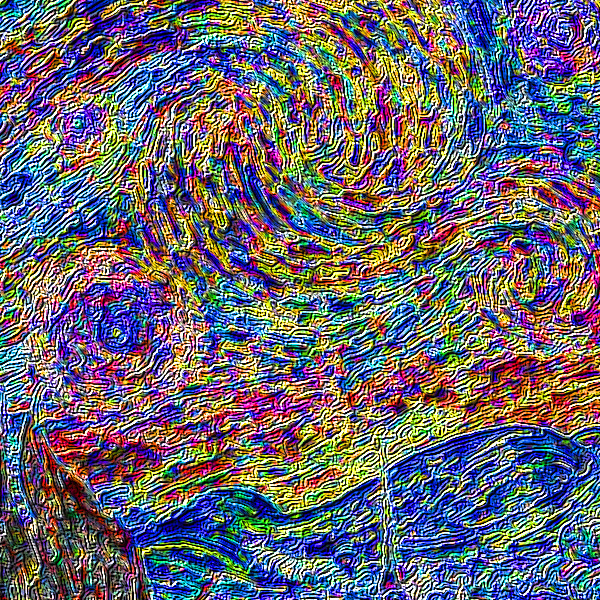 As I said, there wasn't much in the way of purpose behind that.

Ok, so that's one way to make things less blurry.  Way two is to remember that I didn't scale up here.  This is not trying to add information, this is starting with something that had a non blurriness to begin with.

These features are not entirely independent (if something is as light as can be then it's white, so colorless, so the saturation and hue collapse to being meaningless) but separating them out and then recombining them can be useful.

The lightness is very important.  It's the one we're attuned to.  Black and white images we're used to so the lightness on its own looks like a complete version of the image to us where the others just look strange. 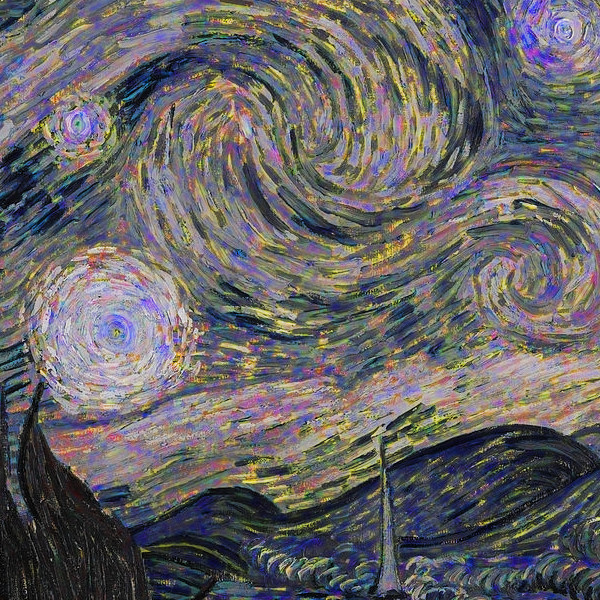 Which we can, if we want to, mess with the saturation on like I did with the other one.  It's just as pointless but sometimes bright colors are their own reward.  It makes you imagine that you're walking down the streets of a post apocalyptic town, the graffiti that covered the town in the period after police stopped patrolling and people stopped caring about whether or not you paid for that spray-paint competing for vibrancy with the plant life that moved in with the human life that got pushed out by the zombies/lack of food/alien invaders/whatever.

Why wait for time travel, zombies, or piles of lights to bring us bright colors when all I have to do is up the saturation?

At least, that's as good an explanation as any.  (Because, like I said, it's pointless): 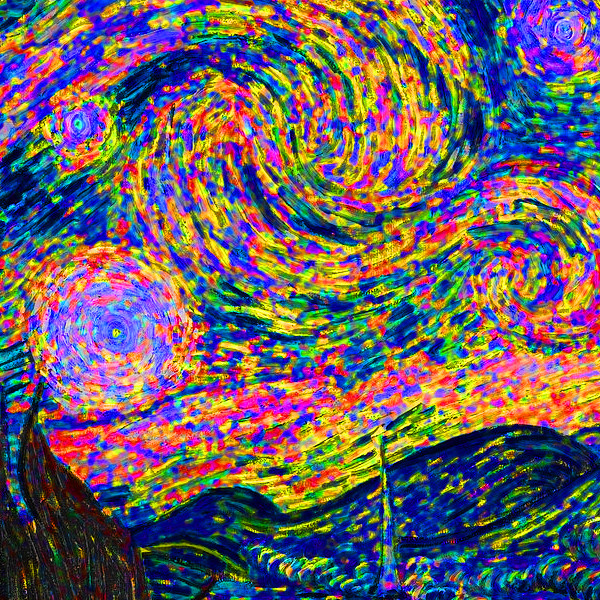 I said I wasn't going to talk this time, didn't I?  Fucked that one up.

Anyway, comparing these images to the ones from the first post will hopefully show why I thought it important to have non-scaled down versions.
Posted by chris the cynic at 5:45 PM