So, I was going to be waiting around in school for a while and re-installed Mirror's Edge * to pass the time, Ended up not using it much because I got distracted by something else, but I played it afterward and it got me thinking about difficulty settings, and graphics settings, but this will be about difficulty.

Dark Forces, if I'm remembering correctly**, had only one thing changed by changing difficulty level: The number of enemies.  Hardest difficulty and every enemy that was programmed into the game was there, easiest and there were a lot fewer.  It might, possibly, have also had the number of items changed.

Deus Ex (which I've been writing about) took a completely different route, it changed the amount of damage the player could sustain.  Getting shot in easy was not the same as getting shot in hard or realistic.

The Nameless Mod (TNM) a modification for Deus Ex, had preset difficulty levels like its parent game, but also included the option to have a custom level at which point the player was presented with four sliders:
Player health: The Deus Ex way.
Enemy health: Can't think of a game off the top of my head that does this.
Loot quantity: Not sure but I think this might be the Jedi Knight way (Jedi Knight is the sequel to Dark Forces).
Enemy quantity: The Dark Forces way.

As I recall (I haven't re-installed TNM since my hard drive was replaced) each slider had 4 settings meaning that there were 256 possible combinations.  Obviously the easiest possible is when you have the most health, your enemies have the least, you have the most items to find, and there are the fewest enemies, and the hardest possible is the opposite, but it's probably impossible to classify all of those that fall in between on a linear scale of 254 difficulty levels from least difficult to most.

Partially because even for a single person certain changes might cancel out (maybe making yourself and your enemies more durable leads to the same difficulty for you but longer battles) but also because it varies from person to person.  Someone who sneaks through the game unseen by anyone isn't going to give a damn about their health, or their enemies' health, is going to care less than most about the number of items available, but the number of enemies might make a huge difference since a larger crowd is harder to evade.  Someone who runs in shooting is going to absolutely care about their own health and that of their enemies.

I think that TNM's way is the way to go.  Simple one button settings for those who don't want to get into the weeds of things, but the option to get into those weeds and tailor the game to your desires.

Which brings us back to Mirror's Edge.  Before I say anything else, for the record, my life appears to be Mirrors Edge but I must be one of the pedestrians down on the street who misses all the interesting stuff.  As proof I offer this, which I walk by every time I go to or come from my psychiatrist: 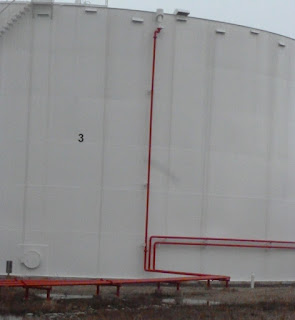 If that isn't Faith Vision, what is?

Anyway, playing it again has reminded me that being able to save is vitally important*, even if it's just so you don't have to listen to the same damn line every time you try to do the difficult part (make a save a few seconds after the checkpoint and much annoyance is saved.)

But it also had me thinking about difficulty.  My understanding is that the difficulty settings in Mirror's Edge are entirely about the combat, but the combat is one of the least important aspects in Mirrors's Edge from an enjoyment standpoint. (Even the game itself says that if you see a bunch of enemies you should run away.)

A reviewer described Mirror's Edge as a game in the closet, a racing game pretending to be a first person shooter, and when it pretends it's awkward and uncomfortable but when it, in a moment of unselfconsciousness, is just itself the wonderful game that it could be, if it only embraced its true nature with pride, shines through.

I don't agree with that entirely, if it were just a racing game I wouldn't be interested in it because I'm a plot person, and the plot does work, not as well as it should, but it works.  I think it's a running game.  Some of that can be racing, and the game practically screams out for a multiplayer where you can race your friends in real time through the urban jungle.  I can see that even though I'm not a big multiplayer person and likely wouldn't play it.  But as a running game, running should be the primary component with combat being a thing for when you've screwed up.  The parts of Mirror's Edge that work best are when you're just plain running or when you're running away.  People are shooting at you, some from a helicopter, and you're running for your life as bullets land around you.  It can leave you with caught up in the action with your pulse pounding.

As I said, when I first played after certain sequence someone said to my character, "It's ok, you can breathe now," or something like that and I let out a breath that I didn't know I'd been holding in at the same time my character did.  That was good gameplay.

But if Mirror's Edge is, as I contend, a running game rather than a fighting game, having the difficulty levels based on fighting is a mistake.

Loot quantity is impossible, there's no loot in Mirror's Edge.  Player health, and Enemy quantity matter at the margins of running, how many hits you can take as you run away, and how many armed people you're running away from are both somewhat important, but only somewhat.  Enemy health only matters if you're trying to take out the enemies, which as I've said, I feel like it should be an option of last resort.  Something like a, "I screwed up but the game ain't over yet," sort of thing.

The real gameplay is in the running, and so if you really want difficulty settings that matter they should affect the running.

Some things that come to mind:
First and foremost would be to change the way running works itself:


There's a window in which if you hit the jump key you'll be able to jump the gap in front of you (this window is determined by how fast you're moving when you jump and how far you can jump) that window could be expanded or contracted, the simplest way would be to alter how far the player can jump, there are possible problems with this (you might jump over the thing you're aiming at) but they should be fixable possible problems.  Expand the window for easier difficulty, contract it for harder difficulty.

Do something about those god damned trains.


I'm not even sure what, maybe just make them faster for harder, slower for easier.


Some things require you to punch in a bunch of buttons in sequence and if there were somehow more leeway for the game to realize "Oh, that's what you're trying to do" it would make things easier, less and it would make things harder.  That said, I'm not even sure if that's possible because the game uses buttons to do multiple things, so adding leeway might make it so that when you're just trying hit the button not as a sequence you get delayed and it fails.

Of course another option on the making it easier side would be to just use more of the keyboard.  Instead of hitting three buttons in a row you just hit one button that says, "I want to do X" and if you can do X then you will, if you can't then it'll act like you tried to do X only to have the architecture not be there.  But that's only a way to make things easier, where everything else I had a way to make things easier or harder, as the player desired.

And that may be all for now.  If I were making Mirror's Edge, and someone told me I could only have three difficulty settings, easy, normal, hard, I think what I'd do is have easy be one where you can jump farther and slide longer (possibly combined with more health for Faith and/or less for enemies) normal be as it is on current normal, and hard be one where you can jump and slide shorter distances (but still enough to make things) so that you have to time things just right (and possibly also less health for Faith and/or more health for enemies.)

Because if you've got a running game, difficulty should focus on the running.

But a better solution would be to offer easy, normal, hard,and custom, and then (like TNM) give sliders for various things if the player chose custom.  That way if someone thinks the running is too easy but the combat too difficult they can make the running harder and the combat easier.

And that's my general thought, have presets for those who don't want to take their time fiddling down in the weeds, but have the option to customize as well.  And also make sure that the difficulty, be it default presets or customizable, reflects the kind of game it is.  Otherwise it feels like it's changing how well vehicles handle in Deus Ex, a game that takes place entirely on foot.

* I've previously written about Mirror's Edge a few times.  First, the lack of manual saving led me to write:
Quicksave, Cheating, and the Sanctity of Singleplayer

And, to a lesser extent, this post involves it:
Game stories and a desire to go off the rails

** It's been a while, I should re-install it for some good old fashioned 1995 gaming.

[Mirror's Edge Index]
Posted by chris the cynic at 1:00 PM

Email ThisBlogThis!Share to TwitterShare to FacebookShare to Pinterest
Labels: games, I have a blog, Mirror's Edge