The Great Eye, and I opened another shop

Ok, so how many posts have we had related to the dragon already?

Anyway, when Ana mentioned the idea of thingy as a thingy I immediately, thought that it would have to be much bigger to be a thingy.  I looked around the internet, one place says never go under 150, CafePress compares 100 to 300 DPI and points out that the second is much more fun.  At 150 DPI the thing would have about half the dimensions of a standard piece of paper, at 300 it would be smaller still.

So I thought making it six times bigger would be somewhat appropriate.*  (Six times in each dimension.)

And as a result this has been staring at me for the past two days:

You know, it's less impressive scaled down, but otherwise I have to crop, I guess I'll crop:


Now I cannot blame this staring on Ana, I could, and probably should, have closed the instance of Windows photo viewer from which the eye still stares at me whenever my mouse should pass.  Or I could have moved to a different part of the image.  Also I should probably shut down my computer more and hibernate less, but given that every time I shut down Windows attempts to install the same three updates, and every time I start up afterward it informs me that it failed once again so now the sky is falling, I tend to hibernate rather than shut down.

Anyway, it's been looking at me, and I've been doing stuff, and I have been meaning to take some of the images I have and see if I could maybe make some kind of Stealing Commas stuff, I was thinking of maybe something like a picture of the sparkleduck (don't look for it, I still haven't gotten around to introducing it even though it came from the last memory card from the old camera) with "Stealing Commas" written above the image and, "Better than the original" written below, or something like that.

And if any of that turned out to be anything other than t-shirts, justanothershirtshop probably wasn't going to the best place to host it, so I have been considering opening a new store for people to not buy things from.  I'll never reach the full total of all of the possible ways not to make money, but why not add new ones when I can?

And CafePress then plastered that image on every bit of merchandise it could*** with no care as to whether it made sense or whether it fit.

Yes, CafePress, I went to the trouble of making an image with 20,275,200 pixels in it so you could put the damn thing on a postcard or smaller.  That's exactly why I did it.

Ok, so I'm probably at fault for clicking something or other, but at the very least you'd think it could tell that if a picture was a landscape it probably shouldn't try to make it a portrait and have massive white space above and below while cutting off the sides.  (I think I edited everything to be pointed the right way, but the previews still show it wrong.


So, I was planning to say that I opened a store that had one item in it,

Now, guess what the one thing is that still seems to be wrong?  Except maybe it's not wrong, it's confusing, let me show you:


Main page of the store, looks fine except for the fact that it's not quite the right size for the product leaving a white border on either side: 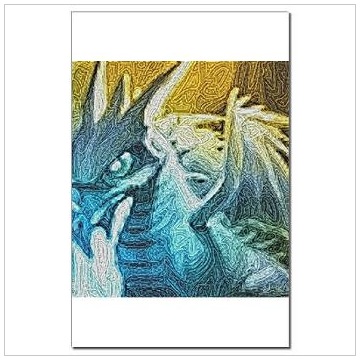 But if you click on "View Larger" on the product page it looks right: 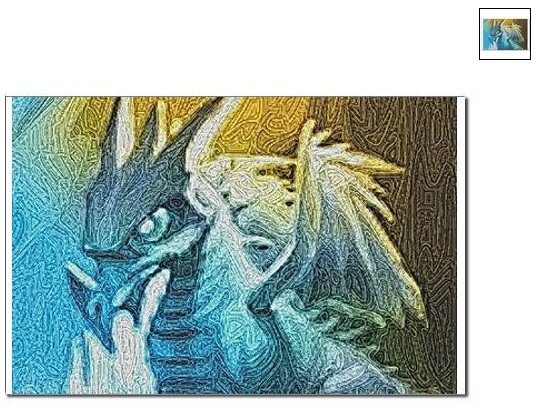 So I have no idea if it's messed up or right.  I've looked at it in three browsers, cleared history, done all sorts of stuff, and it seems screwy in all of them.  [Added] Now it appears to be right. [/Added]

So, back to what I was saying before I double checked things.  I was planning to tell you that I had opened a shop with one item in it (the one item that CafePress seems to be treating in the most screwy way), but I have apparently opened a store with 39 items in it.  Not just the 6 dollar miniature poster I intended.

Which brings me to another point.  My previous experience with CafePress left me wanting to do one thing that I never figured out how to do.  I wanted to offer images and let the prospective customers put the images on whatever they wanted.  So, in this case, rather than 39 items I'd have one image listed, and if you decided to look at that image you'd have the option to buy it on any item it would fit on.

Last time I likewise decided to start with one item and then add more as time went on, that item was Team Leah shirt.  I wanted a prospective buyer to have the option to have the Team Leah slogan on any shirt they wanted, but I couldn't find a way to just say, "Here's an image, you can put it on any shirt," so providing the option required listing 43 different types of shirt.  And after that I never really wanted to again go through the hassle of bogging down the store with 43 new products just because I had something that I wanted available on any kind of shirt.  So the store was quickly given up on and it remains listing only the original 43 items to this day.

So, anyone familiar with CafePress, is there a way that instead of listing every product on which an image can be placed you just list the image and then the customer can decide what to put it on?  At the very least it seems like there should be such an option for similar things (i.e. one listing for all shirts with the image, one listing for all posters with the image, so on.)  But while it seems such a thing should exist, I could never figure it out.

Anyway, that dragon, now significantly larger, is the only thing over there now.  In the future I think I want to add the sparklefowl (both of them) and the defiled Mona Lisa at the very least.  Possibly other stuff.  And, if all goes to plan, there will be all kinds of things that... people... will... not buy.  I really have no illusions about getting rich by opening an internet store.

* That was actually rather smaller and more attainable than something else I'd been doing to the same image earlier, and thus a much simpler thing to work on.

** I did not actually speak to the eye.

*** Massive exaggeration on my part.
Posted by chris the cynic at 8:17 PM

Email ThisBlogThis!Share to TwitterShare to FacebookShare to Pinterest
Labels: I have a blog, meta, pictures