The city of Portland has decided to hold the fireworks show Thursday night because of heavy storms.

But I had some fireworks.  I wanted to get some pictures up, but getting the right stills from the video I took is proving to be more annoying than it should be, and tomorrow I'd probably be spending my life as a member of my family's slave, so who knows when that'll happen.


The text version is this:


First there was nothing much, the occasional flash from an indeterminate direction.  Later there was sound and fury.  Thunder, rain and wind.  The wind drove pulses of the rain down the street that was now a river, the thunder seemed to come from all around, and this went on for time without end.   Until, you know, it ended.


Then there was nothing, unremarkable calm.  It was at this point that I learned the fireworks had ended.


Then at some point I went outside and looked down the road.  At first the sky seemed a single shade of gray.  Then part of it lit up, then another part, then another, and another.


I don't think I can add too many more "another"s because only so many clouds actually did the lighting up, but there were varying brightnesses and timings and whatnots.


It's actually still going on, tried to go out and get something now, but it's too dark for the camera,  Which is too bad because it's, if anything, more impressive now.  I'll be missing it because I need sleep.

I did get some still shots though, I told the camera the sky was stary and it took a 15 second exposure.

I switched into thingy mode and turn whatchamacallit (I know nothing of cameras) up to 1600 which makes the evening sky look like midday and kept on snapping pictures until one of them caught something: 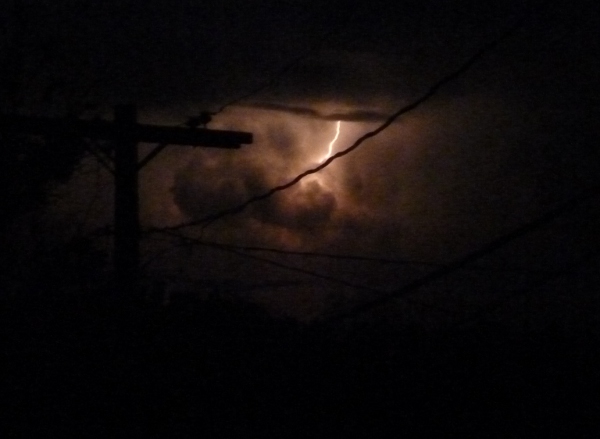 But the point was never about the bolts themselves, most of the time you couldn't see them (though there were some impressive cases when you could) nor was it about what an average of the sky looked like over 15 seconds.

It was a very good thunderstorm, is what I'm saying.
Posted by chris the cynic at 10:36 PM