My mother was a third generation Mainer (pronounced Maine-AH regardless of whether you actually have the accent or not) I think.  My father's family had lived here so long that they'd not just lost track, but lost track of losing track.

So it makes it a bit strange that my sister and I were born in the capital of New York.  After I was born my mother wanted to move back home.  There was no question about where "home" was since my mother's parents and my father's (or at least his dad) lived in the exact same area.  We ended up, though the house being about the right price and about the right shape and about the right ... and so forth rather than design, right between the two.  My grandfather Robert father of Robert lived in Portland, my grandfather Robert father of Joanne lived in Cape Elizabeth, and my family settled in South Portland, a city that happens to boarder both Portland and Cape Elizabeth.

We never had baby sitters or any such things.  I don't recall any after school programs they unloaded us into.  And as for the weekends or, heaven forfend, summers. . . I grew up as much on my grandparents farm in Cape Elizabeth as I did at my house in South Portland.  Not that my mom's family was the only one to help.  One of my father's sister and her . . . whatever the fuck you call an unofficial wife before anyone's even considered civil unions, much less marriage equality, also put a lot of work in.

But I grew up at the farm and my own house.

Our grandparents never worked us, we had free rein and in addition to exploring the woods, gorging ourselves on strawberries we never had to pay for (beyond picking them ourselves), and pretending the eave-spaces upstairs were exciting secret passages, I have memories of being a little asshole.

So my "I grew up on a farm" cred does not include, "And thus I am tough and no stranger to hard work."

And yet days like today, when I find myself caked in dirt, drenched in sweat, and with blood flowing out of one part of me or other because the fucking tool fucking slipped, feel pretty normal to me.

Having my hands in the dirt is probably something I know from helping my mother with the flower garden at our house, not the farm.  Doing work passed the point of exhaustion is just something that happened along the way.  I can't even come up with a plausible start.

As for the blood, that sucks, but it's a natural part of the "blood, sweat, and tears" combo.  (We can talk about tears later.)

I've never been a stranger to blood.  When I was learning right and left I already had a distinctive scar (which is still there) on my right thumb that was created in a truly bloody misadventure.  If you've never seen/experienced it, you'd be surprised how much blood can come from a thumb.  So the blood part is as ingrained in me as knowing my right hand from my left.  More, really.  I knew blood first.

Come to think of it, that could be why I so hate having blood taken out of me.  Getting it to stay in me is fucking work and I have been working on that project (hard but with many failings) my whole life.

Tears are more rare, but if the sweat reaches the eyes there's no telling what will happen.  Granted it will be painful, but beyond that it's really wide open.

The point of exhaustion didn't used to come so quickly -- I know what size I generally do best at and it and I parted ways about a hundred pounds or so-- and my body didn't used to protest so much or so frequently, but . . .

At some point I looked down at my hand saw it was covered in dirt, noted the over-sized band aid (there were none of the right size) trying to keep my middle finger sanguine, felt the bone deep fatigue throughout my body, and it all felt . . . familiar.  Like I was deeply immersed in being me.

It should be noted that none of this is to say that I like working for my sister.  I volunteered for four hours today.  She had control over transportation, pretty sure it was more like six or eight.

Apparently my grandparents had to spell out their last name frequently.  I don't remember it, but it stuck with my sister.  Not that they had to say S-Y-S-K-A a lot, but rather the sound of those letters being spelled out.

When she revived the farm she named it after that sound.  "Eswhy Eskay A" farm.  Of course since "a" is an article that one might use with "farm" it can also be read as "Eswhy Eskay, a farm." 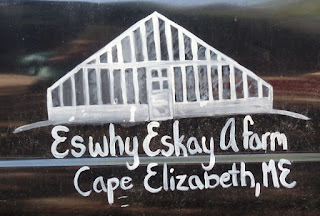 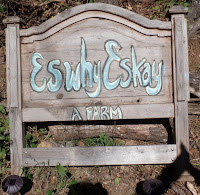 You can actually see a bit of my reflection on the side of the truck that logo's painted on.  The logo is an artist's rendition of the greenhouse, now in disrepair but hopefully restored one day.

For my grandfather the farm was a place for strawberries, flowers, and food for the family (the blueberries and rhubarb come to mind, but there was also corn and squash and stuff.)  My sister has been reinventing it as a farm with animals.

No cows at the moment, haven't checked on the ducks or lack there of, but there's still sheep, geese, chickens, and animals that are more willing to be photographed: 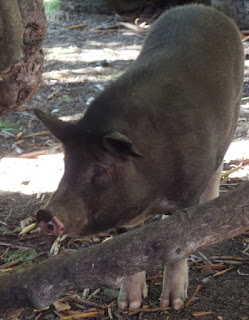 The pigs tend to keep their distance, the goat pictured here is pretty nice when she's not trying to eat my hair or shirt.

The big task for the day was putting together a trailer.  These were the primary tools: 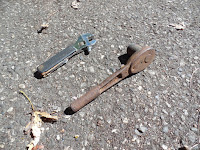 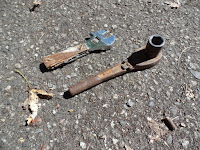 A rusty ratchet and a tiny beat up wrench that responds about as well to tools slipping as I do (the second side had a covering until one such slip.)

It started completely disassembled, I think this is how far I got before the others were done with enough of their stuff for it to become a group effort: 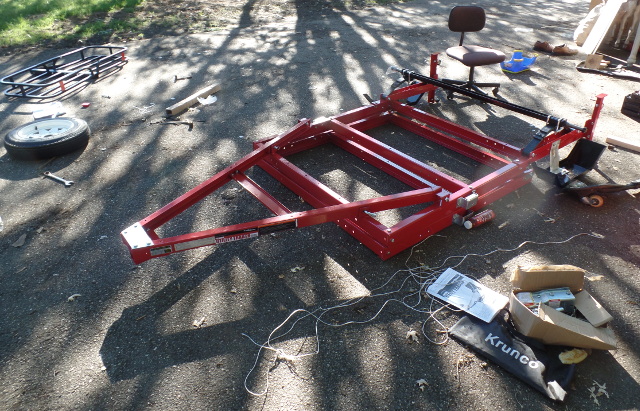 How did I end up covered in dirt doing such a clean task?  I'll never tell.  Unless I do.  But I probably won't.

Here's a picture of the others after it became a team effort, note that the frame has been unfolded, turned right side up, and such: 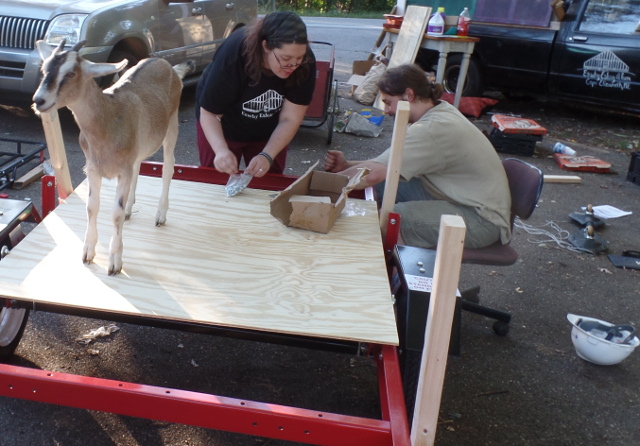 No, the goat is not helping.  Like most goats, she is simply there.  Goats are sort of like cats.  They go where they want, when they want, unless you're willing to pitch a fit to get them not to.  Even then, training simply gets them to flee when caught in the act of doing something bad, rather than preventing them from doing the bad thing in the first place.

The last time I was at the farm a large portion of what I did involved helping set up a fence.  A big part of what my sister is trying to do with the image of the farm is a colorful place of creative reuse, thus the fence where every other picket is a discarded ski gotten at the dump makes sense: 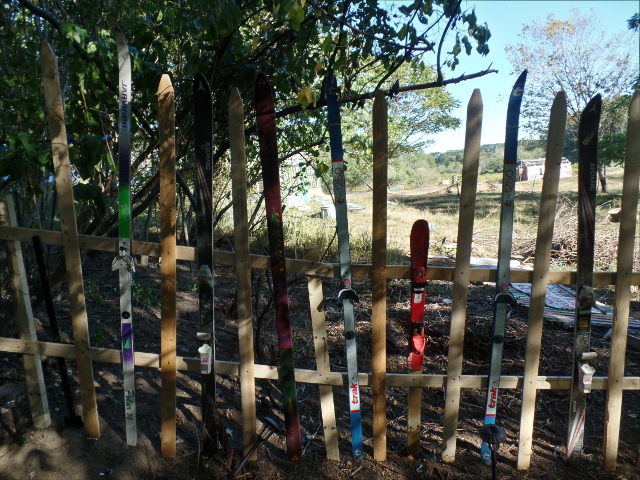 I wish I'd been able to get a picture of what the door looked like before they managed to get it out of the doorway.  You know, in its freshly kicked down state.  I didn't have my camera then, and it's not like they were going to leave it so that when you squeezed through the screws might scrape your back.

Have some pictures of the cleaned up sanitized version: 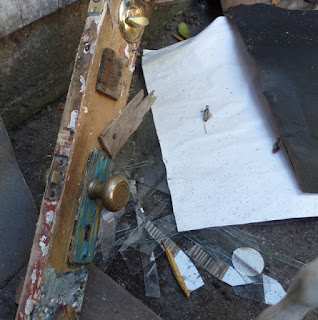 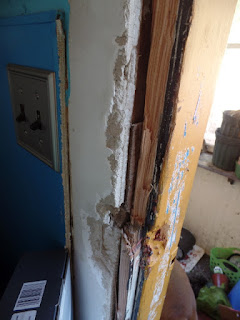 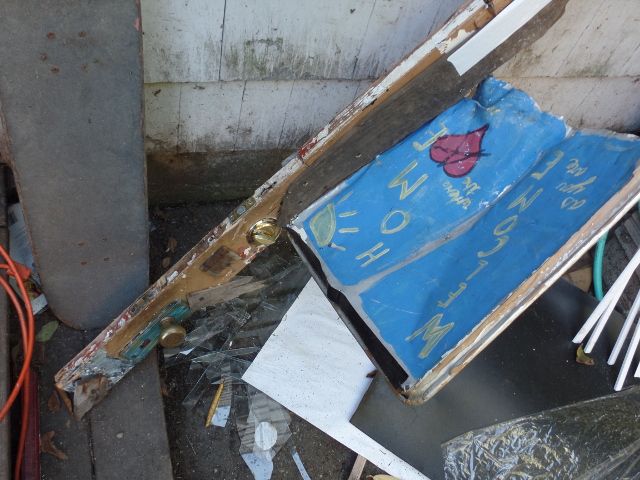