Another computer update and since when do crows chirp?

I started the day on a mission.  I was going to get to the store and get the shit with my computer sorted out.

How far away is nearest place to by food?  An hour on foot.  Longer coming back because when laden with food progress is slowed.

I arrived just as the opened the doors.  Except it wasn't a door it was more of a clear foldy thing that... actually, let me go back a bit. 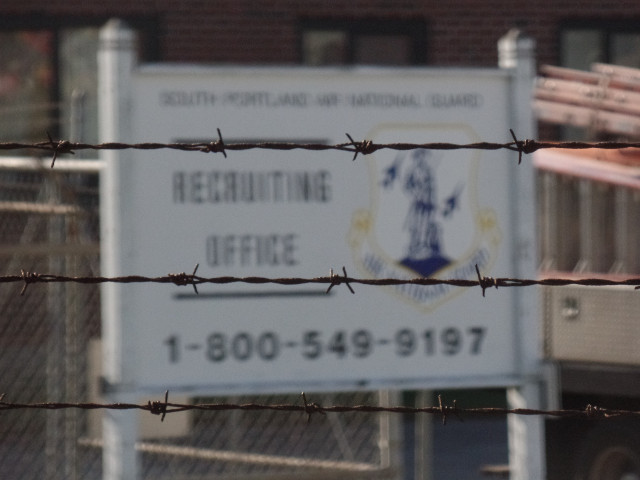 One of the reasons that secondary computer is secondary, one of many reasons, is that the touchpad mouse can be a bit ... squishy.  Trying to accomplish something isn't so much clicking in a place as it is creating a probability function that a click will occur over the domain of all of the places in the general vicinity.

Which means that the above image became my desktop quite by accident while I was just trying to get the damned thing into a program where I could scale it.

Now, onto the actual image:

If you don't speak barbed wire, here's more or less the same picture with the focus adjusted some: 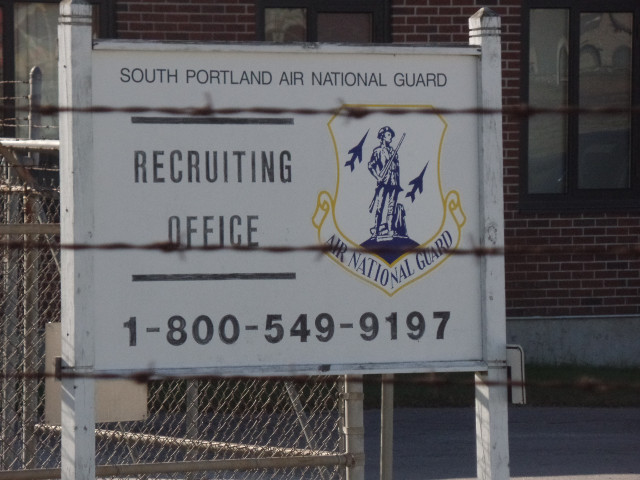 So, you know, if you want to join the South Portland, Maine Air National Guard, do be sure to call that number.  If, however, you're trying to think of the best way to feel welcoming and inviting so that you might recruit people, I don't think surrounding your "Recruiting Office" compound with barbed wire topped fence is ideal.

The army, as I recall, has their recruiting office across town near the post office, city hall, a pizza place, and a supermarket.  It has no fence.  It's just in a building like any other.

So go passed there, walk a lot more, hit the mall.  It's on the other side of the mall, thus I must walk through the mall.

At this point the mall is on the verge of being open for business.  Right now its' open for "wait inside until the businesses open."

Not a lot of people doing that.  Apparently there's no great rush to be the first person in the Victoria's Secret.  But then, what's this?

A veritable herd of people.

It is, of course, the Apple store.

There are some cultural boundaries that can't be crossed in this life.

But what I don't understand is why you'd want to partake in something that makes you one of those people on the outside while these people:

(Random consumer who is blocking my shot has been replaced with digitial oil painting to protect his identity from angry mobs who might want to do bad things to him on account of him blocking my shot.)

Picking up where we left off:

while these people stand as far away from you as it is possible to stand while still remaining in sight so that they can have the smug satisfaction of knowing that they're in while you're out and, further, put on a nicely orchestrated show of how much they're ignoring you.  A show only broken by the occasional condescending glance thrown in your direction to make sure that you're appropriately aware of your low station in life and the fact that, while most would say that they are here to serve you, you and they both know that they are above you.

They are the priesthood, you are the laity.

(No wonder random consumer who is blocking my shot can't stand to look in their direction, but he still stands there, just as they want him to.)

Anyway, walked passed that and eventually came to my destination.

I thought they were late in opening the door, but on further examination I think my watch is now closer to three minutes fast than two minutes fast.  That'll take a while to get used to, but it's not like it'll throw me off nearly as much as resetting my watch to the correct time would.

Anyway, I was first in line at tech support.  I think if I hadn't gotten stuck with Asshole behind the desk when I first brought my computer all of this could have been done a week ago.  Not totally sure though.

Anyway, got store credit, which I had to use online because the proliferation of laptop subcategories means that they only seem to have space in the store for about three of whatever your're looking for.  Contrary to what Goldilocks may think, if you only have three choices out of the entire universe of choices then odds are you won't find "Just right."

So now I've ordered a computer.  Of course new computer means I need to buy a new warranty.  It is, therefore, not completely covered by the credit I got from having the old computer die.

Also it seems that even as some things improve others get worse.  The new computer will not have a disk drive, forcing me to supplement it with an external disk drive.  Nine months and change ago when I got the computer being replaced I wasn't able to get one that was able to play blu ray, but the DVD/CD drive was still there.

On the other hand the new computer will have a much better monitor, even if it is about two diagonal inches smaller.

UHD (Ultra High Definition) is something that there is almost no call for unless you're usually near a place to plug in and you do a lot with photos.

In theory you'd think a laptop in UHD would be ideal because the distance from eye to laptop, and the general size of a laptop screen, makes UHD resolution within the margin of error of perfect.  Sure, we can keep adding pixels forever, but there comes a point where the human eye can't see the difference anymore.  The resolution of a UHD laptop screen at standard laptop distance seems to reach that point, or thereabouts, and thus is as good as we can get using our human eyes.

In theory everyone would want UHD on their laptop.

In practice most games don't run in UHD, even the few shows that are made in UHD don't tend to stream it and even on the rare occasions that they do, your internet connection isn't going to let you stream it well.  With all that lack of benefit comes a cost: UHD monitors take more power.  You'll burn through your charge faster than if you'd settled for ordinary high definition.

At this point in time UHD is useful only for people who take a lot of pictures with a digital camera, want to look at them in high detail without being limited to seeing only a part of the picture, and are likely to have a place to plug in in most places they go.

Improvement in some areas, steps back in others.

Other than the better screen and need for an external disk drive there's not going to be too much change worthy of note.

The computer is being shipped with an estimated delivery date of, "Crap, I just went away on a trip."

So that's sub-optimal,  (Though it is always possible it might arrive before estimated delivery date.)

Once I have a primary computer again I can go back to panicking about bills.  At the start of the walk this morning the cold made me think of the oncoming time when I need to be able to refill heating oil in order to stay alive.  Then again, it didn't take long before it warmed up to the point of, "What the fuck was I thinking, wearing a hoodie on a day like this?"

Could have sworn it was "creeps forth" but apparently no.

So, the point is that a week and a day ago I felt like all hope had drained from the world because Asshole behind the desk said that my computer wouldn't be repaired (true) or replaced (dirty fucking lie) and now I have replacement computer coming.

I have lived in this timeline on this planet for thirty years, two months, and three days.  At the absolute most, five weeks of that time (non-consecutive) has been spent away from the crow filled areas of the world.

You know that I live in a place where crows roost in winter.  How else could we have crows without end?

In that time I have only heard crows make one noise.  Until today.  Until I was walking home from getting the store credit with which to replace primary computer today.  This morning.

First the noise I know.  A caw.  Caw goes the crow.  That's what crows do.

Four chirps, almost clicks, in rapid succession.  How rapid?  I'm not totally sure it really was four and not, say, three or five.

Look around.  What made this noise?  Only thing in the right direction: single crow.  It does it again.

Four chirps, almost clicks, in rapid succession.  How rapid?  I'm not totally sure it really was four and not, say, three or five.

When I'm looking at it this time.

Since when do crows make this noise?
Posted by chris the cynic at 10:57 PM