Fred Clark of Slacktivist once commented that he would like a T-shirt with, "Then I shall be a wicked Child, and the great God will be very angry with me," from Isaac Watts’ First Catechism (1730).

The exact quote is:


I absolutely want that answer on a T-shirt.

Also business cards but I can't much help with those since they tend to be personalized.

The reason is that, while not intended to be such, it's very much like what Fred Clark considers to be "the greatest scene of salvation and redemption in literature":

Now it wasn't spesified how this statement was wanted on a T-shirt.  For whatever reason I prefer shorter lines that allow for bigger writing, so I'd break it up into four lines: "Then I shall be / a wicked Child, / and the great God will / be very angry with me." but that plays havoc with the integrity of the clauses.

A more reasonable approach is to put it in two lines.  One would like to separate the two lines at the comma, but the size of the clauses makes it better to break after the "and" 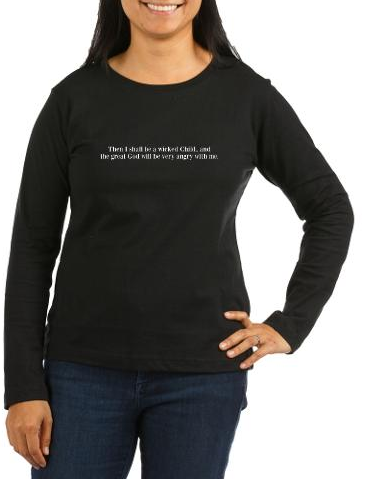 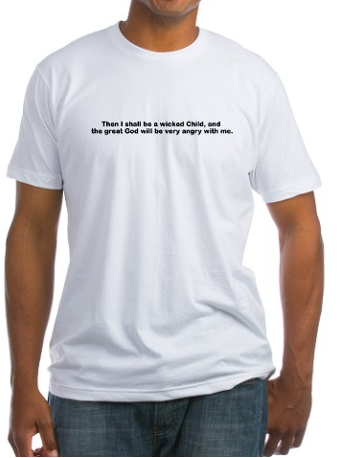 You can see how reducing the number of lines makes the writing small and such.

The reason that those sections say "Latin Alphabet" is that I wanted to do it in Sherman's Gallifreyan as well, but it looks like I'm going to have to go through a process were I convince the people at Cafe Press that, seeing as how it belongs to Sherman, and Sherman has given people to use it as they see fit, the BBC will not in fact sue them if they let me make T-shirts with Sherman's Gallifreyan on them.  Maybe if I drop the word "Gallifreyan" and point out that it was originally developed as a way to write English that was not linked to any intellectual property...

Anyway, T-shirts.  T-shirts that it is likely no one will buy.
Posted by chris the cynic at 12:01 PM

Email ThisBlogThis!Share to TwitterShare to FacebookShare to Pinterest
Labels: I have a blog, shop