So, some time ago, my mother, my sister, and I all went to Six Flags New England.

It may be worth stopping for a moment to ponder that name.  The "Six Flags" refers to "Six Flags over Texas" a phrase referring to the six different flag nations who have subordinated Texans to their will (most regions are content to have only one or two.)  By "flag nations" I mean in the Eddie Izzard sense: "We sole countries with the cunning use of flags."

The first county to come by and stick a flag in, backed up by guns and swords more durable than the local wooden swords,* was Spain.  Then France.  Then Mexico.  Then Texas became a country.  For those saying, "They totally copied Vermont," yes.  Yes, they did.  Except rather than help the USA gain independence and begin to exist they used a border dispute as a means to catapult us into a giant land grabbing war.  It was very simple actually, but I'm getting ahead of myself.

Texas never intended to be a country for long and so they join the USA.  For those counting this is flag number five.

Now on to the border dispute.  The two sides claimed different borders.  Unlike the thing with Canada, we didn't just split the difference and have both sides walk away from the compromise with less than they wanted but satisfied that it was at least fair, we dealt with this a different way.  We sent troops into the disputed area.  The area that Mexicans thought was Mexico and Texans assured us was the USA and when those troops were naturally shot for being, you know, an invading army, President Polk used it as cause for war ("Mexico has passed the boundary of the United States, has invaded our territory and shed American blood upon American soil.")

But anyway, back to the flags.  We've got Texas included in the United States of America, where it is today, and only five flags.  What's flag six?  What's the final crowning flag in "Six Flags"?

The Confederate States of America, of course.

Now look back at that name, "Six Flags New England".  How the fuck did the Confederates get into New England?  We have seriously let our guard down if they're claiming territory this far north.

Ok, quirks of naming aside, we went there, had a good time, and randomly had someone take our picture.  Ever since then I've been getting emails offering me prints.  I once bought a nice frame-able one for my mother thinking that she might like a reminder of the three of us getting along, she said she'd get back to it and had me keep it in the meantime, it is now lost in my room, how hard it would be to find I do not know.  I have not tried.  If I knew where my camera was or if I had a working scanner I might have tried, but as it is I just worked with the sample picture they sent me which is this, touched up a bit to remove the marking that it is a sample and in the process (I didn't notice this until I did 20,000 things with it) accidentally removing a section of my sister's arm. I honestly don't know why they feel the need to mark up the picture, for one thing, that's original size.  Not a lot you can do with an image that small, for another I don't think they offer it in digital form anyway, so to get what they're attempting to prevent me from getting I would need to order a print, scan it in, downscale it to tiny, and then at last have the forbidden fruit.

And damn is that missing section of my sister's arm noticeable now.  I was just looking at other parts of the picture at the time.  You know me, I made it eight times bigger and made lines, which I'll scale down for inclusion here.  I tried a different style, leaving the thicker original lines intact and just filling in the empty space with small lines: 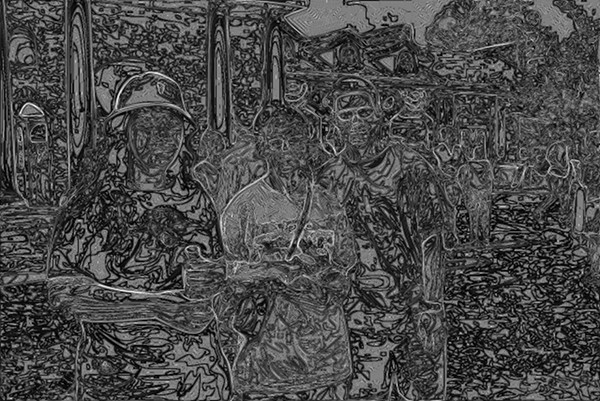 At full scale it looks like this (my sister's face): 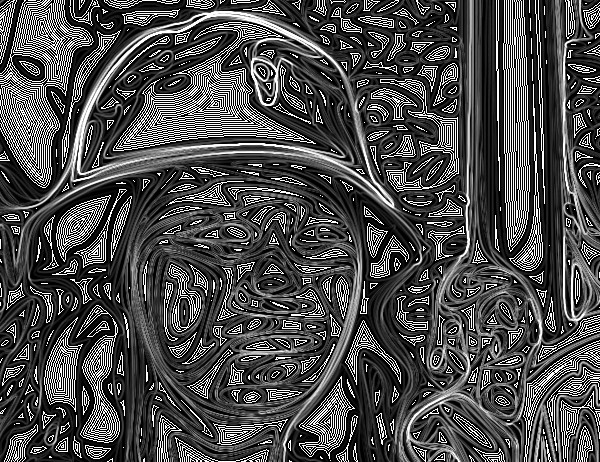 As it turns out that style doesn't really give me results I particularly liked: 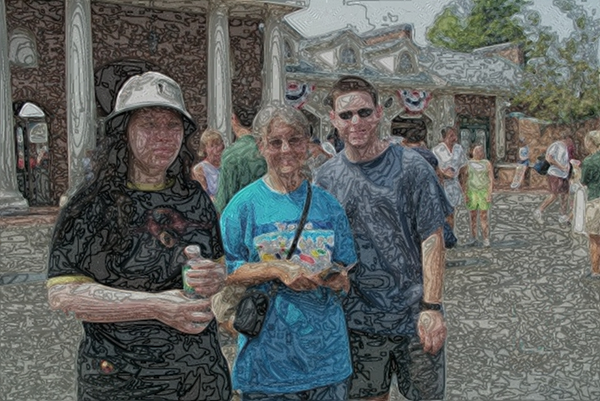 But apparently I did push forward with it eventually reaching this point: 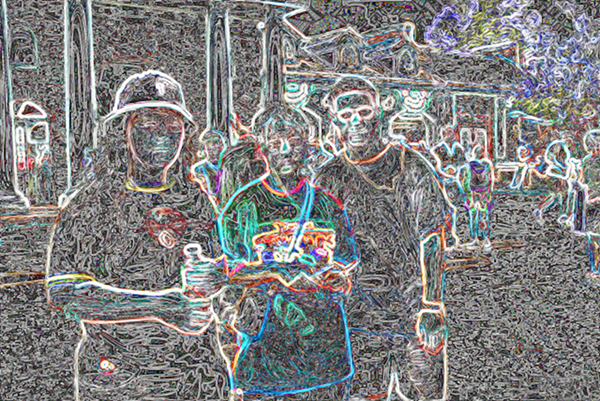 Full size of my mother's face and random bystander behind her: 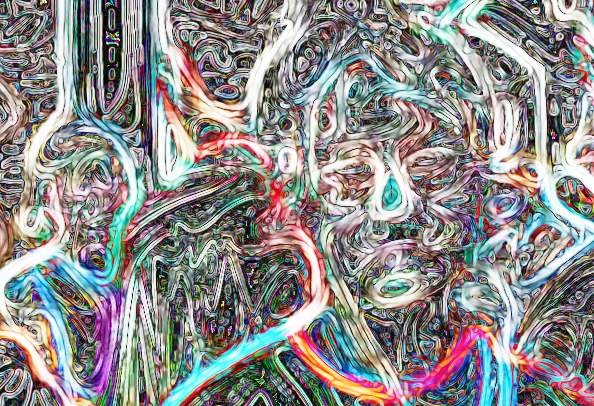 Close up of a section of empty sky with some roof and tree to keep it company: 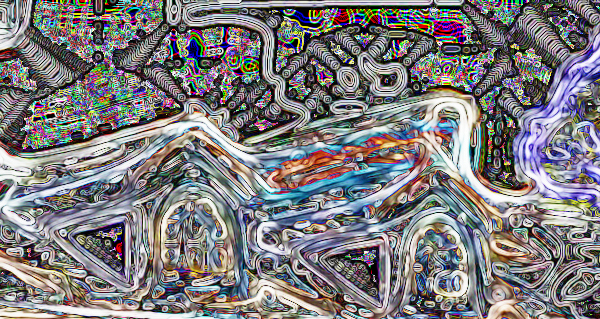 Which was kind of sort of, close enough for a quick thing the texture I was looking for, but not so much the colors.  For some reason it didn't occur to me to use bump mapping (Which wouldn't have helped anyway, I'll show you later) and my initial attempts were less than awesome:

Though it does occur to me that toning down the saturation in fleshy areas of the ones that ended up in the left column might salvage them somewhat.Also the last one seems vaguely impressionistic which is kind of the goal.  For that you probably need a closer look, so here:


(Random People in the background) 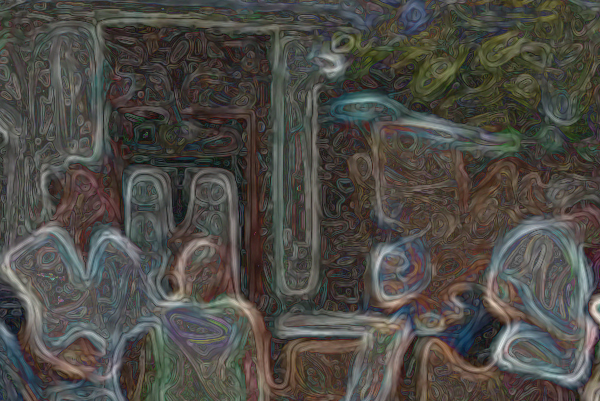 And what I finally settled for I don't think I should have settled for so right now, at this very line, I'm considering alternative possibilities.

Ok, there comes a time when you have to give up and write the deconstruction round up for The Slacktiverse so here's something titled "Good enough for now" 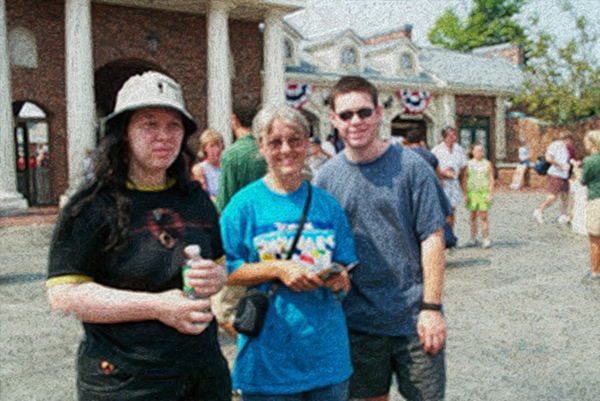 And that's probably the least ideal size to view it at, sorry about that.  From a distance it looks just like the original, at that size it just looks spotty, and here's a full size view of myself and my mother in it: 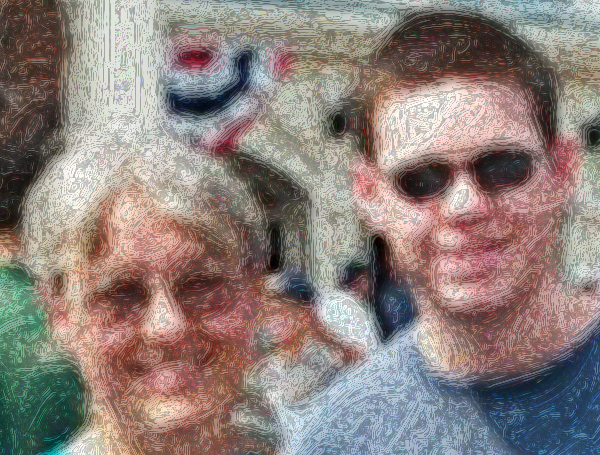 Still crappy, but good enough for now, I suppose.

This is the sky from a picture that failed to look good in non-sky regions:

And I said I'd get back to bump mapping.  Here's the thing bump mapped then scaled down a more reasonable size: 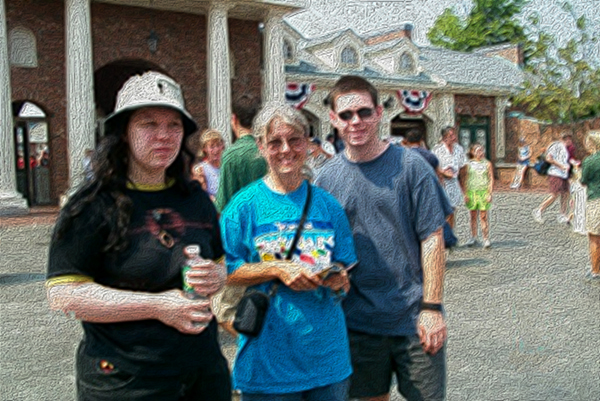 Here's my sister, my mother, and I at (sort of) full size.  The blog isn't wide enough to hold a full size version of the image but I think that even with the blog's tendency to scale down things if you click on it you should see it full size.


Failing that, here it is broken into two pieces such that if you click you will definitely (I think) get it full sized. 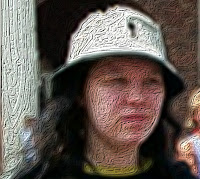 And now I have to go do the deconstruction round up.

Oh, and if anyone was wondering how I dated the picture to "2001ish I'm guessing" it's my hair length.

* Wooden swords are really good a doing severe damage to a person without armor because they consist, basically, of a wooden bat with a stone blade and stone can be chipped to be very, very sharp.  What they largely suck at is standing up to a metal sword in battle.  The wooden sword does more damage to a person.  The metal sword does more damage to other swords.  Without a sword you can't damage a person, thus the wooden sword loses.
Posted by chris the cynic at 10:25 PM