Why are there only blizzards when I have to walk between cities for an appointment? (Now with images.)

The seasons, such as they are, have ceased to exist.  When I was younger it used to get cold sometime near the end of the year, there was an occasional January thaw but barely worth speaking of by present standards, and then it got damn cold.  Until such time as it got warm, and that was spring.  At which point, with less than once in a blue moon exceptions, it stayed warm until it got cold near the end of the year.  Now not so much.

The old overused cliche was, "If you don't like the weather in Maine, "Wait ten minutes and it'll change," and that could be a fairly good, if over generalized, description of the weather.  Now it seems a similar thing could be said of seasons.  Don't like the season?  Wait till tomorrow.  Odds are good it'll be a different one.

I remember when we put a new roof on the garage.  As I recall the job took five days.  In the first four we had what would be considered, weatherwise, one typical day for each season.  Don't remember what happened on the fifth.  I do remember that the summer like day was hot as Hell, and the winter like day was cold as Hell.  If you're wondering how one can say, "Hot as Hell," for extremely hot and, "Cold as Hell," for extremely cold, read some Dante the "Hot as" refers to the hottest portions (which are damned, literally and otherwise, hot), the "Cold as" refers to the coldest ones (which are damned, again literally and otherwise, cold), and the existence of the two leads me to speculate that there must be a temperate zone somewhere in between where Hell actually has a relatively nice climate.

Anyway, this is our second blizzard of the winter, and the first one that's more of a BLIZZARD! than a blizzard, and like the first it just happens to fall on a day when I have to walk between towns to get to an appointment   The good news is that this time I have a way to contact the person to see if it is cancelled and thus, if it is, will not have to walk in and wait around in the cold for a while to see if the other person will show.

[Added]
And as a side note, the six inches of snow falling right now is not a part of the blizzard, it's from a different storm that wasn't expected to hit here.

[Added, again]
These are the views out my two living-room windows of the, "This is the snow that was so insignificant we never mentioned it until it started falling, the blizzard comes later." 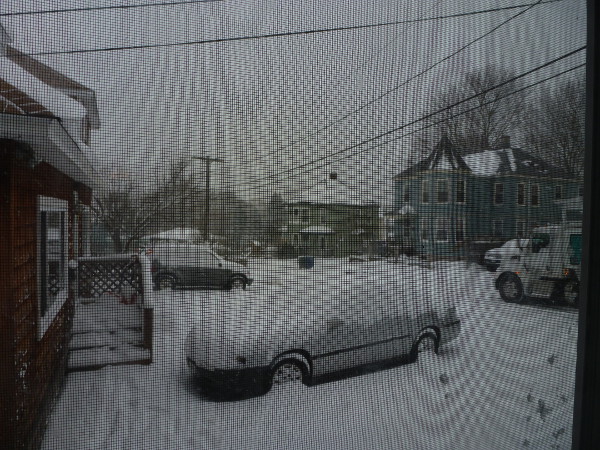 (As always getting close to the screen makes for interesting patterns.
(Next one taken from greater distance utilizing zoom.) 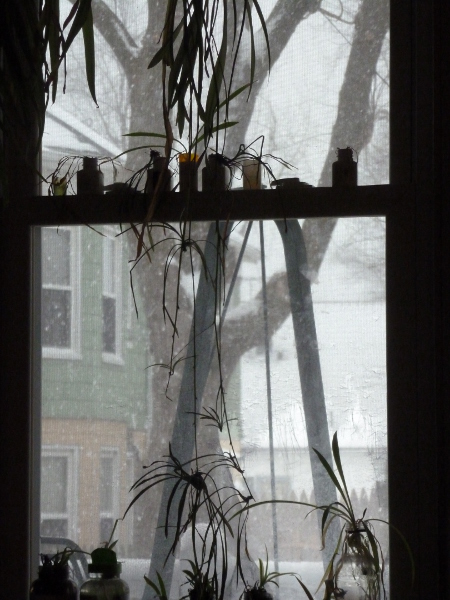 Email ThisBlogThis!Share to TwitterShare to FacebookShare to Pinterest
Labels: Blizzard 2013, I have a blog, Snow