In theory, any game that has a finite number of players, a finite number of moves, and a lack of random chance, can be "solved".  There are three no one expects the Spanish Inquisition possible outcomes to a solved game.  I was going to say win, lose or draw, but that leaves out some things,  First off not all games are two player, second perpetual game-play is a possibility I knew about and was planning to mention before I wrote "Three."

These all assume a lack of mistakes:
1 Player 1 always wins.
2 Player 2 always wins.
2a Player N (where N is a finite integer greater than two and less than or equal to the number of players in the game) always wins.
3 The game always ends in a tie.
4 The game never ends.

At some point in the past, I remember trying to extend the same functionality into additional dimensions.  First off it's worth noting that, and I'll use this fact extensively if I ever get around to writing up my thing on 3-d chess, a line is to two-space as a plane is to 3-space.  So maybe the rules in three dimensions should be that you have to complete a plane rather than a line.

This wasn't what I was thinking in the past and is not what I will use the bulk of this post to discuss, but I will give a quick explanation of what it would mean.

There are three basic planes on a simple 3d grid, but one needs more space than a 3x3x3 board allows to make all 3x3 planes:

In traditional Tic-Tac-Toe the center is included in 4 lines (1/3 of the flat, all diagonals), any given edge is in 2 (both flat) and any given corner is in 3 (2 flat, 1 diagonal.)

The reason I'm not much a fan of this method of Tic-Tac-Toe 3d is that a 3 square line is easy to miss, but a nine cube plane is kind of obvious.

It still, at least, maintains the basic function because it's always going to end in a draw without a mistake, but part of the idea of extending it to higher dimensions was to make a mistake more likely as complexity increased (I know I went to five or six dimensions.)

So the idea was that it would remain a relatively easy to miss three in a row, not a plane.  Plus, I'm not sure if I'd really thought about using planes instead of lines when using three dimensions instead of two.  I think that came from my understanding of a rook.

Make Tic-Tac-Toe into three dimensions by making it a 3x3x3 grid and the first player always wins.

Exact same endgame as we had before.  Player two can choose how to lose, but there's no way to avoid losing.  That's not Tic-Tac-Toe, at least not to me.  A perfect game should end in a draw, losing should require making a mistake.

The center clearly hold too much power, we have to lose it.  (Note that I could have done essentially the same thing if I'd started with center then edge.)

So now we get this: 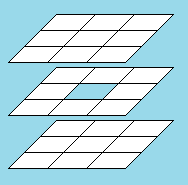 Unfortunately that still doesn't solve the problem.  The corners are likewise too powerful.  Player 1 can still force a win, so we're left with this thing that doesn't look much like a Tic-Tac-Toe board: 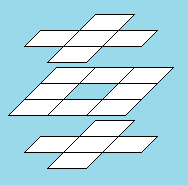 I'm not sure if I considered just removing face centers, but that doesn't solve the problem anyway.  Face centers plus center removed I'm not sure on.  Give me a moment to check.

Moment taken.  If anything it makes the unavoidable loss even more brutal on player two.

So, we're sticking with the above board, which doesn't have any diagonals (shameful loss) but does, I think, lead to a draw if no one screws up.  I think, I probably haven't done as much checking as I should.  Anyway, four dimensions.  First, let us extend the above board without too much thought as to whether or not it leads to forced wins.

I already extended a board without much explanation, now I should probably give some.  Before we just took a 3x3 and made it into a 3x3x3, which is relatively straight forward. this requires some more thought into what it means to extend a board into a higher dimension because we've got a strange shape to begin with.

First off note that we're working on something with symmetry, no matter how you rotate the above shape in three dimensions it'll always look the same.  So to extend we keep that symmetry.

Since I don't have a four dimensional space the extra dimension will be represented by extra boards.  Just like how I represented three dimension in two by using extra boards (note the three levels on the thing above.)  I could have put those boards side by side, if I wanted, and it still would have been the same game, it would just have given less of an impression of the 3d structure I was trying to imitate.  For the fourth dimension we will put boards side by side.

Now, about distance.  Moving between adjacent boards is moving one space.  So take a look at this image: 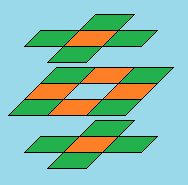 And I feel like I'm beating the obvious here.  There's nothing really special going on about this, just imagine turning the thing on its side and rotating the squares to create new flat boars and you'll see it's all the same.

The point is this: put extend the board above into four dimensions and you get this:

(By the way, how do people feel about a sentence with two colons, as above.  Kosher?  Blasphemy?  Something in between.)

Now that's just taking the 3d board and making it symmetrical under 4d rotation.  Something that I think managed to completely escape my notice when I was first doing this (but god only knows where those notes are so I'm working entirely from distant memory) was that if I had done the same thing when extending into 3d I would have gotten a board without corners anyway.

The corners were a new kind of space, impossible in 2d but obvious in 3d.  I could see what would happen if I added in the 4d equivalent here, but for now I'm going to stick with trying to reconstruct what I made lo those many years ago.

For anyone confused by what these pieces on the new boards are, here's a picture using the same color coding as before (click to enlarge):

And here are some examples of possible winning moves that cross the three 3d boards (again, click to enlarge):

Diagonals are still impossible, but as mentioned back at 3-d, I couldn't find a way to save them without allowing player 1 to force a win.  So, basically, on a given board three in a row is exactly what you'd expect, and across boards it's three in the same place on each board.

And some quick tests show that my original work, which did indeed look like that, before getting extended to additional dimensions, was flawed.

Though actually more extensive tests show that, yes, it's flawed, but it actually can take a while to figure out how to force victory from given positions.  Still, no mistakes and the first to move automatically wins.  The goal was for automatic draws in the absence of mistakes.

And it looks like restricting the first player to starting on a less powerful square doesn't change that.  Can't take away more pieces like I did after the conversion to two pieces, there's only two types left and take away either one and it makes it impossible to get three in a row.

I wondered if maybe returning the center, but not letting it be taken until the second move (thus giving it to player two) might fix things but then it just made things always win for player two.  Presumably some balance can be found between returning the middle square overpowering everything and keeping the current game board allowing the first player to force a win, but damned if I know what it is and I'm actually fairly tired right now.

Anyway, if it doesn't work in four dimensions it certainly won't work in higher ones that use it as a base, but as I recall the plan was to look something like this for five: 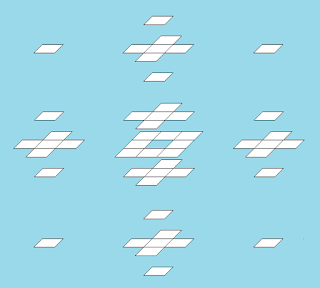 And just add this above and below for six: 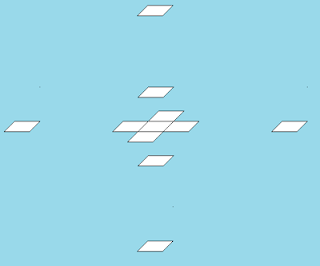 And that was the plan at any rate, near as I can remember it.
Posted by chris the cynic at 4:18 PM

Email ThisBlogThis!Share to TwitterShare to FacebookShare to Pinterest
Labels: games, I have a blog