The plan, such as there was one, didn't have me writing this post after midnight.

Originally I was just going to stay inside all day, then I was reminded that there were plans for tomorrow so the plan was altered more or less, to "Wait until the damn wind stops, then shovel."  Based on photos I took the wind stopped round about 8:18.

Or at least that's when I finally got to work.  Picture without flash because I had to take it through the window in the storm door.  Getting the door opened involved shoving it through the snow I was taking a picture of. 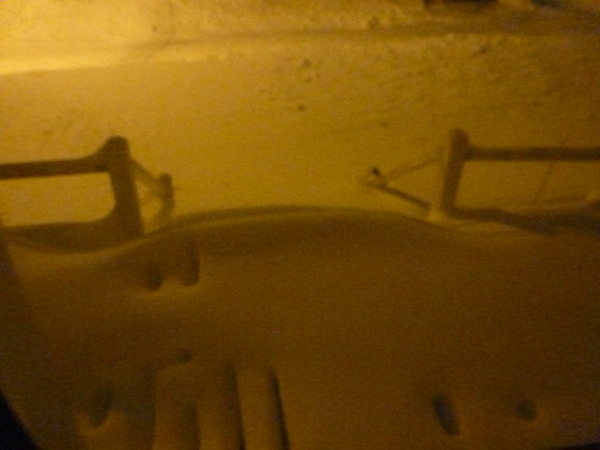 More or less the same shot just with the door opened, one step forward, and with flash: 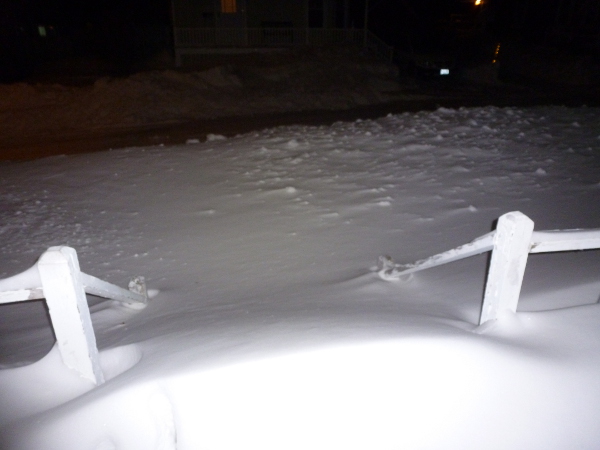 I think this looks pretty, also you can see one of my shovels: 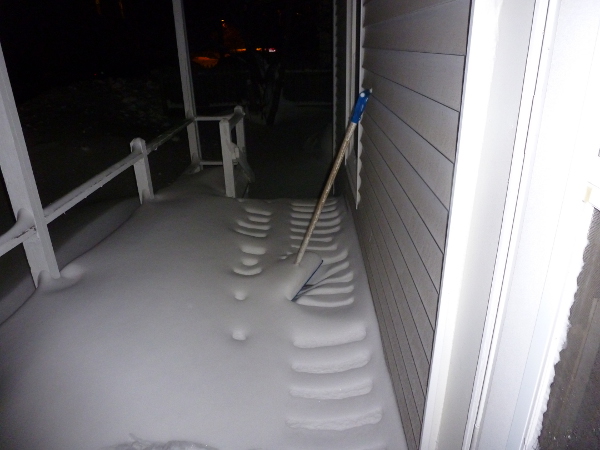 And I was surprised to discover that the second shovel is actually visible here, it's not the wooden handle.  Here's a hint, to find it I had to rake through the snow until I hit something: 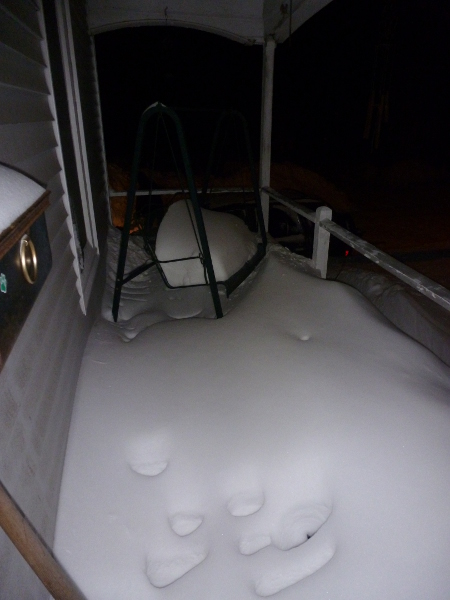 Ok, so some pictures taken, it was time to start working, and here's a bit of a problem.  The only real way to properly express tedium is with tedium.  So prepare for a lot of images. 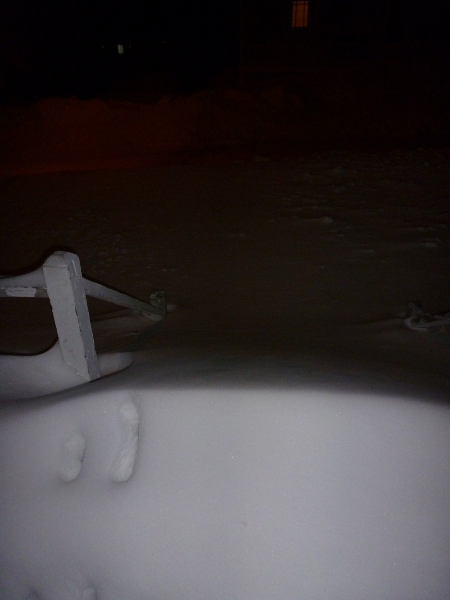 Work work work and it goes to looking like this: 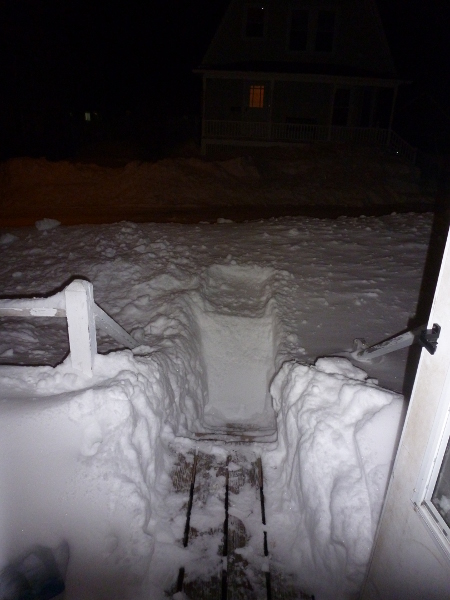 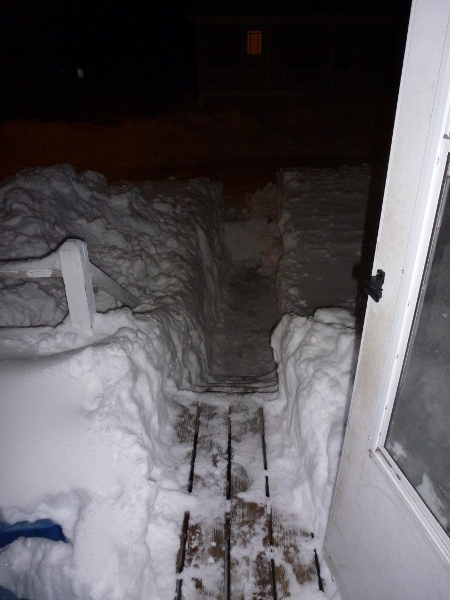 (Remember that that's looking down on the part that remains to be shoveled, which makes it look smaller than it is.  You definitely cannot access the street without crawling through a snowbank at this point.)

At this point I had the idea of turning around and taking a picture pointed back at the house: 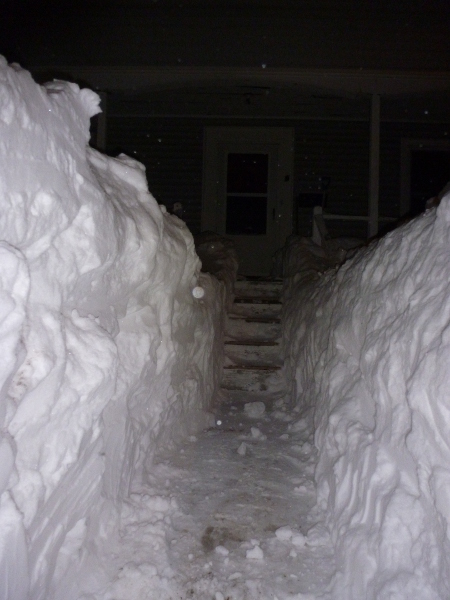 And then opted for the same direction when I did break through: 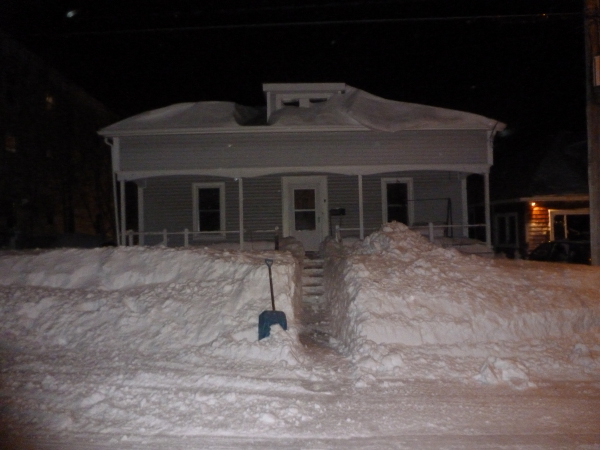 Points of interest are the second shovel, no longer covered in snow, and the lack of a driveway.

If you're wondering why the snow all got shoveled to one side (picture right) it's because the wind never really died down all that much and throwing it in the opposite direction was an untenable plan.

Another thing to remember, when it's cold as hell and you're taking flash pictures, hold your breath.  Otherwise this might happen: 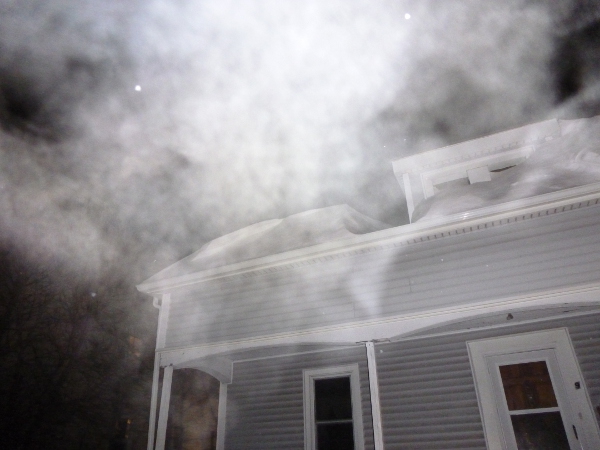 That is not an alien cloud being trying to make contact and establish peaceful relations with earth people, that's what it looks like when I breathe out and it's fucking cold.  Without flash you might be able to get -

Without flash you might be able to get a semi-decent picture while exhaling, but with flash you'll definitely pick up your breath.

And the plow came by again, probably making it so I'll have to shovel out again.  When it went by once there was a slim chance it was using the street for transportation, but the second time makes it clear it was actually plowing.  Given which side it did first, most of the snow plowed would have ended up on my side of the street. 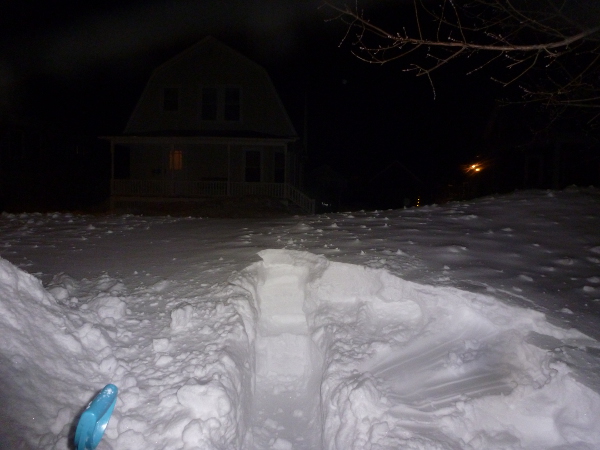 (note how level the snow on the picture's left is/) 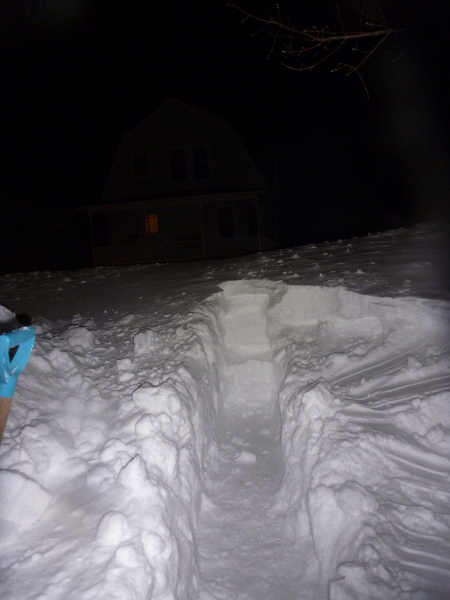 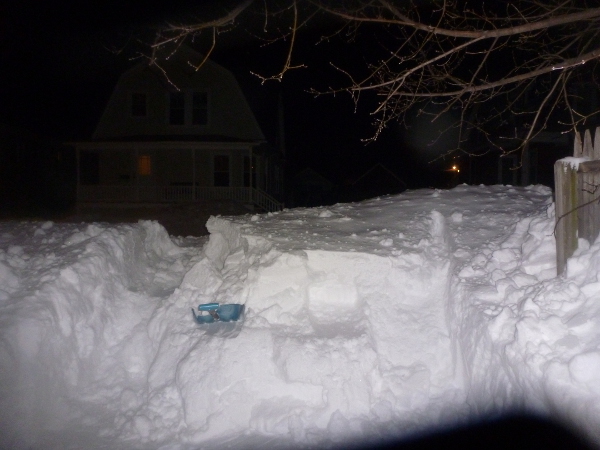 If you think you can see through the shovel, you're not imagining things, it's just broken.
Still the best shovel I have.

Also note that the ideal of a built in lens cap is great and all, but it tends to stick when it's cold.  That's the strange dark spot on the bottom right. 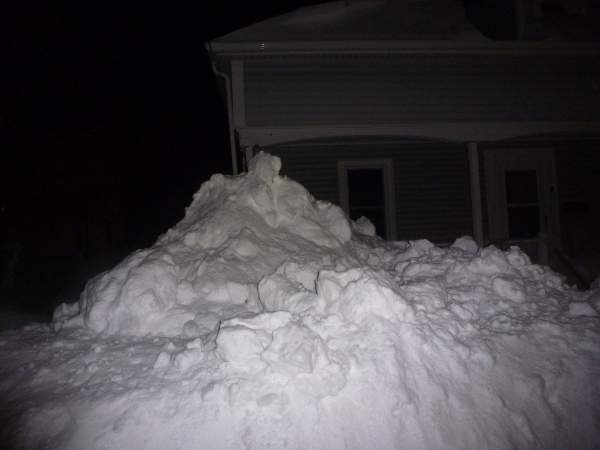 Remember the level snow that I told you to note?  This is a view from the street of what became of it, and that pile will get higher as I haven't even broken through to the street, much less cleared the driveway, yet. 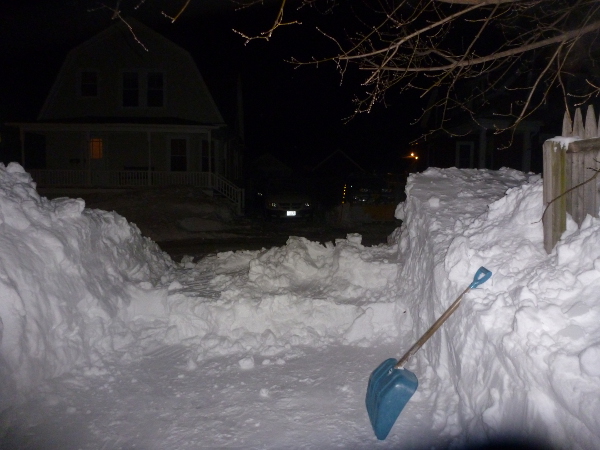 Still work to do.

Done with the driveway: 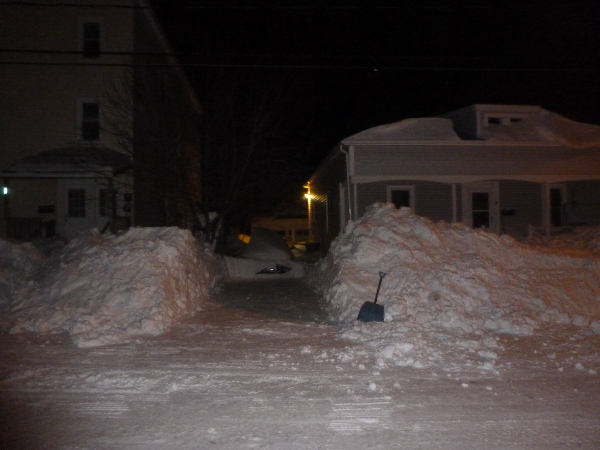 Is that a car I see? 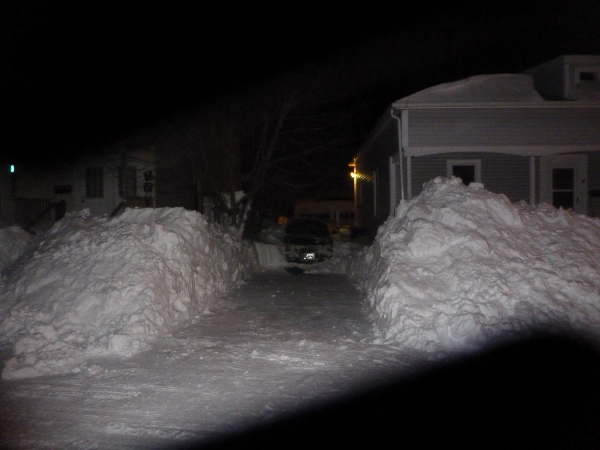 Yup that's a car.  Still needs the snow around it cleared, but before we get to that: 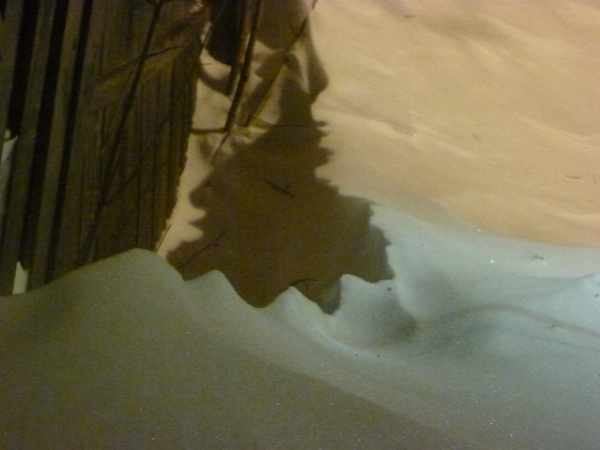 This snow drift has Godzilla spikes.  Ok, maybe not Godzilla, but that sort of spike on the ridge of its back, clearly juvenile in form, but left alone soon it will be snowzilla.

For the record, I left it alone.  It wasn't in my way.

Also before we get to the cleared around car, have a side view of the giant pile of snow: 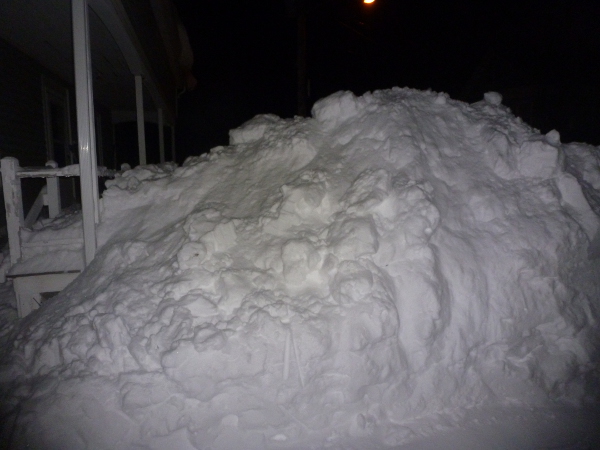 Car cleared out around: 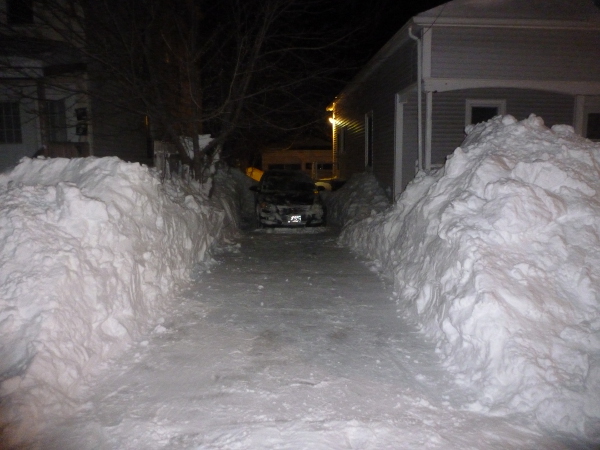 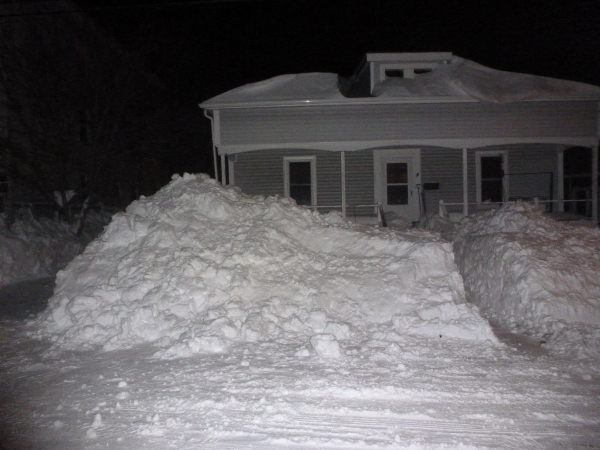 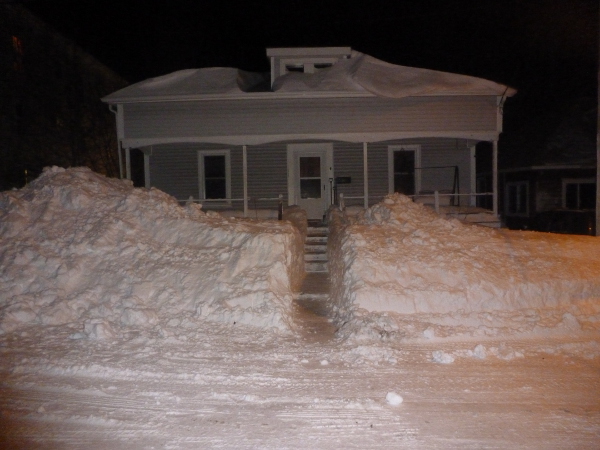 The path up the front: 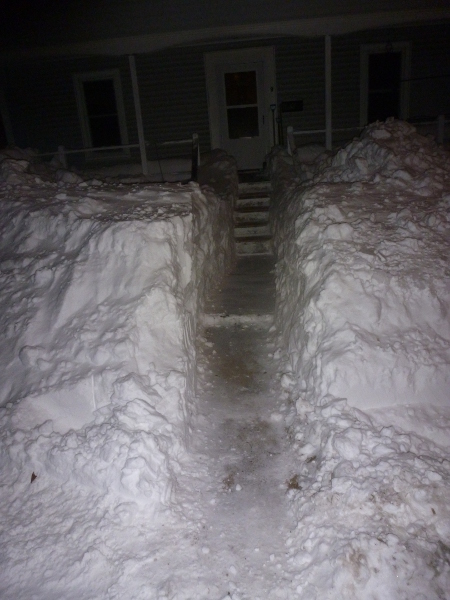 From a lower angle: 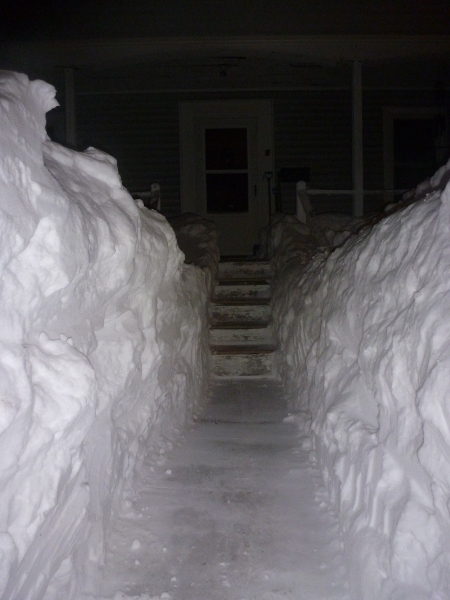 The only tools I used:
(the two shovels, the one in back I use to break up ice which wasn't necessary today) 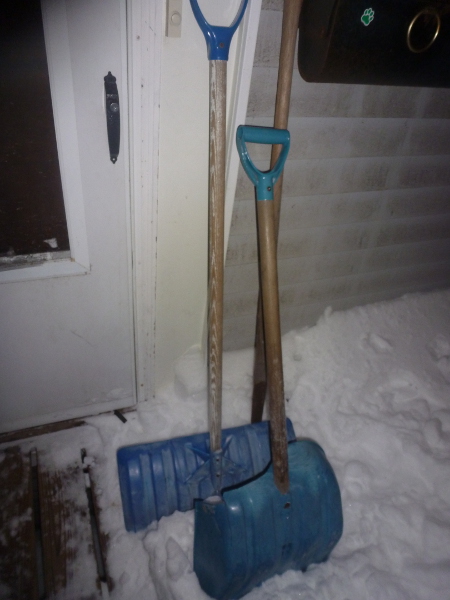 Remember that shot I said looked pretty at the beginning?
Here is it after being cleared, not so pretty but much more walkable: 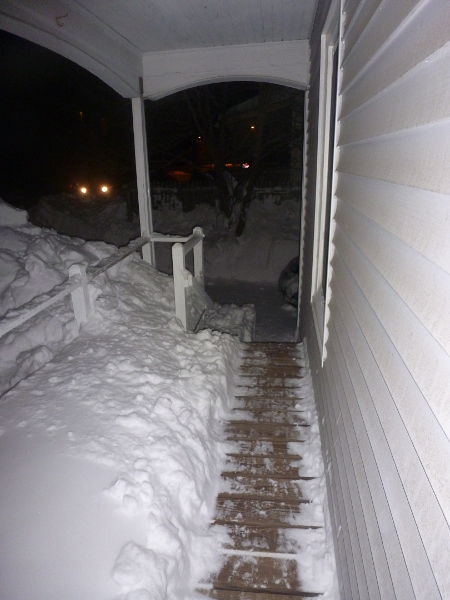 And finally to bring us full circle, this is what the front path looks like if you're facing out: 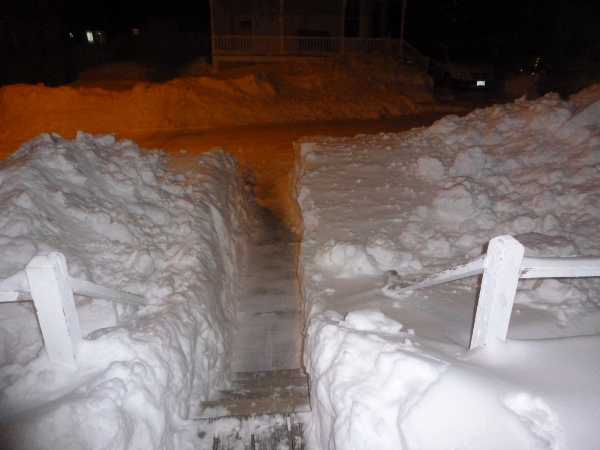 And that was a lot of fucking shoveling.

-
[Added]
I forgot to say why the shoveling isn't over.  Do you see my side walk, the one that runs the entire length f the property from one neighbor to the other, in any of the pictures?  I don't either.
Posted by chris the cynic at 3:44 AM

Email ThisBlogThis!Share to TwitterShare to FacebookShare to Pinterest
Labels: Blizzard 2013, I have a blog, pictures, Snow