I made the paper

The free paper, The Portland Daily Sun, but I'm on the front cover in color, so that must count for something.  See: 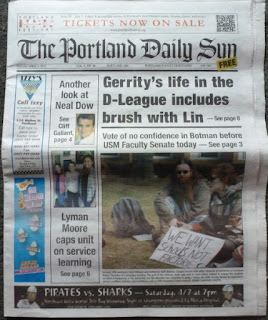 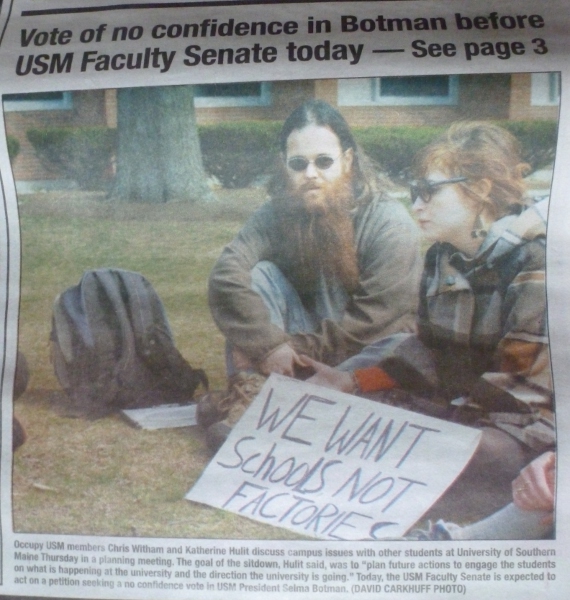 Ok, so the story is this:

I attend a university.  USM.  Which stands for University of Southern Maine.  It's a good school.  It's currently being run by someone who is not good at what she does.  Selma Botman is just not a good administrator.  She makes decisions the same way we've seen Republicans do when they're claiming to be fiscally responsible: She cuts without thought to what the costs of such cutting will be, she spends where she wants to while telling everyone else there's no money at all.

One of her earliest moves, and I didn't know about this until the meeting where I was photographed, was to shut down the daycare.  The daycare with a one year long waiting list.  The reason that there was a daycare was because if people don't have a place to put their kids they can't attend classes.  That had to hurt enrollment, it can't not.  It also signaled clearly that she wasn't concerned for the students.

In the past few years upwards of three million dollars have been cut from academics and transferred into non-academic areas.

We haven't been hiring new teachers to replace those exiting.

The faculty have been working without a contract.  They're being offered a .5% raise over the next two years.  They haven't had a cost of living raise in three years.  Because, apparently, we have no money.  On the administration side, where Selma works, there have been raises.  The biggest being upwards of 40%.  You know, more than 160 times what the teachers have been offered.

But that's not the big thing.  The big thing has to do with the fact that, even though enrollment hasn't dropped enough for us to be losing money* we are losing money.  A lot of money.  As a result each of the colleges that make up the university have been told to cut a million dollars from their budget.  This means firing people.  There simply isn't enough money for it to be otherwise.  (It will be the lowest rate that academics have been funded in our history.)  That's the big thing.

In that situation we shouldn't be giving out raises.  Not when it means other people losing their jobs.

And the problems go so far beyond that, because the cuts will make us a worse university, which means lower enrollment, which will be used to justify more cuts.  Everything Selma does puts downward pressure on enrollment.**  She's trying to cut things from the budget without considering that a lot of the time doing so cuts revenue.

And it's not like we don't know how to make money, we've got departments that have more demand than we can supply.  If we expanded those we could make more money almost instantly, but we aren't.  Instead other parts of the same university system are trying to set up outposts near us and poach because we're leaving so much demand unfilled that it's actually profitable for them to set up entirely new facilities.  All we'd need to do is hire new staff.  Whatever they're netting, we could net more.

But no, the only solution she sees is to cut, cut, cut.

And she is a complete and total ass, for what it's worth.  When someone asked her a substantive question (which was about how the drop in enrollment related to the drop in faculty) her response to this language teacher was, "You know, Jeannine, plenty of good universities just use Rosetta Stone and don't even have language departments."  Yeah.

So, first, people don't come to university to take Rosetta Stone, which means that'd drop enrollment even fucking more.  Second, threatening to fire someone, and every one of their colleagues, when they ask you an unrelated question is not an appropriate response.

Also, Selma has changed her habits since it looked like a no confidence vote might be coming***.  She used to ignore the faculty.  For example, she had them design a reorganization plan, and then once they signed off on it shut them out from any input (which the plan required and without which the plan has not worked.)  Now she attends every meeting.  Every single meeting.  If the faculty is going to discuss anything she'll be there, watching.

My response to this was, "marking and designating faces for death with her eyes," which isn't quite right, it should actually be "every one of us" instead of "faces" but the point here is that I wouldn't be able to make an Against Cataline I reference from memory if I'd learned from Rosetta Stone.  (Original Latin: notat et designat oculis ad caedem unum quemque nostrum.)  Classics: it lets you make strange references.

Anyway, the faculty is awesome, the administration sort of sucks.  That's what's going on here.

**   Her current plan to fix that is to recruit students from China.  We have nothing to offer Chinese students, we don't even have enough of a Chinese presence to teach the language.  If they want to be thrown into US culture and told to sink or swim on their own, then we can offer that, but not much more.  Our dorms are not exactly awesome, and you know who else is recruiting students from China?  Harvard.  I'm sure we'll be able to compete with them so well.

*** It came.  A summary of what happened with the no confidence vote can be found here.
Posted by chris the cynic at 8:26 PM

Email ThisBlogThis!Share to TwitterShare to FacebookShare to Pinterest
Labels: I have a blog, The many and varied scandals of Selma Botman, USM