Otherwise known as, "This was just supposed to be a temporary solution, so I didn't use dirt."

Technically I don't think it counts as hydroponics if you don't put some kind of nutrients in the water, which I don't.  I don't actually do much of anything to keep the plants alive, which might explain why some of them don't seem to be generally healthy so much as in varying states of life and undeath.  But I'm getting ahead of myself.

First, this post is, basically, just going to contain pictures of plants, if that doesn't interest you, which it probably doesn't, feel free to skip this.

Second, my family has a plant, and I have a plant, and they are both spider like.  Family one on the left, my own on the right:

As with anything living in my house, neither one is exactly a picture of health.  My plant is entirely one sided because I should try to rotate it or something but I don't.  Anyway, my plant seems to have a tendency to to fall apart.

The parts that fall off of it are usually, though not always, perfectly healthy seeming, they're just suddenly disconnected from the plant they were once a part of.  If you just leave them like that they dry out and die, so at some point I put one in water.  And then another, and another, and so forth.  Now I have three windows and a counter occupied. 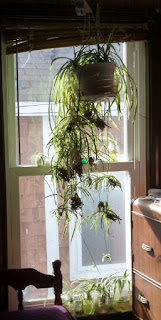 Yeah, I leave the shade down on my plants.  Also I have purple sheets that I got in order to portray Dionysus. (God of wine, bringer of madness.  It was a short production of the Bacchae, you know the deal.) 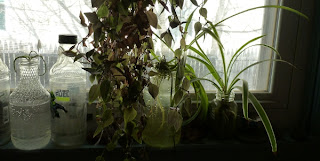 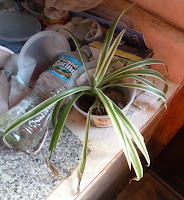 It is impossible to take a picture of the position of the plant on the counter without revealing the clutter that defines my house, so I'll just come out and say it: My house is defined by clutter. 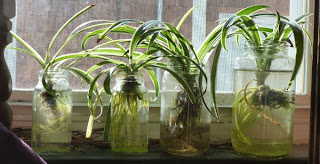 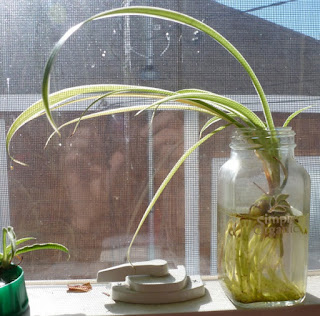 This has become my standard plant holder, it's a spice jar. 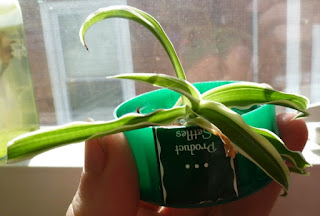 Lemonade cap, came from my sister raiding some high end store's dumpster.  Dumpsters apparently have perfectly good juice in them.  Or, at least, I haven't died yet. 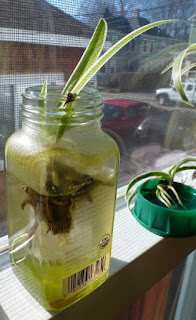 It's basically impossible to get a good picture of the above plant, but note that the leaf facing the camera is actually preventing it from falling into the jar.  It's the only example of a load bearing leaf I've seen. 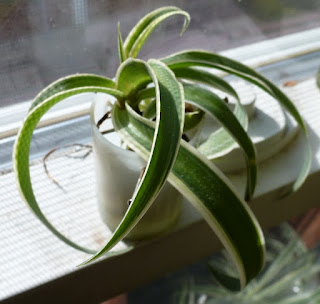 That's a film canister, you can't really see it but there are three pin like things punched through it.  Arranged with the hope that this could provide additional water while this part was still attached to the main plant.  That didn't work out. 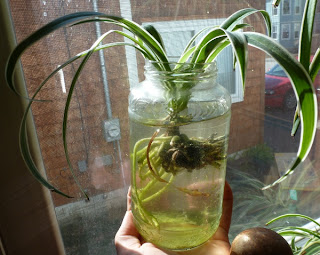 This is the oldest of the fragments.  I'm pretty sure. 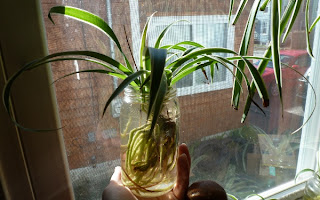 I'm not sure, but this might be the only fragment from the family plant.  If it isn't then I think they're all from my plant. 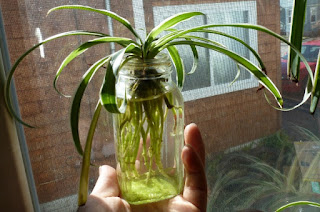 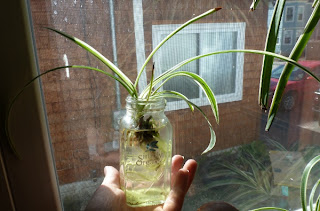 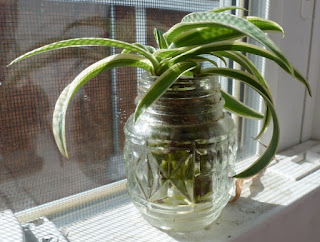 I thought for sure this was going to die, After it fell off the main plant I tried to clean it up by removing the dead leaves, they took with them all of the live leaves except for one sort of tiny protoleaf.  I figured I'd killed it, but I put it in the salt shaker anyway, filled the shaker with water, and put it on the window.  Now it seems to be doing great.  The leaves that broke off (which stayed together as a single piece) I put in a bottlecap filled with water, they also survived and have since graduated to a bottle.  They're in the kitchen. 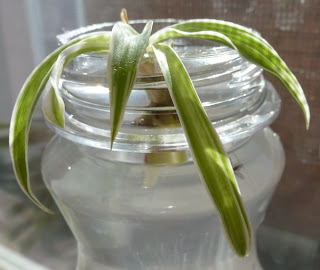 Lemonade bottle.  Fell off the main plant at the same time as the one in the lemonade cap, not entirely sure why I put the smaller plant in the larger container. 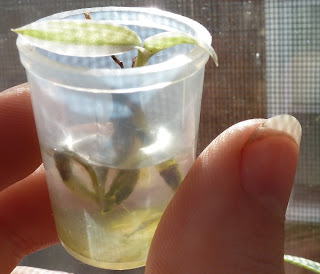 Smallest plant I have.  All of the original leaves died, but those ones are new. 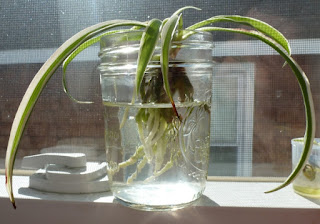 Not sure what this is, it's made in the US and measured in milliliters, some sort of fruit pictured on it.  I think it might have been a jam container. 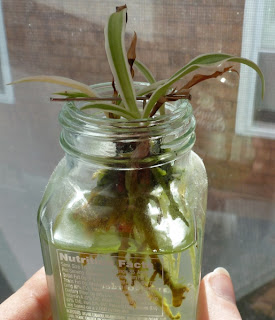 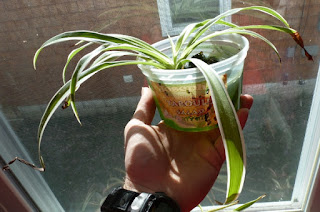 Tabouli salad container, I don't know that I've ever had tabouli salad, my mother likes it. 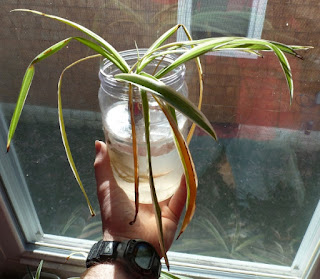 This plant does not seem to like the peanut butter container that I so generously gave it, not sure why that is. 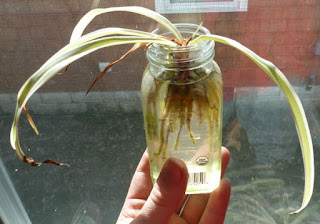 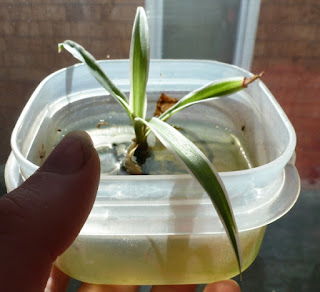 This one used to have white leaves that somehow managed to be healthy in spite of being, you know, the wrong color.  But then I forgot to water it for a while, and it lost it's original leaves.  All new leaves now. 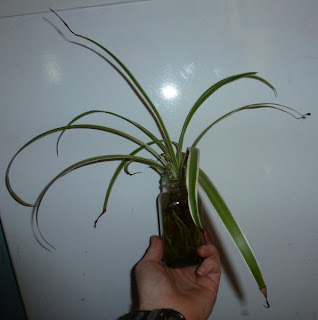 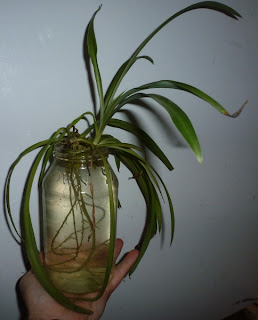 This one was actually difficult to get to spring roots. It had leaves shooting out in all directions and didn't want to touch the water.  I had to put a spoon on top of it to hold it down so it would stay in contact with the water and thus sprout roots. 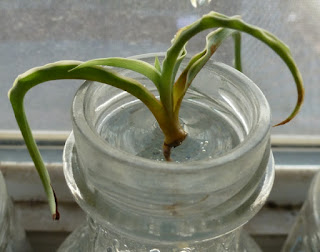 This was the top of the plant in the saltshaker.  When I pulled off a dead leaf all of this came off.  I wasn't sure if there was any point in putting it in water, but I filled up a bottlecap with water and set it in there.  For a while nothing seemed to happen, then it started growing a root.  Then the root got so big that the plant kept on falling out of the bottlecap, which is when it moved to its present home. My cat drinks out of this plant.  That's actually an improvement, there was a time (back when there were far fewer fragments to care for) when she drank out of the plants at the bottom of the primary window, which invariably knocked them over spilling water all over my floor.
Posted by chris the cynic at 7:24 PM