The post for November is lonely. I have 17 in September, 117 in October, only one in November. Clearly it needs a companion, and since I'm not the sort to rip out something's rib in order to grow it one that means that I probably have to write one from scratch.

A few days ago there was frost, frost is actually quite pretty, but it doesn't photograph all that well. Sparkles, whether frost based or otherwise, tend to photograph even worse. I was walking to school and I happened to have a camera, and so I spent more time than I should have trying to photograph things that don't photograph well. This is not all that unusual for me. I take pictures a lot, I then do pretty much nothing with them. They sit on my hard drive ignored and forgotten. I was thinking of sharing some, I made a short list of ones that might be worth sharing, but basically the only thing that has me making this post is one.

Between my house and my school is an estuary, and as I crossed the bridge I noticed some things. The first was that the water was unusually still, you could actually see reflections in it. The second was that it sparkled and since I was already in a photographing sparkles sort of mood, when the sparklegull arrived I took some pictures. I'd actually put the camera away, I think, and didn't get it out int time to get a photo of the landing which was impressive. Ripples of sparkles spreading out in concentric circles.

Instead what I've got here is the sparkles it left in its wake after it started moving: 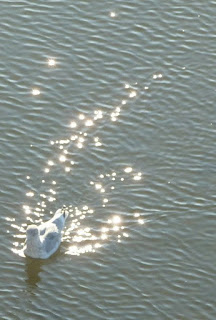 Now that looks washed out, possibly because the camera is pointed in the general direction of the sun, possibly because I might have had the camera set up to take pictures in the dark of night. Fortunately gimp, my image-playing-with program has auto color correction thingys. White balance is somewhat overzealous, it made the water look not washed out at all when anyone who's seen it in person knows that around here the color really isn't that blue. Stretch HSV seems to have it about right, and equalize comes out as vaguely religious: 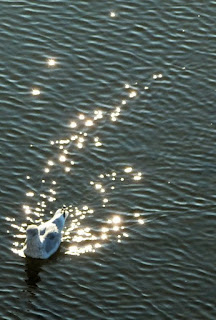 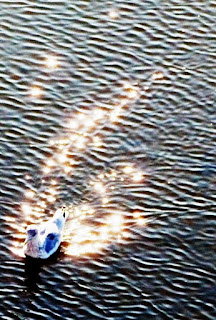 At some point somewhere I found a way to make an image look like a painting by running it through inkscape, exporting back into a bitmap, running edge detection on the bitmap, and then doing something to combine that with the original in gimp. I haven't been able to figure out exactly what that last step was, I know that it wasn't what I've done here, but this seems pretty artistic looking to me: 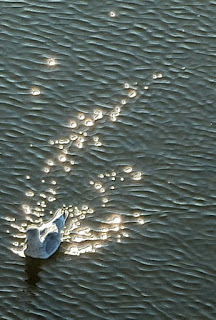 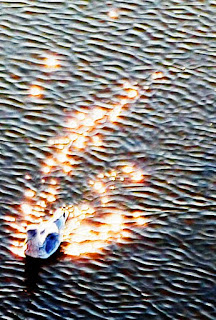 All of the above is actually about a third of the size of the original image, mostly because the original is huge so I figured I'd scale down here. Other than the first image is entirely unmodified. The others, obviously, not so much.

I think that the general take away here is that vampires don't sparkle, seagulls do.

The formatting hates me, hopefully it's working now.

Also, what you're seeing are not the 1/3rd sized images, they're even smaller. Click on the thingys to see the larger size.