Sometimes you have to ask, "Why is there a knife embedded in my floor?" and evaluate your life

So, you all know, and are probably sick of hearing it repeated, that I don't have a working clothes washer.

What you might not know is that I do have a working dishwasher.  I just haven't used it in months.  When I said that I haven't been able to get myself to do much of anything, that included the dishes.  And when I did use it about three months ago that was sort of a one-off thing even though I was hoping that it would be the start of repeated uses so that I could have clean dishes.

But that didn't work out.

Of course since I've been doing a terrible job of actually feeding myself, this hasn't hindered me much.

But it does bring me to pizza.  Pizza that blessed food that neither wants nor needs dishes.  Not just any pizza though.  Frozen pizza.  No real preparations, just take it out of the package, put it on a pan, set a temperature, set a timer, put it in, and soon your food will be there.

Except it's important to be clear about something.  Really good frozen pizza.  Not the crap stuff.

Obviously it's out of my price range to have this with any sort of frequency, bur when I can it's great.

There's an important problem though, one that I always forget until its time to take the pizza out.

My pot holders are all missing.

I'm sure they can be found.  It just requires cleaning, organizing, doing dishes, and so forth.  None of which can really be done when you just need to get the damned pizza out of the fucking oven.

Usually it's not a huge problem.  There are lots of ways to remove stuff from ovens without getting burnt.

Today was turning out to be a good day.  I was watching Nausicaä of the Valley of the Wind for the first time ever.  I had to put it on hold to take a phone call but it was a good phonecall, and if you know the animus I have towards phones you know that it had to be good for me to describe it as part of a good day.  The call ended when it was time to take the pizza out.

I was already feeling pretty bad when I thought that the worst was that part of it touched the oven heating element and also the cheese was messed the fuck up.  But, of course, it didn't end there.

No, as soon as I saved it from that fate it flipped in the opposite direction, hit me (not enough to burn but quite enough to get tomato sauce all over my skirt, see things come back around to the lack clothes washer) and landed sauce side down on the floor.  If it had been crust side it might have been salvageble.  Sauce side means screwed.

And at that point, in a moment of, "I can't take this shit," I cried out in frustration and threw my hands forward, releasing what was in them along the way. 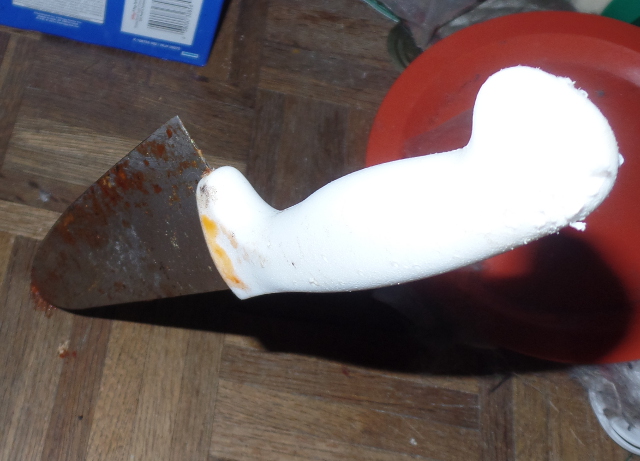 Now I know what you're thinking: Is that a giant empty poptart package?

Yes, yes it is.  I should have recycled it ages ago.

But I can do one better: 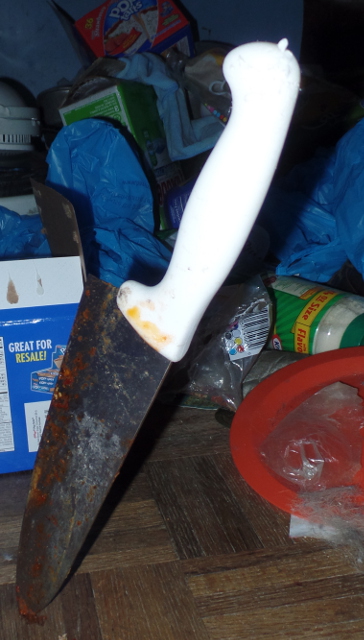 See the other empty giant "great for resale" sized (when you have limited money, buying in bulk helps provided you can afford it) package of  pop-tarts?  The strawberry pack in the back at the top of the image?

I have no idea how long that's been in my house.  I couldn't give you an exact date on the one nearer the knife, but I very much doubt it could be more than several months.  The one in the back, no fucking clue.

Also, yes the knife's handle has been used as a chew toy by a dog.

It was actually in there pretty strongly.  Took more force than I expected to get it out.

Anyway, at times like this I wonder what the point is.  Why even try.  Maybe someday I'll have a good answer.