So when I last shared pictures, less than a fortnight ago, it was the closing day of January and all was snowy with the world.

As I recall I was away from home at the time, and I hadn't had time to sufficiently shovel before I left.  I'd instead been forced to crawl into the snow and drag out first my recycle bin and then my trash bin because I did not have the time to actually shovel all the way to them.

I showed in that post how the snow I had to shovel through to get to the two bins was taller than they were (taller than I was too, I think) with a nice shot from the path I'd shoveled to get me street access showing the way the snow sloped gently downward as one got away from the heights the plow had pushed up.

Before I get to that, though, plugging in my camera has made me realize that I never got around to something I meant to do.  So way back at around the same time I took those other pictures, here were some common objects:

The neighbor's car being smaller than a snowbank:

Me (the camera was in a hedge): 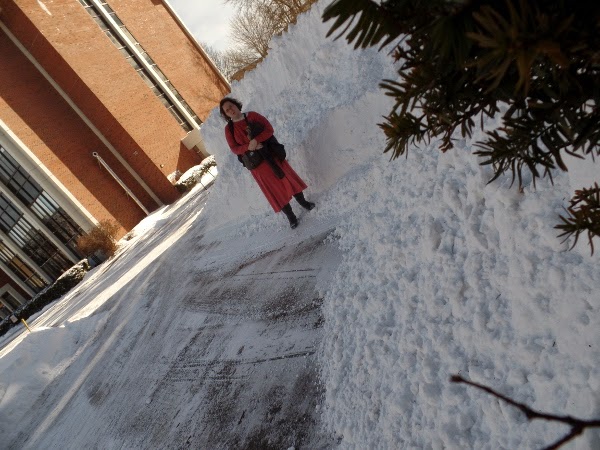 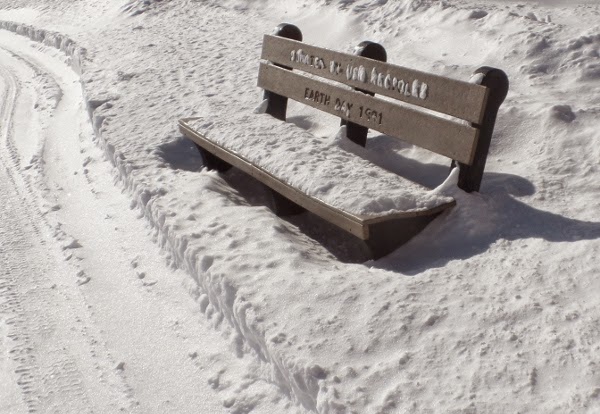 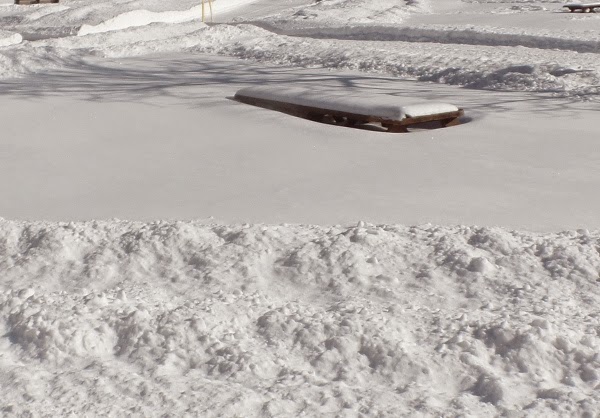 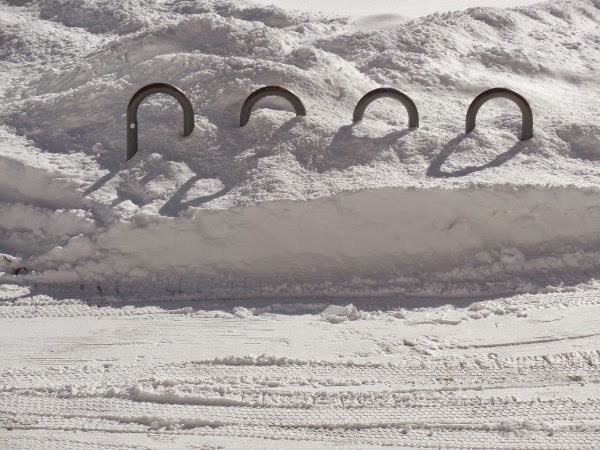 Proof that some people start shoveling and then go, "Fuck it,": 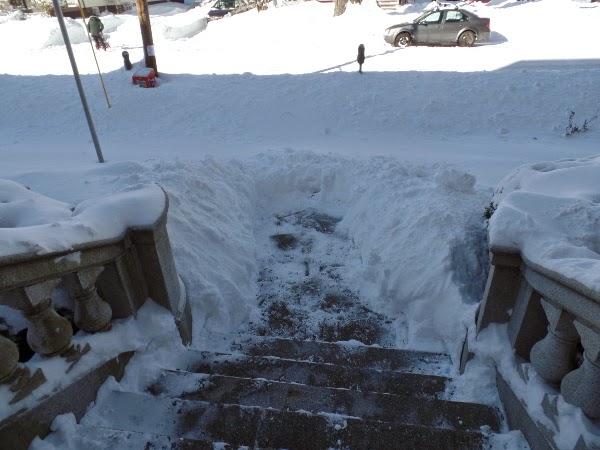 (Actually, this could be because school was originally supposed to be delayed,
hence me being there, but was then cancelled outright.  The end result being
that they had no need to clear the path and could wait until the city got around to it.) 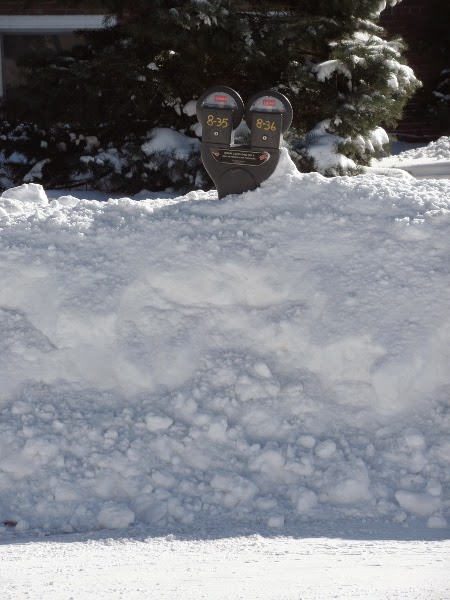 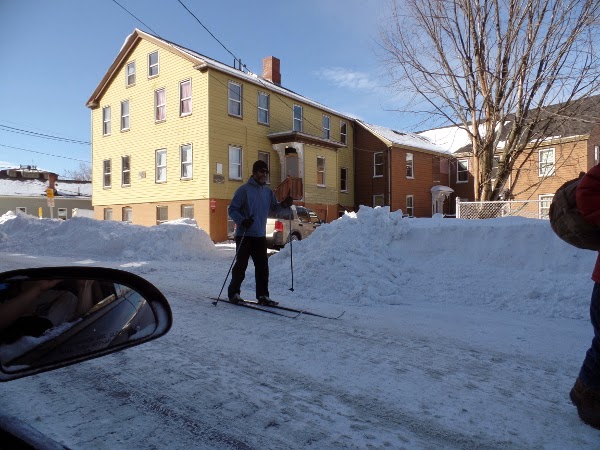 The thing that one should probably take away from these images that I meant to post last month and then forgot about is that the snow, at that point, was relatively light.  You could still see, for example, that there was a picnic table.  Later on, when I was sadly lacking in camera, it was just a bump.  But that was a while ago and now there is more and who knows what can be seen these days.  We'll get to that, in chronological order of course.

We'll be telling the story primarily by repeatedly revisiting two stock images.  One is my trademarked really bad job of stitching together what it looks like looking out my front door (though sometimes I got the panorama function to work.)  So shots that look something like this: 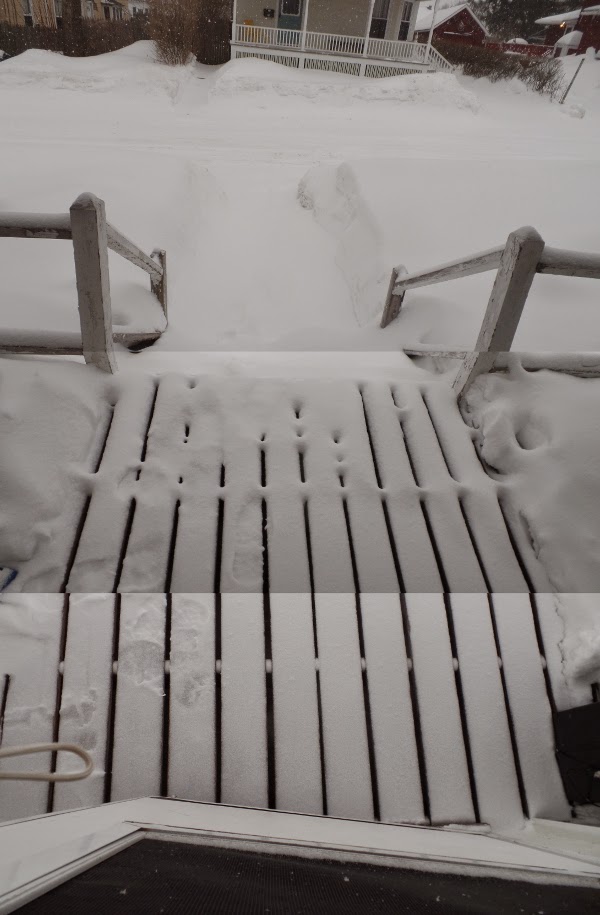 The astute observer will notice that even this early in our trek through these snowy days, passage to the street has been cut off.

Also, if you were paying attention to the blog at the time these storms were happening you might remember that at this point in time I had no heating oil.  The temperature was a bit chilly and dropping.

The second stock image we'll be using to monitor the development of the situation is the one that occurs when I walk across the street and take a picture of the front of my house: 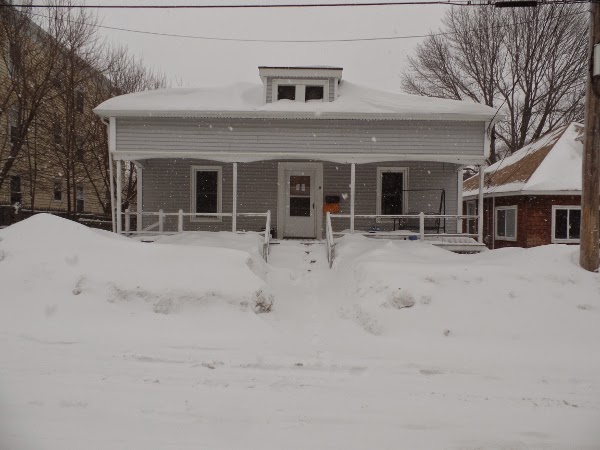 So that doesn't look so bad, right?

And here, have a look at those bins I had to crawl through the snow to get out in time for trash pick up: 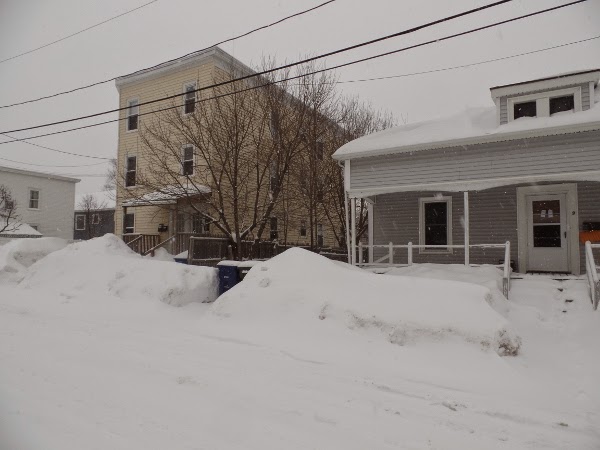 They still have access to the street and everything.

That area would become important, though not well documented, because in order to make a path to the place where the oil goes (they don't deliver if they can't get to it) I arranged the bins to be one in front of the other and in the space that opened up was used as the entrance to my path.

Regardless, that's day, this is night: 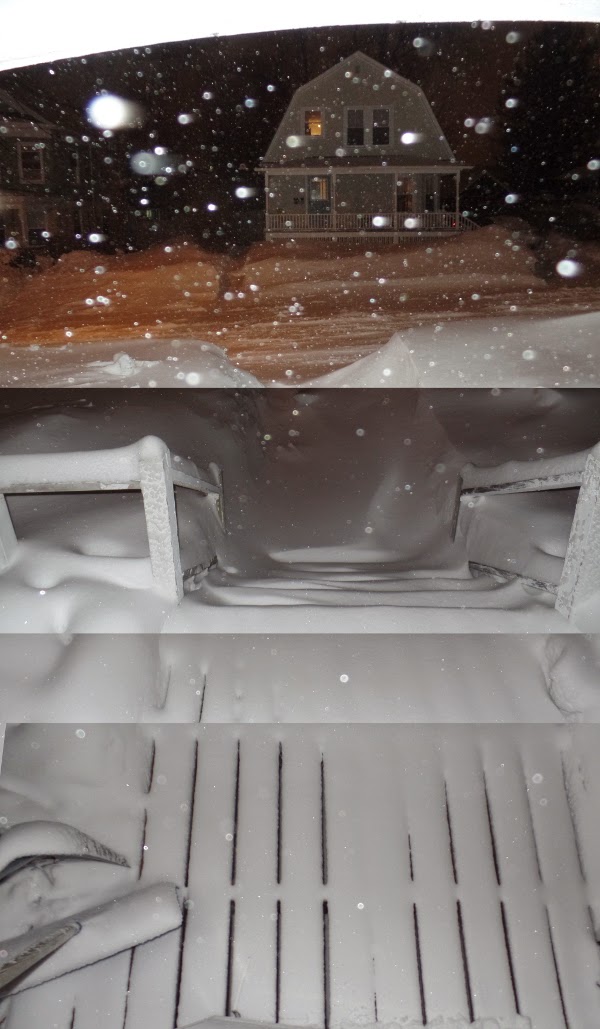 That came out even more crap than usual, which is why I'm not even bothering to display it full size, though feel free to click if you're interested.  Here's two of the more important shots (the difference in lighting between them, combined with their importance to the collage, is what makes it crap): 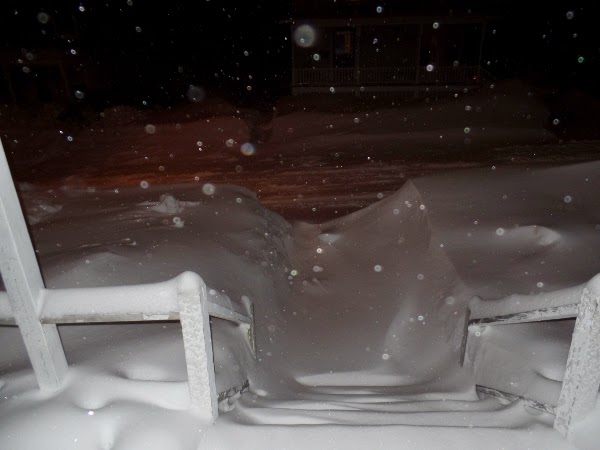 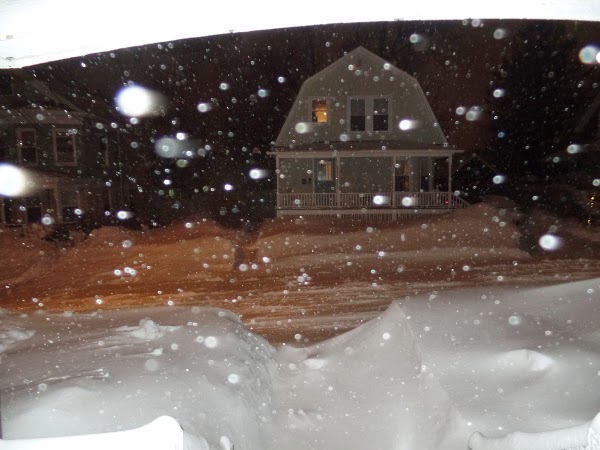 Note how the path is sort of ceasing to exist.

As the troll says, there is beauty in it, even when the temperature is 40 F and dropping. 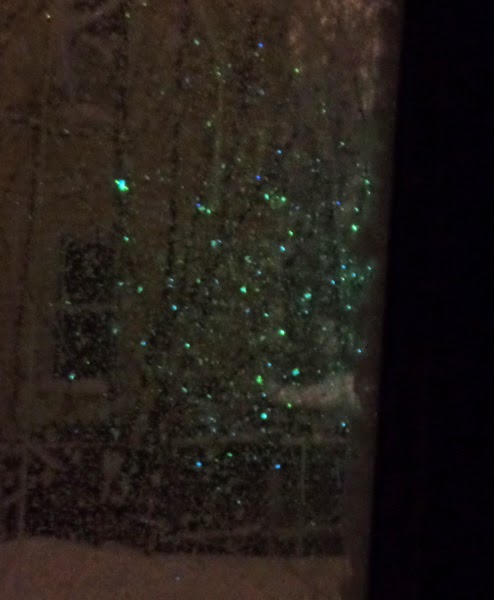 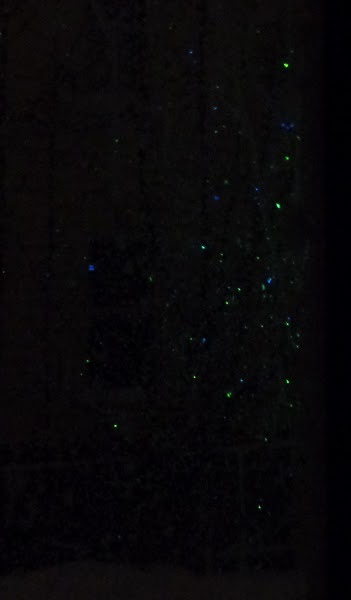 That's frost on the window of my back door responding to a dim greenish light that's two or three yards over.

Anyway, that was night, here's the next morning: 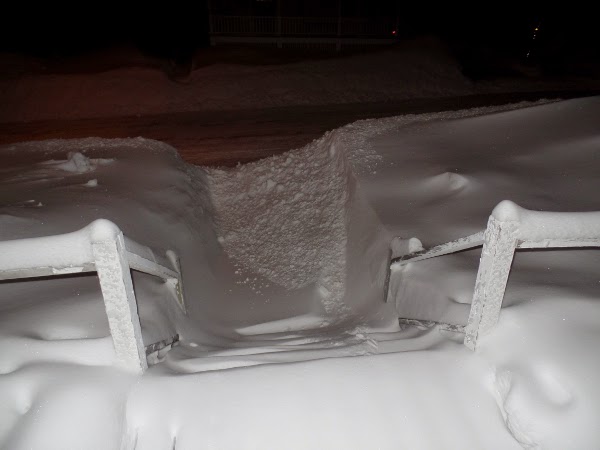 And when the sun came up I finally managed to use the camera's built in panorama function: 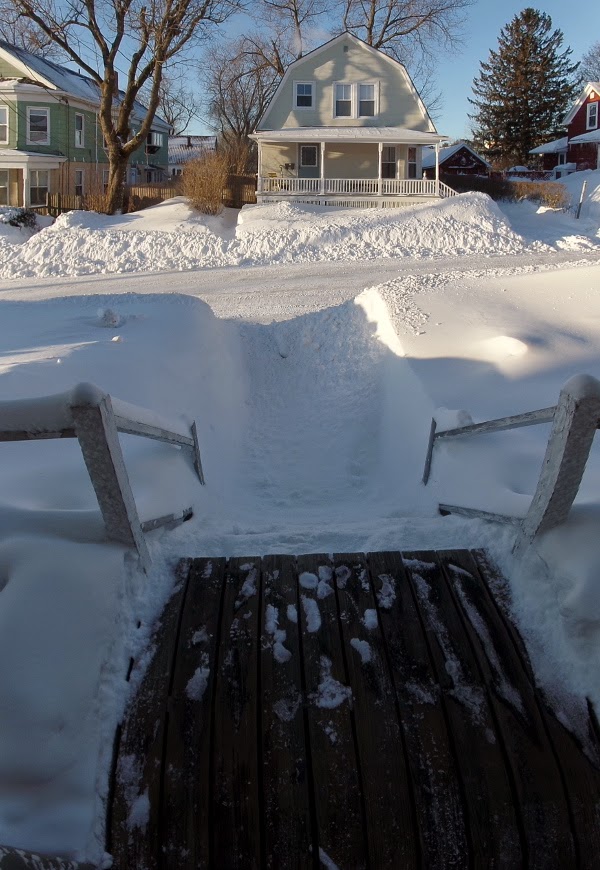 The panorama thingy working wasn't the only good news.  Overnight the temperature dropped a mere three degrees (Fahrenheit, I'm an American after all.)  This compared to dropping five degrees the previous night.

So at this point it was 37 degrees F in the house.  A full five degrees above freezing. 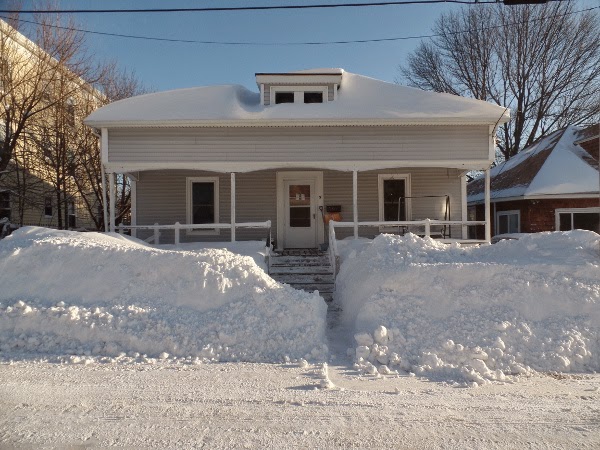 Of course to fix the whole not very warm part, I had to re-dig the path I'd spent the entire previous day digging.  Why?  Because it looked like this: 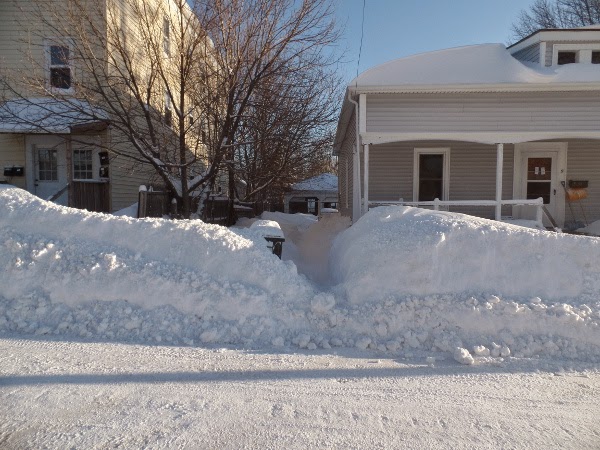 If you're having a bit of trouble picking out precisely where the clearly shoveled path is, it's not your fault.
At some point I remembered I had a camera in my pocket and took a shot looking back toward the street: 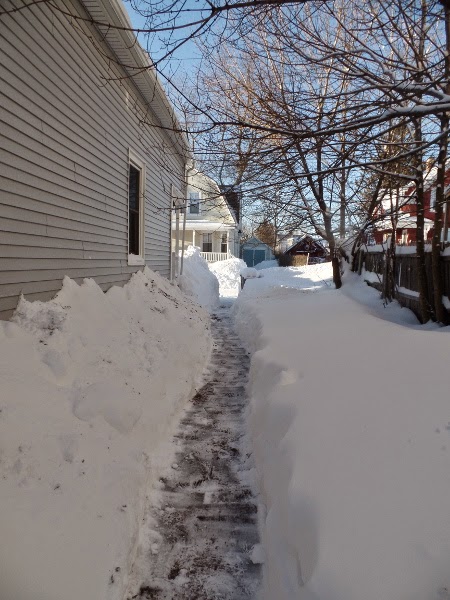 Then I turned around and took a picture of what, the day before, had been just like that: 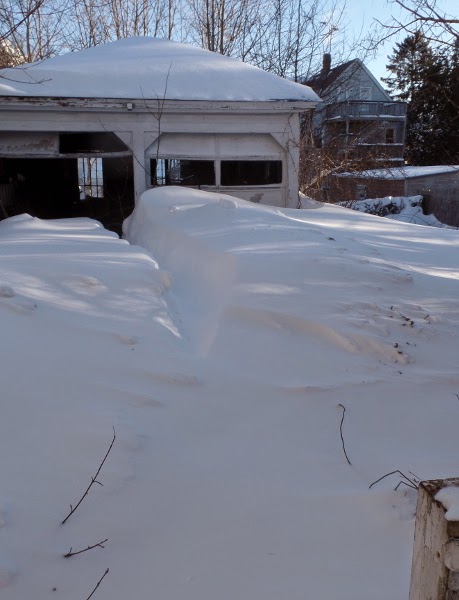 You see, for some reason the cat absolutely refused to brave the snow and so I had to dig my way to the garage and then carry her back into the house.  But after being left out all night the path to the garage became impassable.  Toward the back end you can still see that a path existed, but I defy you to chart where the near end of it is in that picture.  It was the same path I was standing on so it went from the garage all the way through the bottom of the picture, through the un-pictured low area, and under my feet.  Yet no matter how hard you look at that picture it seems to just fade out of existence before it draws near.

Anyway, when the path was finished I walked back out to the street and took a picture looking in.  If you scroll up three pictures you'll see the before, this is the after: 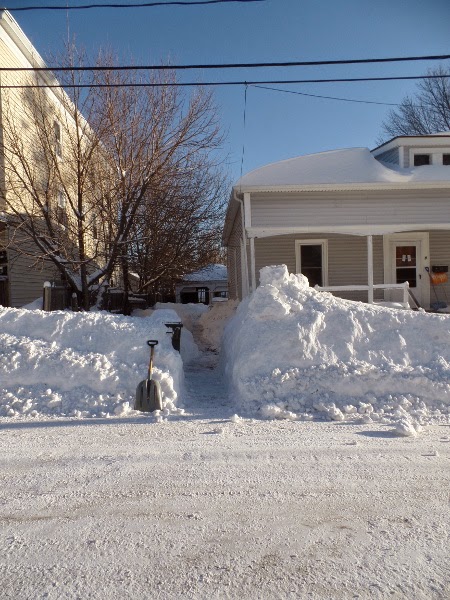 And the front of my house: 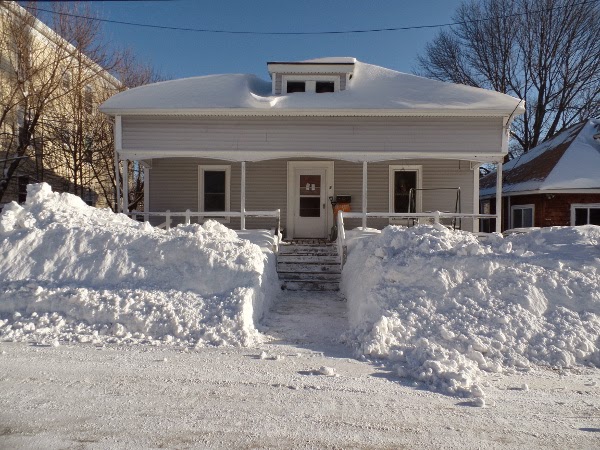 And this is the point where I say, "Shit, look at the time, I have to stop," even though I haven't gotten to the part of the story where I got heating oil yet.

So I'm going to leave you with a note that this is where we're, going, but do read the caveat afterward: 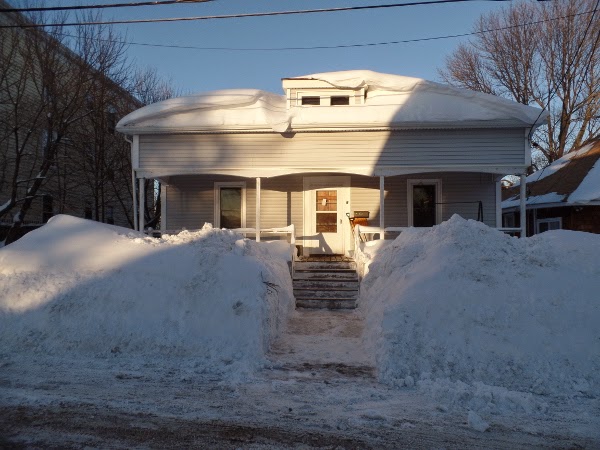 I've been slacking this year.  Normally I clear my sidewalk and the street in front of it so that, should one wish to, a member of my family could park there.

So just think about that.  Look at the snow in front of the house, imagine that it's pushed further back (so that it only covers the lawn, not that that means much to you since you don't know where the lawn is) and is thus twice as high as it is in that picture.

That's how this year's snow compares to usual.

Lots of fucking snow.
Posted by chris the cynic at 9:56 PM