Looper diagrams and a more intellegent way to end it. (Spoilers again.)

First off, even though it's going to be the second part of the post, more intelligent doesn't necessarily mean more realistic.  The main character was a drug addict in withdrawal who was never very forward thinking to begin with and had a habit of seeing murder as a solution.  Thus what happened in the movie was not at all unrealistic even if it did happen to be one of the stupider ways to accomplish the job.

Ok, so the diagrams.  Firedrake pointed to three.  The second one pointed out stands out as as the best because it accurately shows what is described by the movie including the incredible uncertainty in what the hell happened in anything not directly shown on screen:

Notice how Sara an Cyd don't even appear in the first part, that's because we have no idea what happens with them.  Notice the question marks everywhere?  Uncertainty portrayed.

Using that image as a base we can separate things out into both what did happen, and what young Joe thought would happen if he didn't kill himself.

This is what, in the last post, I called timelines two and three.  I didn't start with them because of old Joe coming back bound and such and appearing in what the chart calls the original path.  Based on the timing apparently being the same we can guess that the rainmaker was responsible for that, but based on Joe being successfully captured we know it couldn't have been like timeline 2/original path.

In Timeline 3/Altered path Young Joe kills himself (thus erasing old Joe) because he believes that if he doesn't this will happen:

In both cases though, note that in the first listed timeline "The Rainmaker" comes with a question mark. If the movie's young joe was right then it was seeing his mother killed by a looper and being left to face the world alone that led to Cyd (is that spelling right?  The Syds I know are all with "S"s not soft "C"s) to become the Rainmaker.

That doesn't happen in the version where Old Joe dies right away, so what led to him becoming the Rainmaker there?  Does some other looper fuck things up for him?  Does he kill his mother in one of his rage filled, "You're a liar! (Even though what you're saying is objectively true and I know it,)" tantrums that happened to be when she was telling him about loopers?  What?

The rainmaker had to be there because he's the reason the loopers were being killed off and thus the reason old Joe was taken.  The entire plot depends on the Rainmaker being there and having a grudge against loopers, but the only explanation we're given for how that came to be is from the other timeline.

This diagram doesn't attempt to disguise the fact that there's a hugely important part of the plot we simply do not know about.  The wired diagram is honest in its ignorance.

The film.com diagram is more screwy, and introduces best guesses while presenting them as fact:

It would make more sense if presented this way: 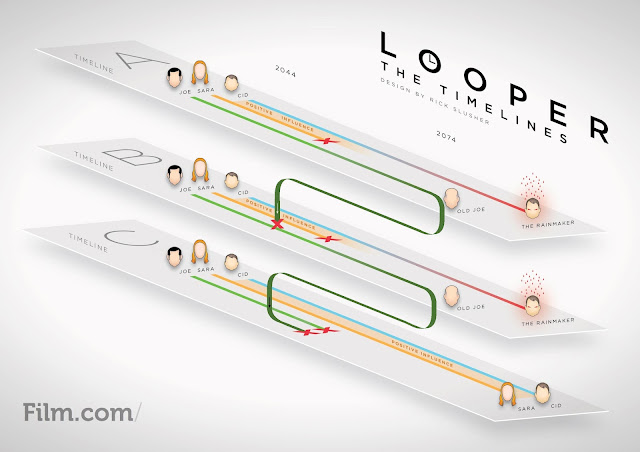 (I forgot to make note in the image that this is a version I have modified.)

But either way there's the unexplained death of Sara.  The first time Joe was sent back he died immediately.  He had no part in the death of Sara, the second time he tried and failed because young Joe stopped him via suicide.

This assumes that the death of Sara is the contributing factor to turning Cid/Cyd/[someone check the spelling on this kid] into the evil master of puns. (Rainmaker is spelled "rain"maker but, as one person puts it, it's "reign" as in "reign of terror."  If nothing else is to be learned from James Bond it's that secret agents and mass murders alike like their puns.)  Probably not a bad assumption, but what it leaves out is how the hell Sara ended up dying.  This diagram makes it seems like Sarah will just magically drop dead when Old Joe would have tried to kill her even if Old Joe is dead at the time.  Not a convincing theory.

The final diagram shared was the one from tumblr, tumblrs being what people who can't spell think are inside of locks.  I actually know of some very smart people on tumblr but the name is just begging to be made fun of.  Then again so is "blog" but I'm already on record as saying that is a bad name.  (Out of all the possible truncations of "weblog" some jerk chose that?)

Anyway, the urge to make fun of tumblr's name is probably helped along by the craptastic quality of the chart:

I defy you to come up with any (non-troll) explanation for the above that includes the person who made it actually watching the movie.  I understand that people who haven't seen movies can often have valuable insights to add to discussion of the movie, but this is one case where the person should have either watched the damn thing or shut up because the above is somewhere between pathetic and insulting.

It is a mess of the sort that requires a god on a crane to solve and anyone familiar with Euripides knows that sometimes the god on the crane just says, "Fuck you, I'm laying waste to your town.  And, for the record, you never stood a chance.  Zeus signed off on this ages ago."

Ok, so those are the three diagrams, moving on.

Injuries to the present version of a person will instantly manifest as 30 years past injuries to the version from the future.  Young Joe uses this knowledge to stop Old Joe from committing a murder by killing himself thus erasing Old Joe from existing entirely.  Suicide as the ultimate weapon.

If I were in that situation and pressed for time and thus not thinking straight I think I'd shoot off the hand with which older version of me was holding the gun.

If I had time to think there seem two options. One is that simply shouting out that I'd kill myself should have the desired effect because the person Old Joe was going to kill was someone who was in the way, not the person he wanted to kill.  Young Joe threatening suicide should Old Joe shoot Sarah should, in theory, stop Old Joe dead in his tracks not because he fears death but because it will make it impossible for him to kill the rainmaker, his intended target.

On the other hand maybe Old Joe can't be reached with just words, in which case violence to one's self does seem necessary but losing a life, or even a hand, is unnecessary.  Losing a trigger finger would be enough.

The time it would take Old Joe to readjust to shoot with a different finger would be more than enough time to try to reason with him, threaten greater damage, and prepare to make him incapable of shooting the gun.  Note that that is "and" not "or".  There should be time for all three.  Even if old Joe is completely non-responsive to reason and threats there should be time to set up plan B: lose a hand. This would make Old Joe drop the gun allowing for even more time. Time to try more reason, time to try more threats, time to try to kill him, time for whatever proved necessary.

And Young Joe does have something to try to bargain with: he thinks he know what created the rainmaker, he thinks it was this moment right here, meaning that he can offer Old Joe the solution to all his problems, and a solution that his wife would have approved of.

Maybe in the end it would have required suicide regardless.  But it didn't require it as a first attempt.

He was right that given the range and whatnot his only option (other than trying to talk, which would probably only work if the threatened only other option) would be to inflict an injury on himself that would prevent Old Joe from firing the gun.  The thing is, there are plenty of injuries lesser than death that would have done it. Suicide as a solution to stopping your future self from pulling a trigger seems going way overboard.
Posted by chris the cynic at 7:37 PM

Email ThisBlogThis!Share to TwitterShare to FacebookShare to Pinterest
Labels: I have a blog, movies