[This is part of a series of posts about the game Deus Ex, which, for the record, I recommend buying.]

We've finished training, and that dumps us back at the main menu, so lets take a look at that: 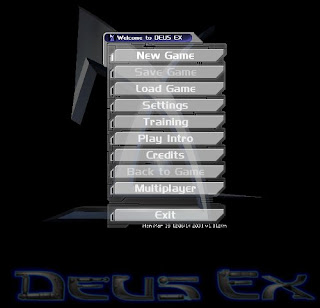 We've got a spinning logo in the background an a list of options.  It should come as no surprise that I like the second on the list "Save Game", Deus Ex also has a quicksave feature.  I didn't actually use quicksave for the "rewind"s two posts ago, I used ordinary saving.  But you can kind of see why I like saving.  I can go back and do that in six very different ways.  And I can keep on going back.  If I want to, right now, I can go right back to that moment and try my hand at that bot again.  The only way I get that in Mirror's Edge is if a true checkpoint (not a subcheckpoint) is exactly where I want it.

Anyway, what we want for now is new game, which will bring us to difficulty selection.  (Only difference made is how much damage you take) and then character creation.

You see the character you play has the code name J.C. Denton, and the default real name for him?  JC Denton.  Which means that if you use the defaults, and I do, things get very screwy any time code name and real name are mentioned anywhere near each other.

You will seriously end up with, and I'm not making this up:

"JC Denton will be joining us today [...] His assigned cover name for the duration of his service will be "J.C. Denton""

"J.C. Denton or "JC" or whatever he calls himself"

Which leaves one with the strange impression that the entire world is downright obsessed with whether or not one uses periods to separate initials.

I think this was a mistake.  I think there should have been a default real name that was not the same as the code name.  I assume the reason that there wasn't was to avoid pushing one real name, and to avoid confusion for the people who didn't pay attention and wouldn't have known that Default Real Name referred to them.

I think that could have been dealt with.  The field could have been left blank initially and then, if not filled in, had the Default Real Name applied.  That would avoid pushing anything.  To notify people, "Hey, this is your name," there would be multiple possibilities.  One would just be to have a pop up saying, "Since you didn't choose a real name your real name is [Default Real Name]" or, since they'd know what the default real name was ahead of time, the could have actually recorded lines to let you know what it was, which would only play if you left it unchanged.

Before I get to that, I'm going to propose such a name.  I think Adam Smith would have worked.  It's generic in its elements, neither Adam nor Smith stand out as remarkable for an American to be called, but in combination it gives the sort of vibe one might like for a conspiracy game.

Don't use that myself, I stick with defaults and enter a world where everyone is obsessed with whether or not periods are used to separate initials, but I think it would have worked as a way to avoid the silliness of "J.C. 'JC' Denton."

And if it were done, then you could have a check to see if it was changed, and if not set a flag that would change a couple of conversations, "Hey Adam-  I mean J.C., I might as well start using your codename."

Morpheus could have started by listing both code name and real name.

And, after that, anyone who still didn't know that the "Adam Smith" from the text files was the player character really brought it on themselves.

So that's my, if the player character is going to have two different names have them, by default, be different rant.

Here's why he has the two different names in the first place:

It was made of people who had strong ideas of what was important that didn't always agree with what other people on the team thought was important.  Deus Ex is a series of compromises.

Some people thought that it was vitally important that the player get to chose their own name.  They are and speak on behalf of a type of gamer I am not and do not even understand.  People like me only know that this is an important thing if people like them are telling us because to us it isn't important.  I stick with the default, as noted above.

I don't care about customizing a character.  Other people do.

So on the one side we had the people who do care about that, and on the other side we had people saying, "We can't tell the story we want to tell if no one ever says his name.  People need to be able to address this guy, and we can't record that dialog unless the name is set in stone ahead of time.

Was it the best compromise ever?  Probably not.  Does it make sense when his brother is in pain and calls out his code name rather than real name?  Only if UNATCO has really impressive conditioning.  But it's what worked.

My only objection is that by default they made them the same.  If they'd made them different, say my suggestion of Adam Smith, the excerpts above would look like this by default:

"Adam Smith will be joining us today [...] His assigned cover name for the duration of his service will be "J.C. Denton""

"J.C. Denton or "Adam" or whatever he calls himself"

Which leads to an impression of a more reasonable, less punctuation obsessed, world.

In addition to real name you can also choose the player's appearance, and honestly I'm just going to skip that for now because I'm having trouble with pictures and I'm not good at description.  You have five options which cover a limited range of skin and hair color.

Also worth noting that the original plan was for JC Denton to be able to be a female character.  That was dropped.  The remnants of that are one bit of concept art and the fact that the character is identified in code as JCDentonMale, which only makes sense if there might have been some other form of JC Denton that wasn't male.  The name JC was chosen in part because it could be a male or female name.

(So Adam Smith might not be the ideal default real name after all, if we imagine a world in which JCDentonFemale was still an option.)

You also have a some skill points (5000) that you can assign right off the bat.  The pistols skill is set to trained by default but it isn't locked in yet, so you can drop it down to untrained to gain additional points to work with.  Depending on your perspective, fortunately or unfortunately a bug will kick the skill back up to trained regardless, so it becomes less legitimate trade-off and more exploit.

But before I get into that I want to talk about the descriptions, you can read them all here.*  There are four levels of every skill, untrained, trained, advanced, master.  Trained and advanced have exactly what you'd expect (agent is a bit better, agent is moderately better) but master always has this over the top description which I find delightful.

And so it makes it so that the gap between untrained and master, in terms of description, is huge and it seriously feels like if there were a sword fighting skill the description would be Untrained: An agent knows which end to hold.  Master: An agent can take on the Dread Pirate Roberts left handed.

Swimming
UNTRAINED: An agent can swim normally.
MASTER: An agent moves like a dolphin underwater.

The first thing about skills is that skillpoints are a limited resource.  You can be some of the things above, but you can't be all of them.  And once you've upgraded a skill, actually upgraded it as opposed to just looked at where you'd stand if you did but not actually gone through with the purchase, there's no going back.

That's part of how Deus Ex works.  Save all you want to try it a thousand different ways, but in the course of a single playthrough when you make a decision you have to live with it.  What you choose to do will open some doors and close others, and will change your options going forward.

Another thing that the skillpoints can show us about Deus Ex is that there's the option to concentrate or go for coverage.  You can start the game as a master of one skill (it would have to be one of the cheapest skills) or you could start with as many as six things trained, but nothing advanced.

But you can't go both ways at once.  You can't have everything.

And this extends beyond skills.  You can spread things out, you can concentrate resources, but you can't have everything.

In certain cases skills, items and augmentations will all address the same things, and this again presents you with the option of coverage or concentration.  You can use skills to address one set of things and augmentations and items to address another, or you can choose to put them to work on the same thing thus allowing you to do one thing really well while leaving other areas not well covered.

You've got choices all over.

Things like skills are at the heart of an important part of Deus Ex, that being resource management.  You can't escape it in Deus Ex.  If you choose to ignore the resource management elements, you're trading the time spent on those for extra difficulty for yourself in the game.  You're managing resources.

Anyway, once you've chosen your skills, you move on to the intro movie, which we'll cover next time.

* You may notice, if you poke around on that site, that I've had involvement with that site.  Writing some articles for it, partnering with the guy running it.  One of the things on my list of things to do when less depressed and more able to branch beyond where I am now is to get back in contact with him.  We were friends, be nice to be that again.  Right now though, I don't have the energy to reach out.

There's a whole bunch of people I ought to reach out to.  Ought to have reached out to ages ago.

[Previous][Index][Next]
Posted by chris the cynic at 8:44 PM

Email ThisBlogThis!Share to TwitterShare to FacebookShare to Pinterest
Labels: Deus Ex, games, I have a blog, Slow Reading