I've been convention-adjacent before, but never to one.

I saw the armored dog.  I saw Rey waiting to get her picture taken.  I saw Kylo Ren from a distance but he's boring and I didn't care.

I learned about using tarot cards to help you overcome artistic blocks in your writing.  I got a Rogue One: A Star Wars Story poster which I carried around all day with only "Rebellions are built on Hope" visible making me think of various other, better, foundations on which to build rebellions.  Only at the end of the day did "Some walls are made of fear; some are made of wall material" pop into my head and I haven't quite figured out how it goes.  Maybe, "Some rebellions are built on hope; some are built on rebellious acts," but that doesn't quite capture it.

Now I was good and respectful and quiet when presenters were speaking all of the time before and after that, but at that point I broke my silence, turned to the person beside me (whom I did not know) and said that it could be a good story if it were in a war zone with aliens.  Her friend on the other side said that she was thinking a killer clown on the loose could make it a good story, and then the question of what other factions might want that soup came up, and the note I ended up writing in my notebook was (word for word, punctuation mark for punctuation mark):


Random observation: everyone in this room
has come up with a kick ass awesome story
that follows the plot:

Is the hard part getting the money?  Getting to the corner store?  Buying the soup?  Is there rationing?  Danger?  High stakes negotiation?  Space monkeys?  A horrible natural disaster?  (Add "during a Tornado" and I think you've just come up with the next SeeFee original movie: Soup Run: Skies of Terror.)

Is the corner store being robbed when Agent Coulson arrives intent on buying soup?

Who knows?  But what everyone does know is that you can make an interesting story out of the journey to the corner store to buy soup.

I heard that one time Conan went to the store to buy soup as part of a coming of age ritual and he returned not only with the egg in his mouth unbroken, but with the decapitated heads of an entire band of marauders.  Plus Cambell's chicken noodle, of course.

I didn't have much time at Arisia, didn't see what wares were being peddled, but it seemed a nice enough place.

And we're all waiting for the next breakout novel about getting soup at the corner store.

Reviewing the pictures one, fact is beyond any doubt: my camera is fucked up severely.  I mean I knew I had to smack the fucking thing to stop it from randomly cycling modes long enough to take the pictures, and I knew the built in lens cap didn't open all the way bar jostling, but this is someone graciously standing quite still so I can photo, and the blurring is severe enough that the color from her irises bleeds into the color of her hair (it's worse at full resolution)

So, that kind of sucks. 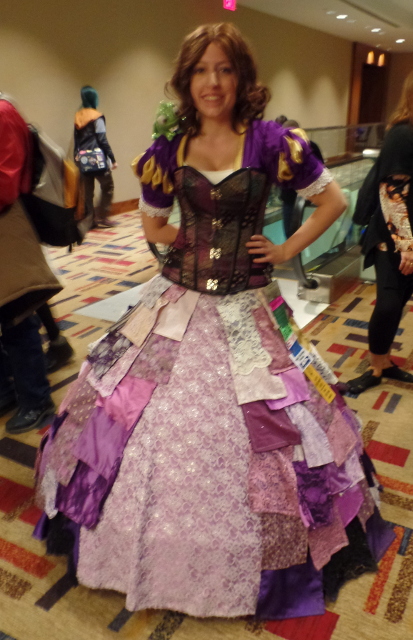