The Sierpinski triangle and the structure of Life After

This is the Sierpinski triangle: 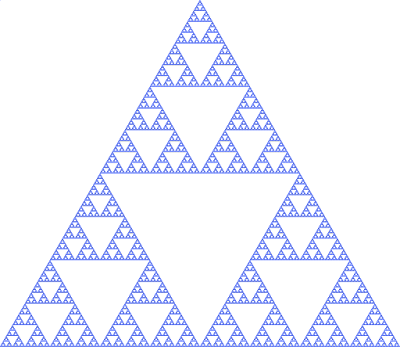 It's a fractal and can be generated thus:

You just go on forever because, you know, fractal.

For our purposes only the first three or four matter, depending on what we consider the smallest unit.  After I realized how this applied to the structure of Life After it made me feel kind of stupid for not noticing it sooner.  In my defense, though, it was backwards.  So it's not like I was looking at:

And failing to catch the pattern.  In my prosecution, though, repeatedly looking at (27), 9, 3, 1 and trying to figure out how to explain that without realizing --until I drew a diagram (actually it was the second diagram)-- that it corresponded to the Sierpinski triangle is still pretty bad.

We can look at Life After from the top down in which case it consists of three thingys (motion, counter motion, climax) and a distant epilogue.  The thing is that the thingys are on accelerating pace.  Each one only takes up third of the length of the one before it.

On the other hand we can look at it from the bottom up.  In the original conception the chapter was the basic unit of Life After.  So it would be Chapter 1, 2, 3, 4, 5, ...  At that point the story didn't really have a structure, there were some glaring problems, and it was all a bit slapdash.

So, in the new conception the chapter is still the smallest unit, but the basic unit is something consisting of three chapters that, for lack of a better word, I'm calling a "part".  Parts are numbered in Roman numerals so they don't get confused with chapters (westernized Arabic numerals) and thus it'll be I-1, I-2, I-3, II-1, II-2, ...

Chapters never number higher than three, the number of parts goes on until the story runs out.

Parts can then be grouped by threes as well, so ... um, call such grouping "sections".  If one does this, though, the last section, though, is degenerate because the number of parts isn't divisible by three.

And that's when we get to the overall structure.

The first three sections make up the motion, the next section is the counter motion, the one part-long thing that remains (1/3 of a section) is the climax.  And then the distant epilogue is one chapter long.

It's easy enough to understand that each new bit is a factor of three less long than the previous one.  It was harder, for me at least, to see what was being formed.  Like I said, it took two diagrams.

Anyway, the structure if we look at the chapter level (i.e. every black triangle represents a chapter):

And for those who didn't understand a damned thing I said above, or just need a visual aid, pretty colors:

There's an interesting feature of this kind of structure.  If you ignore size and just go with the rule that a triangle is a triangle then you can actually show the entire thing in a single triangle: 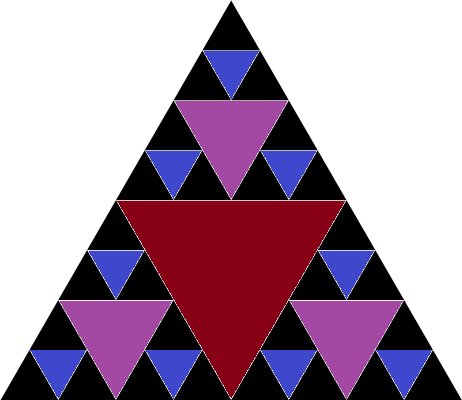 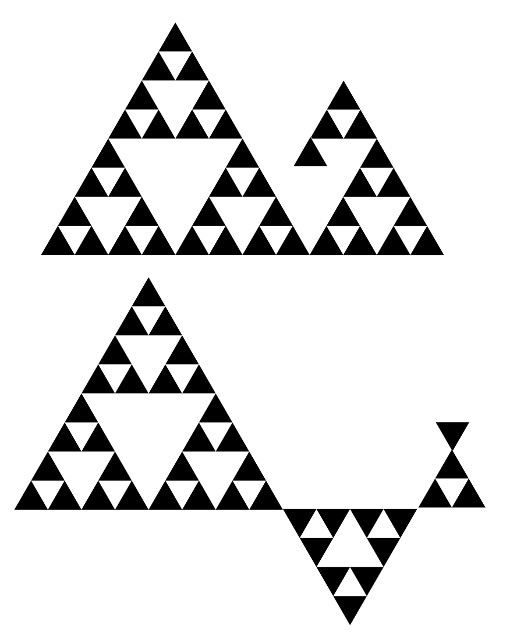 Of course this is mostly looking in more detail than I originally was since, as I said, the part is the basic unit.  Sure, that leaves the epilogue out of consideration, but it also simplifies thing.

Probably no one cares about any of this, but it really helped me figure out where things stood on a meta level.

It's also significant because it ties into the the importance of numbers such as three and nine in Norse mythology.

One of the things I worked out in pen on paper when I couldn't sustain screen time.
Posted by chris the cynic at 7:00 PM

Email ThisBlogThis!Share to TwitterShare to FacebookShare to Pinterest
Labels: Life After, meta