Exitement and disappointment in the new tiny Rubik's cubes (images)

When I saw it at a store in a mall in Massachusetts I was surprised and excited, they hadn't made these since the '80s and the company that had made them was no longer operating. 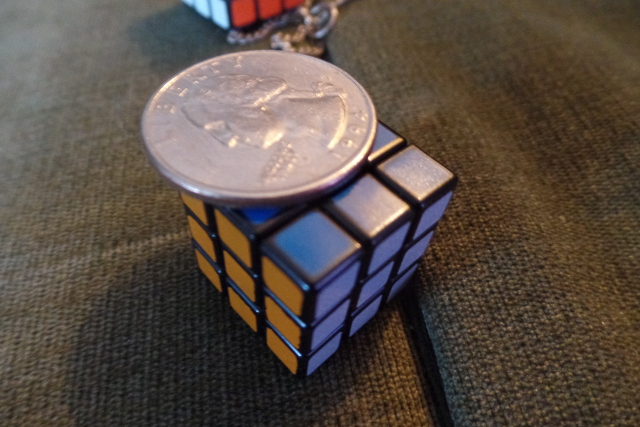 It's not uncomon to see tiny cubes in coin machines, but those things are utter crap.

[Added] I just looked up to see what the old ones are selling for now --14 to 18 dollars, it's a good buy, not because the value will go up, though be aware that the originally sold for 99 cents, but for the quality (assuming they haven't been damaged, I bought one once that looked fine on the outside but had somehow been absolutely crushed inside, it flew apart in my hands)-- and came up with a surprise.

The name "Wonderful Puzzler" is going to be introduced because it's what I thought my old tiny cube was.  It's not.  I remember the packaging it came in and seeing a picture of that packaging in an ebay listing came with a surprise.

I didn't even know that the actual Rubik's brand made cubes in that size back then.  So, every time I say "Wonderful Puzzler" for the necklace cube in the rest of the post, I was wrong. [/added]

Wonderful Puzzler (Mr. Rubik was from Hungary, then a Soviet satellite state, we respected their patent claims not in the least, tons of companies made their own version) may have been a clone making idea stealing company, but they were also a quality company.  Their cubes were good and so were their mini-cubes.  The 19 millimeter ones were often sold as earrings or necklaces but they were never purely ornamental nor were they mere gimmicks.  They were good solid puzzles that worked just the same as the big ones because they were the big ones, scaled down to the 1/3rd length, width, and height.

Which is to say that they were a fully functional, quality, Rubik's cube that was smaller than two millimeters cubed. 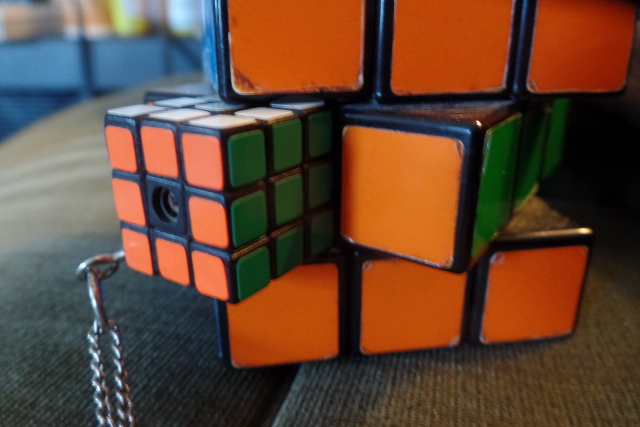 Yes, I lost a sticker.  One of my favorite color even.  The thing could very well be older than I am, it's kind of impressive that the other 53 stickers still stay on so well.

Anyway, the point here is, you know it's the same size because of how well it fits between the top and bottom layer.  If I popped out a corner cube and put that in its place you'd see that if fit perfectly there too.  It would have to be a corner because the centers and edges have cutouts that are used to keep the cube from falling apart.  (If you've ever wondered about the mechanism you could google it or I could do a post sometime.)

Before we get on to other things, here's the modern tiny cube joining the family: 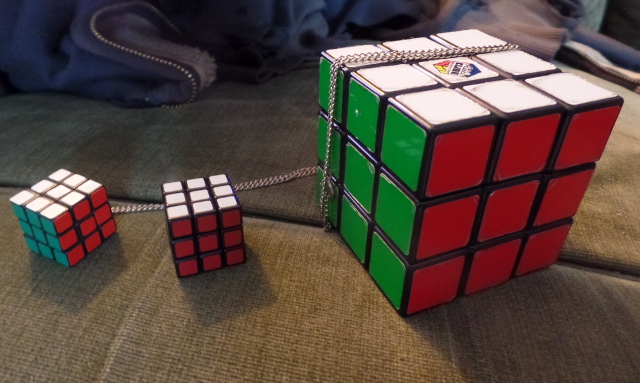 I had meant for them all to be showing the same colors but I guess I angled the new one wrong.  An interesting thing to note, which you can't see from this side, is that the regular sized cube and modern tiny one, which is an official Rubik's cube, have the same color scheme as the Wonderful Puzzler necklace cube.

Modern Rubik's cubes are made with clone style coloring.

Anyway, here's just the little ones: 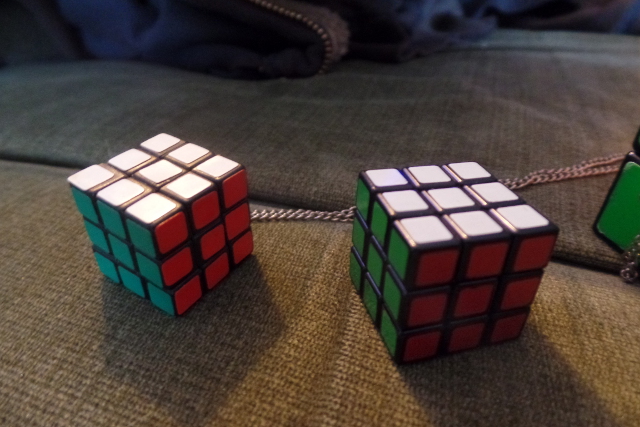 Here's a look at the size difference: 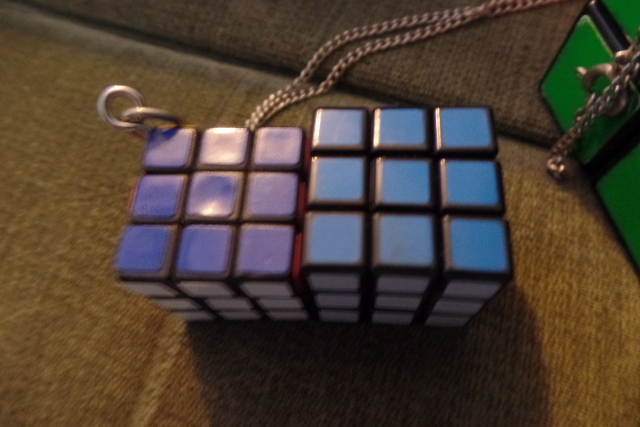 Sorry it's a bit blurry/hazy, I realized way too late that I should have been using macro mode instead of trusting automatic to choose macro mode which sometimes works and sometimes...

I noticed the difference because of this: 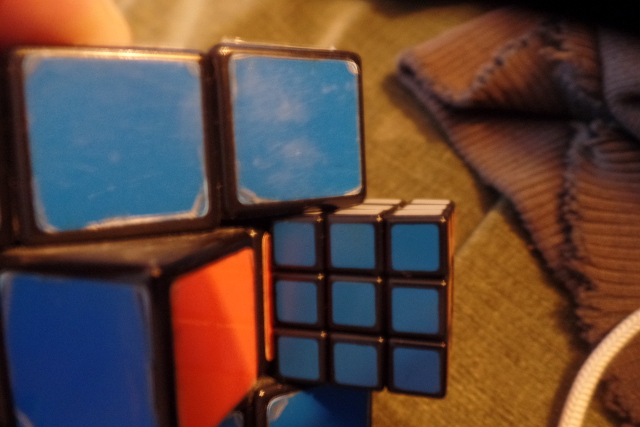 It's not huge.  But it is enough that they don't fit right.  You've got to shove a bit to make it happen, the upper blue cubie of the normal cube is noticeably pushed out of place by the size of the small one.

I looked at that for a bit and concluded it was two millimeters larger clocking in at 21 millimeters.

Eventually I found the calipers and the confirmed it.

It's still nice to have the little cubes in production, and there are still a lot of things that can be done with them, but it's disappointing that the size is off what I was expecting by those two millimeters.

If I want to make a 9x9x9 cube that's exactly the same size as a traditional cube, for example, it can't use the new little cubes for parts.  Making a cube where parts of it move as a 3x3x3 and parts of it move as a 9x9x9 is likewise not going to be had via combining part sizes of the two new standards.
Posted by chris the cynic at 6:00 PM