My mental image of a toadstool person

Ana Mardoll has been reposting her original Narnia posts for reasons, reasons which are good but I am not good at summarizing so we'll just leave it at the fact she's been doing it.

The most recent one gave me opportunity to repost my fic fragment "Work Against the Emperor's Magic?" which is in a too close to call tie with another fic in the "What if Aslan took Susan seriously?" genre (Susan, Aslan, Peter, and the leaving of Narnia at the end of Prince Caspian) as my most popular Narnia fic by far.  Those two leave all the others in the dust.  Which means that getting an opportunity to repost one of them is sort of like a ticket to free praise and validation.

Praise and validation is always important, but it's extra important when I'm feeling useless.

So initially that's exactly what I did, I posted in the new thread a popular fic that I'd originally written in the old thread.  (You'll have to excuse the mess of the comments in the old thread if you read it; disqus is evil.  It was totally legible before things were "improved".  Mind you, as I recall, attempts to cope with the "improvement" made things even worse.)

But something else happened both times I read the actual post, and this time I decided to write about that as well.  You see there's a reference to "the people of the Toadstools" and, well ...

Context over, time for actual text (copied word for word from the original because: who needs editing?)

This post has once again sent me searching for an image that I swear I've seen but may have just been the result of deja vuing a description.

The image is drawn from a low height so that an ordinary toadstool looks taller than a human being. This will be important because the toadstool person, when we get there next paragraph, looks as tall as a person until you take into account that they're shorter than the toadstool. Before we get to them, the toadstool is on a forest floor and that kind of plays into the lighting that's doing that thing with light through leaves that I'm told is called "komorebi" in Japanese but has no English word to describe it.

A human-esque creature is partially obscured by the previously mentioned ordinary toadstool. Its skin is smooth, so smooth it has a sheen, almost like, say, an orange mushroom* though if memory serves the skin was grayish. Its left hand is on the toadstool as it steps out around it, its right hand really shows you why the thing is scary. Its whole body is thin or elongated (depending on how you want to look at it) but it really, really shows with the long outstretched fingers of the right hand which end in sharp looking points.

I don't think it had any hair.

And thus when I read this:

Although I am not, generally a particularly visual person, particularly when I read, the toadstool people are one thing that I do have a longstanding image of.

This is of a gender-unknown humanoid peering around a toadstool in a dark forest - the toadstool is oddly undefined, but I don't think it's red with white spots.

This creature is lithe and sort of stretched, with long pointed fingernails that look quite threatening. It has skin a bit darker than olive, and dark dark eyes, and is about ten/fifteen centimetres tall, although this image is seen as if the viewer is that height as well, or maybe a little taller. I always imagined it as sort of "sleazing", if that counts as a verb, from place to place, and of having very, very smooth skin - almost as if it is slimy, although it is not wet. Maybe a little damp. It watches. Always watches, with those big, dark blank eyes peering around things.

I suppose "The Toadstool People" got very associated with mold and decay in my head, in a way that "The Mushroom People" certainly wouldn't.

in the original thread my reaction was, "I've seen that picture," and then I tried to find said picture.

But like I said, that reaction might well have been deja vu, so the picture I've described may not even exist.

[Added:] Oh, for fuck's sake disqus. If I wanted you to imbed the image I wouldn't have fucking linked to it. Fine. It'll be a footnote: 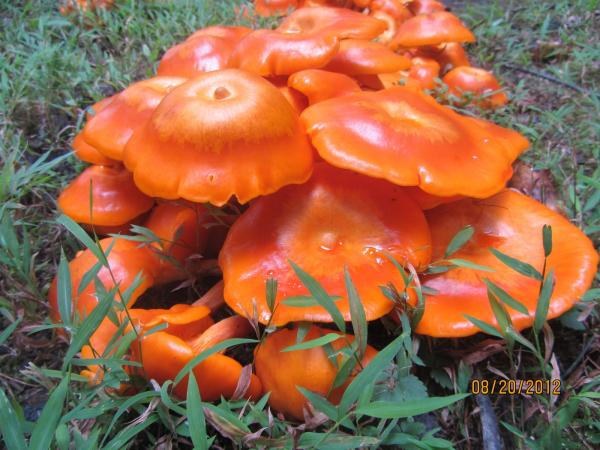 Hardly the most inspiring thing in the history of the world, but now you know my visual image of a toadstool person.  When they show up in Life After, assuming I ever get that far, that's the image I'll be drawing on.  Though in Life After they're really human sized, and go nicely with the giant mushrooms that dominate the landscape.
Posted by chris the cynic at 9:18 PM