The challange was to write a story about a fusion of Ron and Shego created by DNAmy using her genetic zipper.  Her what?  Well it's a machine with three chambers.  Put a cat in the right one, a snake in the left one, and you get a cat-snake in the middle chamber (and empty side chambers.)  She also made a bunny-rhino, a chicken-man, a pig-man, and a naked mole man.

I'm putting an, unfortunately low quality, picture of what the genetic zipper looks like when operating normally at the bottom of the page.

Do note that even on the challenge page I described what follows as a quick and rough beginning.

"Kidnapping is pretty low, Amy," Kim said. "I thought you were a nice villain."

"Don't be absurd, fellow cuddler," Amy said, cheerful as ever. "I've always taken meanies and made them better. Stevie didn't volunteer to to become half molerat, you know?"

Kim didn't even notice what she was saying, in one chamber was the person she came for --Ron was conscious but strapped down and unable to do anything-- and in the other chamber of the genetic zipper, where Kim had expected to see an animal, was another person --an unconscious woman with dark hair and light skin it was hard to make much more out through the chamber's window, but it kind of looked like...

"Of course it is dearie," Amy said.

"Time out," Kim said. "Time for a villainous monologue. Why would you want to combine Ron and Shego?"

"I suppose I could tell you," Amy said, though her voice was clearly uncertain.

"Well, it all started when I recovered Monty from those nasty ninjas," Amy said. "I tried everything to turn him back to my flesh and blood Monty but eventually I was forced to admit that no power on earth could free him from the curse of the Yono.

"Now there are only so many powers available that aren't from earth," Amy said.

"Exactly," Amy said. "You've always been a smart one, but then you'd have to be to be a cuddler like me."

"But why Ron and Shego?" Kim asked.

"I need to test the process," Amy said. "I can't try it on my Monty until all of the little bugs are worked out. I've never combined mystical monkey power with comet power before. And obviously I had to use Shego because if one of the heroes on Team Go disappeared then the others would be on their guard. Once I have the data from my newest creation I'll be ready to save my Monty."

It did make a twisted sort of sense, Kim had to admit. Well most of it did, at any rate.

"How did you even capture Shego?" Kim asked.

"Oh that was easy," Amy said. "I just drugged her drink.

"I think that covers everything," Amy said, "and this has been a nice chat --do feel free to drop by over tea if you'd like another-- so it's time for my test. Toodles."

Amy pushed the lever into the "on" position and things went very, very wrong. In addition to the arcing electricity that meant her equipment clearly wasn't up to code, a blue glow emanated from Ron's chamber while Shego's seemed to burst into green flames. Things started to explode on both sides. Amy started screaming.

The glow and the fire combined into a sort of cyan smolder that covered all three chambers of the genetic zipper.

Kim vaguely noticed when Amy shouted at the melted remains of a bank of computers, "My data is gone!" and was happy to be rid of Amy when she shouted, "My beautiful lair is collapsing!" and ran.

But Kim didn't know what she could do. The equipment was fried. If the two had been combined there was no way to split them again right now. She just had to watch the smoldering cyan chambers and wait to see what came out.

The central chamber opened, an almost-white green hand grabbed one of the chambers "teeth" and Kim's heart dropped. They'd been combined.

A woman stumbled into view. She had Shego's colors. Green hair so dark it looked black, green skin so light it looked white. But there was Ron there too. The freckles had become darker green skin instead of brown, the eyes were somewhere between Ron and Shego's color, a sort of yellowish brown, the hair was Shego's length but it was messy in an "essential Ronness" way. She was wearing Ron's jersey and a black and green skirt of Shego's.

After a long moment of Kim and this new woman just looking at each other as bits of the lair collapsed around them, the woman spoke:

"So, Princess, we still on for Bueno Nacho tonight?"

The genetic zipper, as it usually opperates: 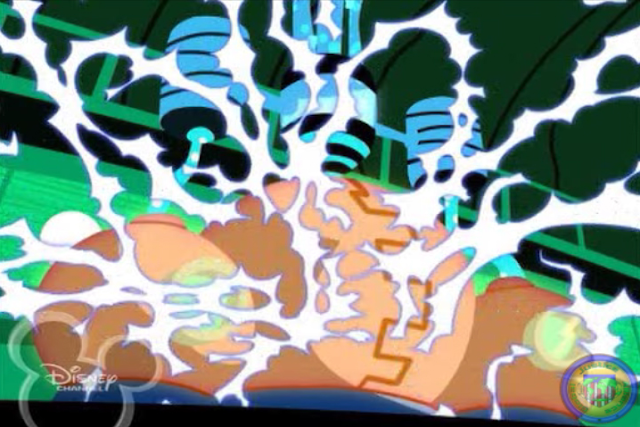