[This popped into my head the first time I saw Nausicaa Of The Valley Of The Wind; no idea why it took so long to write up.]

Alaric heard voices, which surprised him because he thought he was the only one in these secret underground chambers.  He followed them, hobbling with the help of a walking stick, and eventually was able to hear sword master Oba ask:

"You did all of this on your own?"

Princess Iphthime responded, "Yes."  Then she said something too quiet for Alaric to hear.  He kept walking toward the voices and heard, "But it's too late now, I'm shutting down."

Alaric walked through an open door and saw a garden more amazing than anything he could have imagined.  Lights were set up to let the plants grow underground, the water system was ingenious, and the plants themselves were things he'd only heard stories of.

"I've already cut off the water," Iphthime said.  "Soon these plants will wither and die."

Iphthime sniffled and it looked to Alaric as though she were about to burst into tears.

Alaric said, "Turn the water back on," without even thinking about it.

Iphthime and Oba turned to face him.

"I'll watch your garden until you get back," he said.

"I don't even know if I'm coming back," Iphthime said.  Made sense, she was to be one of the hostages taken by the conquerors.

"Then I'll watch it for a good long time," Alaric said.  "I can't show my face above ground, and I definitely couldn't make it to my own country, so I could use something to do."  Iphthime smiled.  "Besides, I owe you for saving me, giving me food, medicine, a place to stay, and clothes." Alaric gestured to the dress he was wearing.  One of Iphthime's own, if he understood correctly.

"I hope it gives you something to look forward to," Alaric said.  "Getting back to all this."  He gestured to the garden.

[And then much later in the story I see this scene:]

A guard collapsed to the floor and from the darkness behind him Iphthime saw a familiar face.  She would have shouted, "Sword Master Oba!" but the fear of alerting other guards forced her to muffle her enthusiasm.

When the two made their way to the exit they joined a third person who had been acting as lookout.

"Prince Alaric!?" Iphthime said when she saw his face.

"Of course not," Alaric said.  "Alaric is the fugitive ruler of a conquered nation who would be arrested on sight.  Sword Master's apprentice Alara, at your service," Alara bowed.

"I guess you liked my dresses," Iphthime said.

"I did indeed," Alara said.  "And don't worry about your garden; I always make sure I have time to check on it."

With the conversation over, Oba led the two away.

[Added:]
Random notes:
Alaric is initially in Iphthime's clothes simply because they're what's available and the occupiers might think it weird for the locals start bringing male clothes into the "There's totally not a guy here" place.  Obviously it works out for the best.

Iphthime is the sister of Penelope from the Odyssey and really the coolest female name from that work I could find other than Nausicaa.

Oba comes from nowhere in particular, and it's not surprising that I couldn't find a name as cool as Yupa.

Alaric just sort of came to me.

In Nausicaa a princess was rescued but she died soon after and thus had no reason to be hidden in the secret underground rooms where Nausicaa keeps her garden.  As such ... no idea where the idea above came from.

Nausicaa's garden is, by the way, a form of awesomeness through SCIENCE!  On her own, in private, she'd done more work to understand the Toxic Jungle that threatens the world than anyone else has in a thousand years.  Some of that is because she has the good fortune to live somewhere Jungle adjacent but not Jungle threatened (thus samples are no problem, nor is her lab at risk of becoming a death trap) but a lot of it is that she's willing to do the hard, sciencey work.  And that's awesome.

If I ever figure out the story surrounding my three characters, I want their garden to have a similar dynamic going on.

I thought it might be a good idea to share the garden that inspired this.  Since Blu Ray is allergic to screengrabs, this is my camera taking a picture of my computer screen: 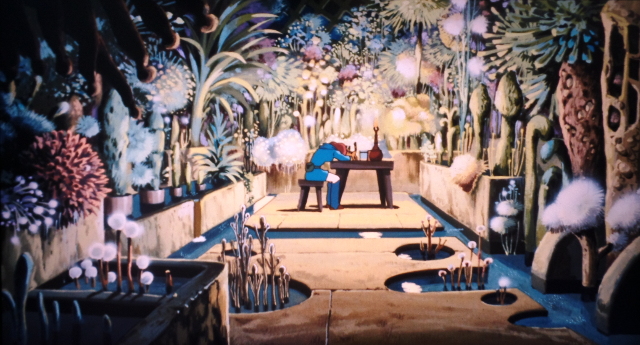 Email ThisBlogThis!Share to TwitterShare to FacebookShare to Pinterest
Labels: Original