[Originally posted at Fimfiction.net]
[Know how I usually say that things will make sense without prior knowledge of the source material?  Doubt that applies here.  Notes at the end.] 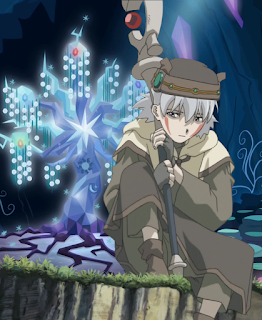 Once upon a time my name was Celestabellebethabelle[1] and I lived on earth[2]. I was ⹁you see, once a human like you,[3] but (as you might imagine) I went to a convention. "Which convention?" I hear you ask.[4] Anime Boston. Knowing me,[5] you'd have thought it was Arisia, but it was Anime Boston. Things never work out quite the way you'd expect.[6]

So, try as I might ⹁with magnetsˌ superconductorsˌ liquid nitrogenˌ and so forth, I could not get the floating ball in my Tsukasa[7] staff to actually ⹁you know, float. Now, I could have just used a wire or ⹁I shudder to think, a metal rod, but that's entirely missing the point.

So I had the rest of my outfit, right? I mean, you know this story even if you've tried not hear it;[8] you know all about how my outfit was awesome. Those green stones inset in the hat? Malachite.[9] Nailed it. Where applicable[10] I used the actual skin of actual animals because suede is awesome my outfit had to perfect, ya know?

Get to the convention ⹁I'm all alone, and Jen A. Blue doesn't do panels anymore so the thing that originally made me decide I had to come to Anime Boston[11] isn't even there anymore. I have no idea what to do. Been trying for years to get here, finally arrive after the thing I was coming for is gone.

So I wonder and I wander and I find a disreputable looking person selling just the sort of thing I want to illicitly buy. By which ⹁of course, I mean that wave master staff with the red ball actually suspended in mid-air. I've waited my whole life for this moment,[12] and it's only going to cost me three human soulsˌ twenty three minutes of my brain being used as a computer processorˌ and . . . I know that humor says I should add a third ludicrous thing, but I'm out of ideas. The staff is ⹁however, named "Ludicrous".[13]

The price (the real one) was decent, I really wanted it, money changed hands, and then . . . you know, right? Call me, "Megan Willams,"[14] because I'm a human in Equestria. I think ⹁but am not sure, I'm in the gap between Rainbow Rocks and The Cutie Map. Go figure.

As mentioned, I know about displaced stories. You really can't not. I haven't read them, but I'm pretty sure I don't like them. Now I'm living one.

[1] Ok: No, it wasn't. Humor is basically the only thing that keeps me sane at this point, though. Let me have this.

[2] The one where humans don't have poly-chromatic skin and hair colors.

[3] Several points to make here. In no particular order:
⊙ By this I mean I was once ⦑a human like you⦒ not, "Like you, I was once a human."
⊙ This assumes that you are a human; if you are not, then I was once a human unlike you.
⊙ Furthermore, what was like you ⹁assuming you are human, about me was our shared humanity. We probably did have other things in common, but I do not know what they are. It should in no way be inferred that I was any more like you than any other human.

[4] Full disclosure: No, I don't. Not even a little. If you are attempting to communicate with me in an auditory kind of way, try harder.

[5] Which you don't. Unless you do. If you do, I'm actually kind of weirded out by the fact you're reading this. Unless reading this will assist you in building a portal from where I was to where I am ⹁thus allowing me to return, please stop in the name of privacy and/or not weirding people out.

[7] Main character from .hack//Sign. He was getting trapped in an MMO back before it was cool. If it is cool now. Even if it isn't cool now, I suppose it counts as being before it was cool provided that it wasn't being cool before or during his tenure trapped within The World.[15] Is it true that he did it before it was cool? No idea. Cool and I have never been on speaking terms.

[8] This ⹁I know, from experience.

[9] I don't always use rocks as wardrobe accessories, but ⹁when I do, I prefer Cu2(CO3)(OH)2. Stay thirsty my friends.

[11] Get my My Little Pony and Fullmetal Alchemist analysis from the same person? Sign me up. But you can't ⹁at least not without a time machine, because: see above. Took too fucking long to get my act together. Another in a long series of regrets.

[12] This isn't even hyperbole; it's just an outright lie.

[13] I'm not even making it up. It's not named that in the series ⹁and I'm a "Series only" kind of girl, but when looking something or other up I learned that it's a level 99 silver staff named "Ludicrous". So, there is that.

[14] She was the human main character of an animated TV series called "My Little Pony". You may have heard of it. She beat such luminaries as Tirek, Grogar, and the Smooze. Let it be known. She beat Tirek in her first appearance, because only suckers wait till the last episode of of season 4.[16] The book "Who Was Megan" is in the Fall of Sunset Shimmer in the dark magic section of Canterlot library, and ⹁in the same story, when Sunset first emerges into the human world, a flyer on the ground says that submissions to the CHS yearbook are to be brought to her or her siblings.[17] Look it up.

[15] You have to remember that this was a Japanese thing, so having it be called "The World" in English is like if we had an online game called "世界" or "せかい" or "sekai". It sounds a little bit less uninspired that way, doesn't it?

[16] I've never seen the G1 series and movies, so take that as you will. Tradition calls for taking salt with it. Also, Twilight Sparkle is not ⹁to my knowledge, a sucker.

[top] This is the end, I promised notes.

"Displaced" stories are stories where someone goes to a convention, finds a shifty vendor selling the one thing they need to complete their costume, buys it, and then gets dumped in Equestria as the character they were cosplaying as.  It's like a crossover, but without any of the established character traits, character history, or other such things that might interfere with it from being pure author/reader insert power fantasy.

It's difficult to get an accurate count, but there are very definitely over a thousand such stories.

I don't remember why I decided to try writing one.  I do know that I only made it as far as the long description (what's reproduced on this page) and then left it sitting there as an unpublished story with no actual content (long description doesn't count toward the word count, so by the standard metric it was literally a story with zero words.)

On Tuesday I added an "unpublished view password" which, as the name suggests, lets people view it even though it's unpublished.  The response I got from the person who took a look was pretty positive, so I decided to write an actual first chapter and then inflict the thing upon the world.

Tsukasa is, as noted, the main character from .hack//Sign.  He and it are described in some detail here.

Jen A. Blue is froborr.

The Oxford Comma Wars are entirely because we don't use reverse commas.  I'm probably, for what it's worth, not using them very well here.  (I don't have any more practice using them than the average person, after all.)

Replace commas with parentheses and you'll see the problem.  This isn't an article on commas; I'll stick to just one example.  It'll be an MLP flavored one.  (OC = Original Character; Red and Black Alicorn = edgy power fantasy; king = male monarch.)

First, with no commas:

We can punctuate this two ways:

It can mean three things:

The confusion is entirely tied up in the fact that we don't know if the first comma is the opening of an aside or not.  If it is, then whether or not there's a comma before the "and" changes the meaning drastically.  It it isn't, then the Oxford comma may be omitted without loss of meaning (but minor Oxford Comma Skirmishes may still be fought over the aesthetics of such an omission.)

Ideally we'd probably want three commas, opening, closing, and separating items in a list.  So, more or less, the comma versions of these things: (∣).  It's the lack of an opening comma, though, that causes confusion.  An opening comma would, presumably, just be a regular comma in reverse.
Posted by chris the cynic at 9:56 AM